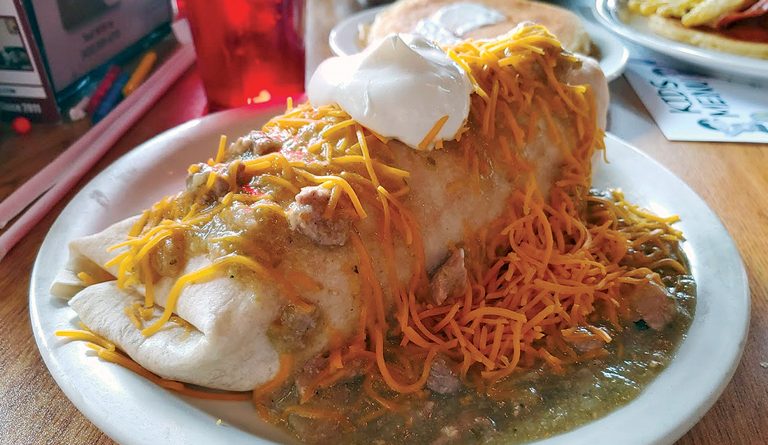 The breakfast burrito may be a simple feast, but there are masterpieces out there

Story and photo By Alex Springer

It’s easy to disregard the breakfast burrito as a work of mediocrity. But, like any act of creativity, such simplification runs the risk of overlooking something truly great. Yes, mediocre breakfast burritos abound, but the same could be said of all mainstream art, music and literature. Most of it is garbage, but there are always diamonds in the rough. There are burritos where cooks use a tortilla as a playground for finely layered colors, textures and flavors in the same way that artists use their canvas and oils—and here’s where to get them.

I’ve enjoyed many breakfasts at this establishment on the outskirts of Sugar House but none so unexpectedly soul-satisfying as their chicken verde breakfast burrito ($9.49). A lot of my affection can be attributed to the copious amounts of homemade chile verde that smother the burrito proper. The interior contains a balanced cargo of eggs, cheese and grilled chicken, but when it all collides with that herbaceous, slightly spicy chile verde, you get something magical. The burrito and the chile verde would be prime examples of edible artistry on their own, but there’s something complementary about the way they tease their flavors into delectable combinations that must be experienced to be believed.

While I appreciate a breakfast burrito that relies on the nuances of its ingredients, I also admire those that wind up and punch me in the face. Such is the Rise & Shiner ($7) at Sweeto Burrito. This monster wears its bold flavors and massive amounts of steak, eggs and tater tots like the arrogant luchadores from which Sweeto Burrito takes its aesthetic inspiration. Where I’ve been turned off by the often overpowering sweetness of the restaurant’s signature Neato Sauce elsewhere on the menu, the marinated steak, diced fried eggs and tater tots provide such a wall of savory that they’re a perfect contrast for the sauce’s sweetness.

I mainly visit Lone Star for fish tacos, but I can occasionally be convinced to try one of their bodacious burritos when I’m feeling particularly hungry. Their machaca burrito is a metric ton of cheesy scrambled eggs, pinto beans and fresh pico de gallo. Though most machacas I have known consist of a mixture of shredded beef and eggs, Lone Star flips that ratio—its machaca is primarily meatless. All the same, it represents an interesting contrast. Its size indicates a burrito that will slap you around a bit, but the freshness and quantity of the pico makes this feel a bit like a colossal veggie omelet. I recommend this for anyone seeking a burrito that cuts its savory notes with lots of tomato, onion and cilantro.

Much like the aforementioned Blue Plate Diner, Penny Ann’s is a bacon and eggs kind of joint that is secretly packing some breakfast burrito heat. There are two ways to get this entrée, and the smothered option ($10.79) with sausage is the way to go. I’ve tried it with ham and bacon, but the chile verde here doesn’t play as nicely with them as it does with some smoky, spicy sausage. I see this burrito and its cousin from Blue Plate as two sides of one coin. Where Blue Plate’s burrito is defined by its subtlety and balance, this one is more aggressive with its flavors—especially if you throw sausage into the mix.

There are a zillion of these places and their similarly named cousins around town, but the West Jordan location is where you can get a true masterpiece of the breakfast-burrito medium. I prefer this one with ham instead of bacon or sausage, but it’s consistently great regardless of the meat you take with you. I’ve visited this location several times, almost hoping that once they would mess this up and deliver something that was just OK, but every time I get a meal with the perfect ratio of eggs, cheese, grilled ham and potatoes. It’s nothing less than poetry.