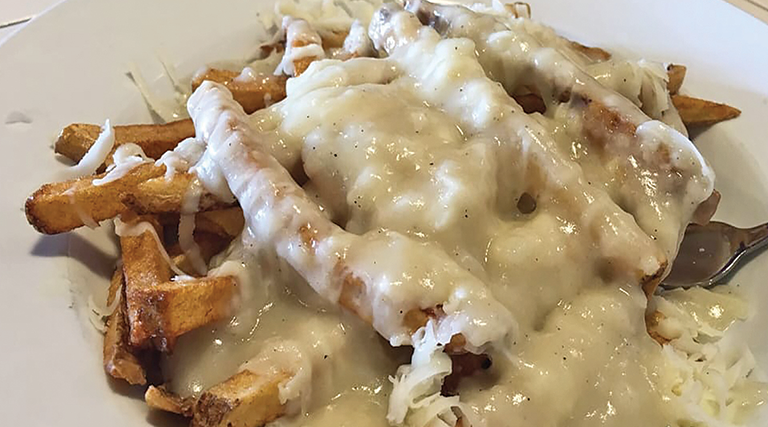 Friends who traveled to Canada for snowboarding trips inspired brothers Mac and Sam Spedale to add poutine—a French fries and gravy concoction—to the menu at Spedelli’s, the restaurant the Spedales co-founded in Salt Lake City in 2011. Poutine has been called Canada’s national dish. Several restaurants in Quebec claim to have originated poutine in the late 1950s. Mac Spedale believes Spedelli’s is one of the first Utah restaurants to offer poutine. “It has become increasingly popular over the years,” he says.

In Canada, poutine is usually made using cheese curds and brown gravy. The Spedales begin to make poutine by placing hot hand-cut fries on a large, salad-style plate that resembles a shallow bowl. They top the fries with shredded mozzarella cheese, and then pour hot chicken-based gravy over the cheese and fries. “The gravy melts the cheese and it’s really delicious,” says Spedale. “Lots of people eat it as an appetizer and share it with friends. Others prefer to eat it as a stand-alone dish.” He adds, “People eat poutine with all kinds of other foods; it appeals to anyone who likes French fries with a twist.” He says diners sometimes like to add meat to the poutine mixture. “They’ll add carne asada, pork or chicken. Meat changes the flavor of the poutine a little bit and adds some protein.”

Poutine, he says, is now more popular than ever.