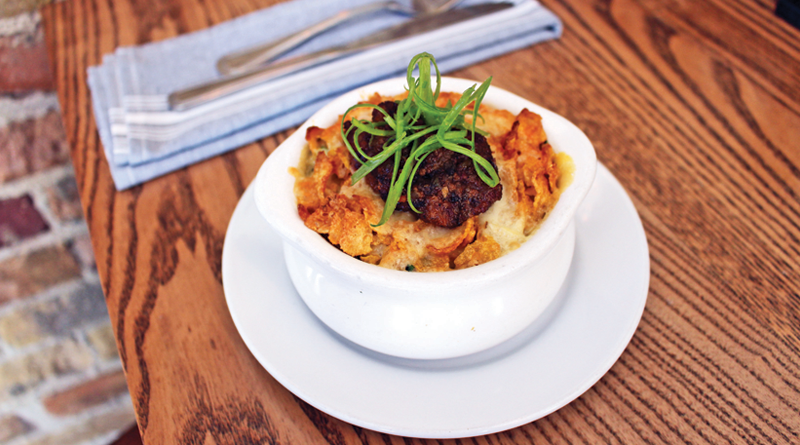 The first time I saw funeral potatoes on a menu in Salt Lake City, I thought, “Well, that’s a bummer of a name.” That was just a few short months ago, when my husband and I moved from Nevada to Utah and began indulging in the surprising amount of Southern-inspired comfort food we came across in our new hometown.

After a quick Google search explained the name (tip for Utah newbies: These cheesey spuds are often served after Mormon funerals or at family gatherings), I made it my mission to try as many versions of the dish as I could get my hands on because A. I love potatoes, B. I love cheese and C. I couldn’t get enough of that perfectly crunchy cornflake crust.

With either a cubed or shredded potato base, the dish is usually made with a cream-based soup, cheddar cheese, butter, onion, sour cream and of a crunchy top of cornflakes or potato chips. I was eager to see how restaurants around town put their own flair into arguably the most famous dish coming out of SLC.

At Orem’s 5 Star BBQ & Catering Co. (70 N. Geneva Road, 801-225-2685, 5StarBBQCompany.com), I tried my first “fun pot”—this version rolled into balls and coated in cornflakes before a trip to the deep frier. The crunchy exterior gave way to cheesy potato-y goodness. I was hooked.

Back in Salt Lake City, I scarfed down a homemade version made with shredded potatoes, cream of mushroom soup, cream cheese, cheddar cheese and breadcrumbs. The dish was topped with more cheddar and crumbles of cheese crackers.

At Garage on Beck (1199 Beck St., SLC, 801-521-3904, GarageOnBeck.com), I was reunited with the deep-fried variety—this version made with Idaho potatoes mixed with cheddar, jalapeño, bacon and onion, then rolled in cornflake crumbs and deep fried. Dunked in a side of ranch, it was a revelation.

Funeral potatoes have even found their way onto a burger at Fat Jack’s Burger Emporium (206 S. West Temple, SLC, 801-890-5155, FatJacksUt.com). The sinfully decadent Mormon burger not only has a slab of funeral potatoes (made crunchy thanks to the meeting of cornflakes and applewood smoked peppered bacon grease), but it’s heaped with bacon, pepperjack, the house sauce, lettuce, tomato and grilled onion. The technical term for a meal like this is “gut bomb.”

Just like the rest of the menu, they were comforting and creative, but not overly heavy. The shredded potatoes were mixed with white cheddar, gruyere and golden Velveeta cheese, chives, onions and heavy cream. The dish was topped with cornflakes, smoked cheddar and a sweet housemade bacon jam before heading into the oven to crisp up. Garnished with ribbons of scallions, the ooey-gooey, multi-cheese dish is fantastic alone, but the bacon jam takes it next level.

Many pounds of potato, cheese and cornflakes later, I am by no means a fun-pot connoisseur, but I will say this: Utah feels a whole lot more like home than when I started.