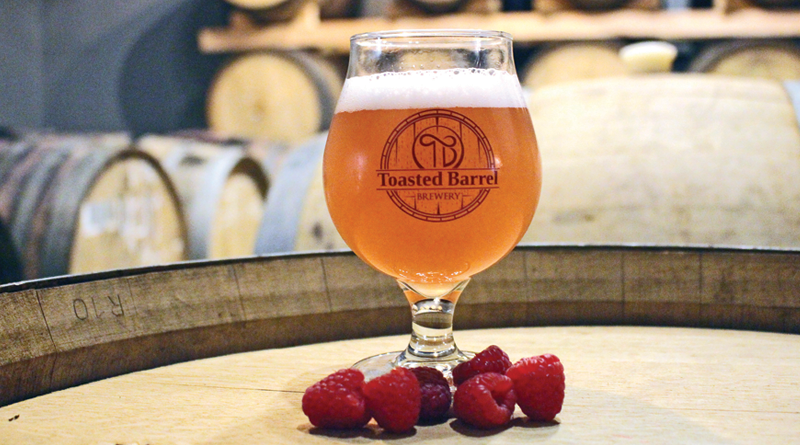 Summer is a time to celebrate local food. If you’ve done it right (by this food-obsessed writer’s standards), these past few months have been filled with new seasonal entrees at your favorite haunts, BBQ experiments with non-standard veggies (ever thought to grill your Caesar salad?) and runs to the farmers market for fresh fruit that you can casually throw into a rustic galette. You’ve tended an enviable edible garden, foraged for wild berries in the mountains and wowed friends with over-the-top crudite spreads.

As another beautiful summer sets on the Wasatch Front, it’s time to squeeze out that last bit of harvest fervor—and what better way to celebrate the bounty than with a boozy beverage? Forget the strawberry daiquiri. Move away from the bloody mary. The creativity of Salt Lake City’s establishments shines through in these four plant-inspired drinks. A little sweet, a little savory, we’re here to tell you that these drinks will not only delight your taste buds but will probably count toward your five daily servings of fruits and veggies (we said probably).

So, get your muddler ready—or better yet, grab an Uber to one of these joints—and enjoy a sip of summer. Cheers!

“The biggest compliment we’ve gotten is local beer clubs will come to buy our Berliner Weisse to teach judges what the beer is supposed to taste like,” says Sage Dawson, co-owner and brewer of Toasted Barrel alongside business partner Lynn Litchfield.

“We want all of our fruit beer to accentuate the fruit flavors of the beer, not say, ‘Wow! It tastes like raspberries,’” he adds.

The home brewers and friends opened the brewery and tasting room a year ago after noticing a gap in the market for sours and barrel-aged beers.

“Some people were dabbling a bit with sours, but not many,” says Dawson, noting that for many, the potential for contamination and attention required to make a sour can be a turnoff for some brewers.

Today, the brewing pair is pumping out creative fruit-forward beers like the Cantaloupe Weisseman, Black Current Sour and a Golden Sour with apricots and aged in a chardonnay barrel—all made with fresh fruit, never any concentrates. 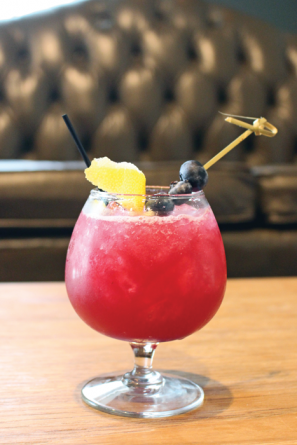 Ring a Bell?
The Ruin’s ever-evolving cocktail menu is chock-full of well-balanced fruity drinks that won’t leave you with a sugar hangover. While mint has long enjoyed its reign as the herb of choice in cocktails, basil is lately giving it a run for its money. In the Bluebell, you’ll find its subtle flavor mingling with blueberry and plum, all brightened up with a splash of lemon. It’s refreshing, simple and hard to order just one.

Add vodka, syrup, lemon juice and bitters to a shaker and mix well. Pour over ice and garnish with blueberries and lemon peel.

Blueberry basil simple syrup: Add 2 cups blueberries, ½ cup water, 1 cup sugar, 15 basil leaves and a squeeze of lemon juice to a pan and bring to a boil over medium heat. Reduce to a simmer and continue cooking and stirring for 10 minutes as the mixture reduces. Strain and store syrup in refrigerator. 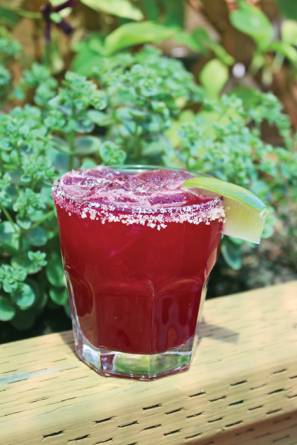 Beet-le Juice
With a focus on plant-based, vegetarian, raw and gluten-free dishes, it’s no wonder that Zest Kitchen and Bar is pumping out cocktails with veggie flair. The beet margarita has a brilliant color and earthy flavor thanks to the root vegetable, which is juiced in house. Orangey Patron Citronage Tequila, lime and bitters brighten up the drink, while agave adds a touch of sweetness. Rounded out with a healthy dose of Reposado Tequila, the drink is well-balanced and refreshing. Pro tip: Periodically wipe off the fuschia beet mustache while drinking this.

Put all ingredients in a shaker and shake for five seconds. Rub the rim of a glass with lime before salting. Add ice and pour drink over ice. Garnish with a lime wedge.

Kefir Madness
The Planter Banter is unlike any cocktail you’ve had before. It also might be the most difficult drink of the bunch to re-create at home, so perhaps a trip to the hip Rye restaurant for a cocktail and a meal of modern twists on American classics is in order. With a base of snap-pea-infused kefir (a fermented milk drink), the Planter Banter takes your taste buds on a adventure from tangy to nutty, savory and salty. It’s complex, yet well-balanced, and you’ll need to Google things like orgeat (a sweet syrup usually made from almonds, sugar and rose water or orange flower water).

Lightly blanch a handful of snap peas in boiling water before blending with kefir and straining mixture with a cheesecloth. Add 2 ounces of the blend with cashew orgeat, lemon juice, gin and rum to a shaker. After mixing, pour in a tall glass and garnish with fresh tarragon leaves and Himalayan sea salt.