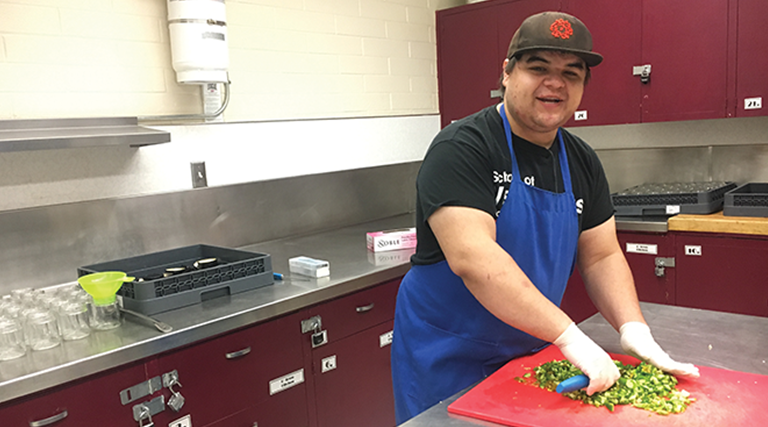 O-Town preserves give you the warm fuzzies

The Marshall White Community Center in Ogden is O-Town Kitchen’s new headquarters. That’s where you’ll find Isaac Farley mixing up his signature recipe for Still Untamed, a sweet and spicy pineapple-jalapeño jam with a nod to Ogden’s namesake. Jam is at the heart of O-Town, along with syrups and jellies, which are huge hits at local farmers’ markets from Logan to Provo.

Farley, founder of O-Town Kitchen, found himself homeless several times in his young life. After graduating and working steadily in a good job, Farley came to the “there’s got to be more to life than this” moment—and decided to do something gutsy about it.

“I was doing OK,” he said, “but wanted to do more and to give back to my community. With my experience volunteering at soup kitchens and food pantries, I knew I wanted to give back with food.”

He got his idea to help homeless people, especially those with families (some 45% of all homeless), from the Big Idea Program, an inventive business program at New York’s Impact! Design for Social Change. He understood the way most families end up homeless is by one or both parents losing employment. “I’ve been there,” he said, “so I understand the reality of homelessness…and it’s not the guy on the street corner asking you for some change.”

O-Town acquires ingredients from local sources that consider it unsellable or close to expiration. “There is so much food waste,” Farley says.“Over $161 billion U.S. annually in food (nearly 30-40%) gets thrown out. That’s edible food I want to capture from going into the landfills.”

The food is transformed into preserves by employees hired as part of an employment program for people facing emergency situations. When they’re not in the kitchen or selling at farmers markets, he accepts offers for picking fruit from trees during summer months. Staff earns income while creating something new.

“We like to create more non-traditional jams like our mango habanero and tomatillo lime, which make great gifts,” Farley says.

When asked how many employees he has, Farley notes, “We typically employ three to four at a time and have a 50% success rate of getting homeless mothers into transitional-type employment. It feels rewarding when they gain confidence and go on to do other things and are even more successful,” adding that some have gone on to nursing school and found great jobs. “We’re teaching them valuable skills, along with pride in creating a final product that is delicious.”

O-Town Kitchen’s jams, jellies and syrups are available online and at the Ogden and Logan Farmer’s Markets as well as Harmons and Smith’s grocery stores.

The organization is always looking for more vendors and partnerships with any interested organizations, including gift shops, cafes or caterers. Farley is available to conduct workshops and speak at events about the power of social entrepreneurship.