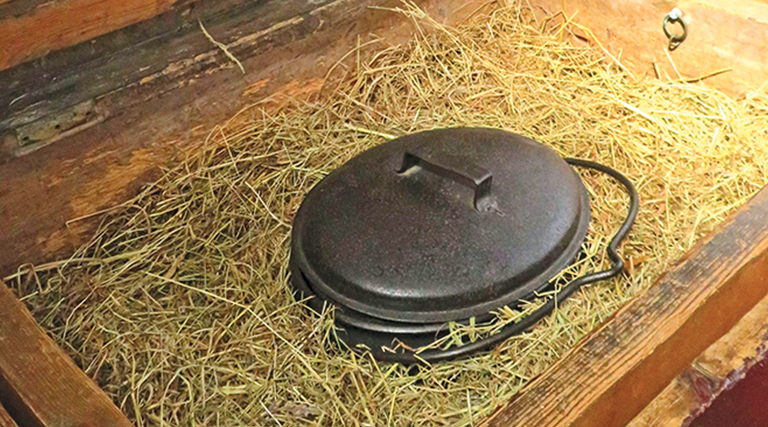 My grandmother devoted every Monday to laundry. It was an all-day job for a family of seven in the early 1900s. Bed sheets were boiled, dried on a clothesline and pressed with an iron heated on a wood stove. With no time for cooking dinner, she often relied on a hay box for a Monday meal.
Her hay box was made of wood, stuffed with hay, and topped with a quilted cover. It was essentially a slow-cooker without a heat source. She would put all the ingredients for stew into a cast-iron pot, boil for 10 minutes, cover and fit in a nest of hay. When the laundry was done, the stew was ready to eat.

My grandmother, a Danish immigrant, died before I was born. I know her indirectly through black-and-white photos, letters she wrote and my mother’s oft-repeated stories. One such story described rice pudding, Denmark’s traditional Christmas Eve dessert. By custom, a whole almond was mixed into the pot of pudding. Whoever got the almond in his or her bowl received a gift.

For sentimental reasons, I decided to tap my Danish heritage and attempt rice pudding in a hay box. It proved to be an exercise in expediency when I opted to use an ice chest instead of making a plywood box. I filled the chest with hay and used an L.L. Bean down vest for an insulating cover.

An Internet search dredged up advice from “fireless cooking” enthusiasts. Their blogs asserted hay boxes were foolproof. No chance of burning the food or overcooking it. They offered two caveats: Double the cooking time and reduce liquids by 25%.

Rice pudding recipes are mostly the same—rice, milk and sugar spiked with either cinnamon, vanilla or cardamom. Into a cast iron pot, then, I dumped a half-cup Arborio rice, a half-cup sugar, and 4 ½ cups of whole milk. I boiled the mixture for five minutes and then tucked the covered pot into the hay and topped it with the puffy vest. I waited for two hours before lifting the lid for a sample. The rice needed more cooking. I re-heated the pot and put it back into the hay. Two hours later, I tested it again. The rice was perfectly cooked, but it was soupy. I drained off the excess milk, stirred in two teaspoons of vanilla and put in the refrigerator.

As much as I enjoyed the toothsome outcome, cooking rice pudding in a hay box fell short of the resonance I had hoped for. At no point in the process did I feel I was channeling my Danish grandmother, and I don’t rule out that my expectations were colored by a “good old days” bias. No doubt my grandmother would have happily used a washing machine and a crockpot since only survivalists and Amish elders would privilege 19th-century technology. We can agree that the good old days weren’t as good as we think they were.

Nevertheless, the truth is that neither hay box nor crockpot makes a difference: Rice pudding, sprinkled with cinnamon, is always delicious.