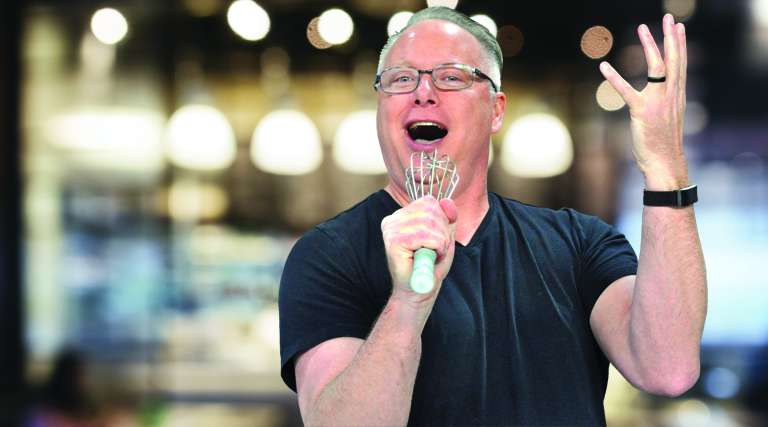 Chef Bryan Woolley began his cooking career more than 25 years ago in Logan where he had graduated from Utah State University—not with a food-science degree—but with a bachelor’s in music. In fact, he went on to distinguish himself as a globe-trotting tenor. On his singing travels, his interest in cooking led him to take classes with European master chefs, where he gained culinary skills and knowledge.

He eventually returned to Logan and started teaching a breadmaking class at Love to Cook, a local kitchen store and culinary shop. One day, out of the blue, a producer at Fox 13 News in Salt Lake City called the shop, seeking a chef for a cooking segment. The phone landed in Woolley’s hands, and he accepted the job then and there.

Over the years, Woolley has taught cooking classes at the University of Utah and Sur La Table. He eventually landed a gig at KUTV Channel 2 in 1999, where he has hosted Cooking With Chef Bryan for more than a decade.
But he admits it was in his mother’s kitchen where his love of cooking began. “I liked to cook because it was my time with Mom,” says Woolley, who was born and raised in Preston, Idaho. His eyes light up as he reminisces about his childhood baking all types of breads and pies with his mother, Louise. “She came from the Depression era, so she can cook anything with simple ingredients.”

This down-home approach learned at his mother’s side is visible in Woolley’s own cooking style. Each recipe he shares showcases flavorful and easy dishes that enable any home cook to be successful. “I want anyone to be able to go to the local grocer, find ingredients and create something delicious. It doesn’t have to be complicated.”

Mondays through Fridays, you can catch Woolley’s Fresh From the Kitchen segments as part of KUTV 2 News at Noon. On weekends, he produces his own program, Cooking With Chef Bryan, a half-hour show that airs on KUTV Channel 2 on Sundays at 6:30 a.m. as well as on KMYU digital channel 2.2 at 5:30 a.m. on Saturdays and 11 a.m. on Sundays.

Editor’s note: Eleni Saltas is an occasional guest on Chef Bryan’s cooking segments where she shares her Greek recipes.

I’m frequently asked what I like to cook at home. Honestly, the last thing I want to do after work is cook more food. My go-to happens to be a hearty sandwich with chips. I always have the fixings for a sandwich and generally have homemade bread to enjoy it on. Of course, this isn’t to say I don’t prepare a tasty meal at home, but I like keeping it simple.
Growing up, my mom baked the best bread, and it wasn’t until I was older that I learned to appreciate it. My childhood friends ate store-bought bread, and I didn’t want to be different back then.
I now see that breadmaking is an art everyone should try. Without the preservatives that are in store-bought bread, homemade bread doesn’t stay fresh as long. For this reason, bake small batches and freeze the bread you’re not ready to eat.
Here are recipes for a delicious sandwich made with homemade bread so you can experience the hearty sandwiches of my childhood.

Process
Spread mayonnaise and mustard on both pieces of sliced bread.
Add the roast beef, cheddar cheese, Roma tomato slices, and iceberg lettuce. Salt and pepper to taste, slice and serve with your favorite chips.

Process
To make the dough, combine the ingredients into the mixer and mix for 15-20 minutes. If needed, adjust the water or flour to create the dough.
Grease a large bowl with vegetable oil spray and transfer the dough to the large bowl. Spray the dough with vegetable oil, cover and let it double in size.
Divide the dough into 4 equal parts.
Take one of the dough portions and press it into rectangle about 8 inches by 6 inches (more or less). Roll the dough up into a long cylinder like a French loaf of bread. Repeat with remaining dough.
Spray two baking sheet with vegetable spray and place two formed French loaves on each baking sheet.
Spray the dough with vegetable oil spray and allow it to double in size.
Preheat your oven to 400 degrees and bake the bread for 25-30 minutes or until it begins to brown, and the bread has baked through (internal bread temperature should be 195 degrees.)
Remove the bread from the oven and let it cool completely before slicing.