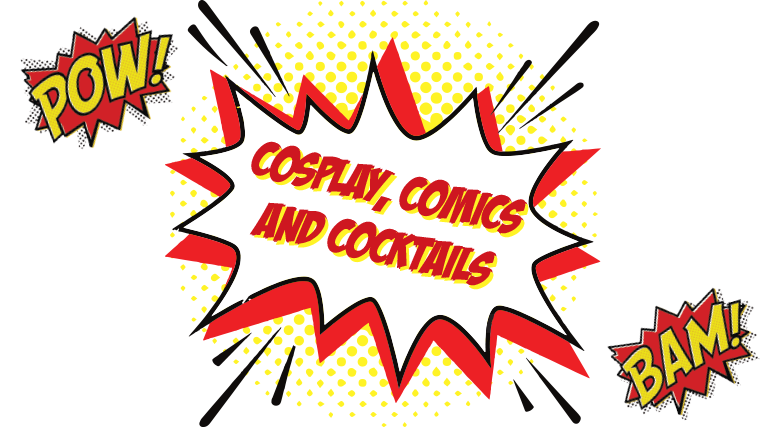 Kickass drinks that let you get your geek on

When compiling this compendium of cocktails inspired by characters in cult movies, TV shows, comics and video games, it quickly became clear that an obsession with craft and details is a quality that booze geeks and fandom nerds have in common. “It’s really the golden age of geekdom,” Watchtower Café co-owner Mike “Tui” Tuiasoa says of today’s fandoms, with blockbuster movies bringing to the big screen what comics fans have always loved about the heroic characters of Marvel, DC and more. To get the 411 on what Utah’s geeks are inspired by when they’re imbibing, we talked to a cross-section of the beehive’s nerdiest business owners and cosplay aficionados.

“This drink is a good example of what we do at Quarters,” arcade bar co-owner Katy Willis says of the Falcon Punch. “It’s grounded in classic cocktail traditions, technique and great ingredients, but we make it goofy and interesting.”

Willis describes the menu as “playful and approachable” with drinks like The Hulk Smash (with gin and green chartreuse) and the Fate of Carmine (black rum, Campari and coffee rum), all at a very reasonable price point.

Inspired by an old-school Tea Punch, they named the Falcon Punch cocktail after the Super Smash Bros. character in the racing video-game series F-Zero who calls out “Falcon, punch!” and “Falcon, kick!” during the action.

Eccleston agrees. “Just ask!” he says. “We’ll put a glow cube in your beer, and it looks awesome.” 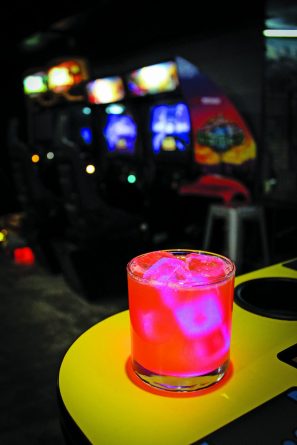 Combine all ingredients except kombucha. Short shake and strain over fresh ice in a large rocks glass or collins. Top with kombucha. Serve with a purple glow cube.

With a closet full of cosplay options, Lisa Romney admits that Buffy the Vampire Slayer has the most nostalgic roots for her. “I probably watched the Buffy movie 25 times in high school. It’s a classic of the Valley Girl era,” she says, though her current costume is more in line with the popular Joss Whedon TV series that followed.
With her late husband, Steve Edwards, who died in 2016, Romney found a partner who was equally obsessed with living large and pursuing creative passions from collecting rare whiskey to participating in elaborate costume party events.
“We didn’t ever want to do anything half-assed,” Romney says of the philosophy that’s still her default, and it translates to exacting detail in her self-made cosplay costuming from steampunk Hullabaloo to X23 to Star Girl. Her advice for creating exceptional characters? Keep the concept in line with what’s well known: “If you get too far away from the original Buffy, you’re just some blonde girl wearing pleather,” she says.
Inspired by Buffy’s counterpart, Angel, we photographed Romney imbibing a spin on an Angel’s Envy rye whiskey sour, served with a rosemary-skewered cherry “heart,” of course.

Dry shake all ingredients (without ice), then shake again with ice. Double strain into a double old fashioned glass over a large ice cube. Add a dash of aromatic bitters to the top and garnish with a rosemary-skewered cherry.

The Watchtower Café comic store-slash-coffee shop embraces all fandoms from Star Wars trivia to the latest gaming obsession. For the past three years, the shop has been an oasis for those who love fantastic La Barba coffee, boba teas and handcrafted sodas.

Most have geeky references like “Donkey Kong” iced coffee smoothie with banana, and new to the menu, a drink inspired by co-owner Mike “Tui” Tuiasoa’s hands-down favorite character, Aquaman. “To have a Pacific Islander character that looked like me and shared my culture was really amazing,” Tuiasoa says of his love for the comic hero.

With four shots of espresso and coconut milk, the powerful latte called The King of Atlantis is liberally spiked with their house-made Tongan caramel, which is so popular that they sell it by the bottle. Both shop owners have areas of professed geekery, with Tuiasoa leaning toward comics and superhero films while his partner, Cori Hoekstra, is an acknowledged fan of sci-fi, fantasy and horror.

But one thing they have in common is their love for coffee and coming up with a great concept. “The drink has to fit the character,” Tuiasoa says. “Every geeky reference is made with intentionality.” They also happen to be delicious.

As one of Marvel’s most psychologically complex antiheroes, The Punisher character has seen many comic iterations since he was first introduced in a 1971 issue of The Amazing Spider-Man. “Like Wolverine, he’s a tragic figure born of loss,” Black Cat Comics store owner Greg Gage says of the character Frank Castle’s appeal. “He’s a vigilante, but he’s in a constant struggle to find integrity among the many things he’s told he should or shouldn’t do.”

A life-long lover of comics, Gage still has the battered X-Men comic he received as a gift when he was 4 years old. His Sugar House emporium will celebrate 15 years in business this May as a source for vintage and new comic releases.

We decided a dark-hued cocktail poured over a large ice sphere would be the perfect moody accompaniment with which to flip through an issue of The Punisher—or catch up on Second 2 of the Netflix original series. I based the drink on a pre-Prohibition classic, the Blood and Sand, with a spicy dark syrupy twist thanks to an addition of activated charcoal.

Note: While activated charcoal is a detoxifying ingredient used for centuries, it doesn’t discriminate about which elements in your digestive system it’s intended to absorb (or adhere to) for elimination. So, unlike members of the Marvel Universe, mere humans should be aware: While it looks really cool, activated charcoal can interfere with the efficacy of medicine.

Add all ingredients to a shaker with ice and shake until combined and well-chilled. Strain into a double old-fashioned glass over a large ice sphere.

*To make the spiced black syrup: to a re-sealable glass jar add one 280 mg capsule of activated charcoal cut in half to release the contents (it’s messy!), 1 tablespoon agave nectar, one 4-inch cinnamon stick broken in half, one star anise pod and one cup hot water. Add lid, shake to combine. Steep for 3-4 hours, and then strain to remove solids. May be kept refrigerated for 2 weeks. Shake well before using.