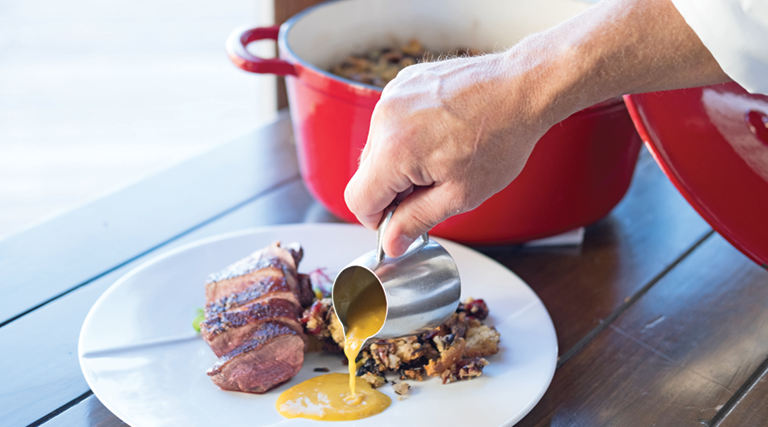 Along with pumpkin pie and cranberry sauce, stuffing (or dressing) makes Thanksgiving the grand feast that it is. Advance preparations often include crumbling dry bread, preparing savory stock, chopping aromatics and assembling spices such as sage and poultry seasoning. But once you’ve gathered your ingredients, it’s mix, heat and serve. Simple!

However, the chefs featured here take a few extra steps to make decidedly “un-simple” dressings. Their use of stuffing as a vehicle to bring together layers of flavor and complex ingredients argues in favor of making reservations for a Thanksgiving meal at their restaurants, which is also simple! Check out these delicious offerings: 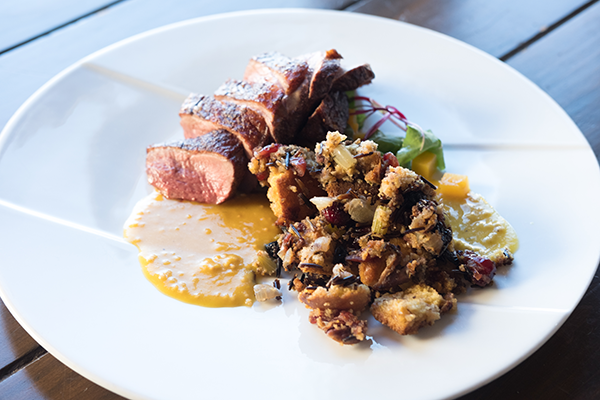 Chef Zane Holmquist: Wild rice, mushroom and berry stuffing
Delectable Thanksgiving stuffing employs quintessential ingredients that vary depending on locale, explains Zane Holmquist, vice president of food and beverage operations and corporate chef for Stein Ericksen Lodge. “Stuffing ingredients in Hawaii vary from those in Maine,” he says. The stuffing he plans to create for this year’s Thanksgiving event at the iconic lodge combines two different recipes, “a variation of two selections of Americana,” he says. Holmquist is utilizing traditional American ingredients—blueberries and cranberries along with indigenous wild rice and wild mushrooms. His blended recipe also calls for traditional Southern cornbread and oysters along with wild rice pudding bearing a Northeastern Great Lakes flair. He’s incorporating ground duck this time around, but a possible meat variant would include equal parts ground chicken and ground pork. His assembled stuffing “is simple, but has some great textural pieces,” he says. “The idea of creating a stuffing casserole from wonderful ingredients is fun to do throughout the year.” 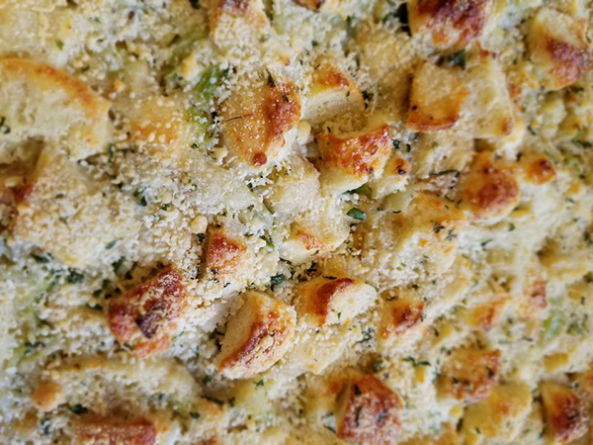 Chef Harvey Howard: Parmesan stuffing
Each year, diners and staff at Magleby’s in Springville anxiously await chef Harvey Howard’s signature stuffing. This creation highlights a holiday buffet that includes carved turkey, prime rib, housemade cranberry sauce and 15 side dishes. Howard’s stuffing bears a delicate crispness on top, hovering over layers of amazingly moist and delicious flavor. To cubed bread, he adds sautéed celery, onions, butter and fresh sage. The addition of parmesan cheese enriches the sumptuous and satisfying texture and flavor. The proper amount of chicken stock is laced throughout then added on top, and assures a tender moisture that is a Magleby’s trademark. 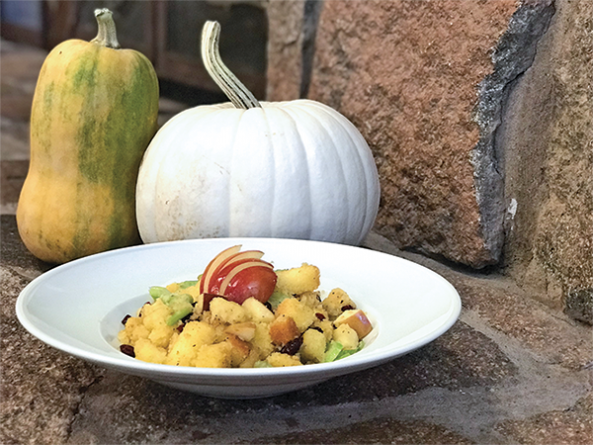 Chef Scott Sniggs: Cornbread apple stuffing
Located at the base of Mount Ogden, beautiful Earl’s Lodge, with its wraparound windows and panoramic view of the Snowbasin Resort ski runs, hosts its annual Thanksgiving feast. And executive chef Scott Sniggs is, once again, coming up with some special stuffing. Last year, it was apple sausage. This year, Sniggs is creating a cornbread stuffing with ingredients that include fresh apples, fresh cranberries and real butter along with freshly chopped sage. He adds corn bread and chicken stock before baking his delicious concoction to create “a nice crunchy top, then you can dig down to that pillowy moist stuff,” he says. The stuffing accompanies a turkey brined for two days in a molasses solution before being slow-roasted on Thanksgiving Day. Yukon gold mashed potatoes, fresh yams and a streusel-topped butternut squash round out Snowbasin’s Thanksgiving feast. 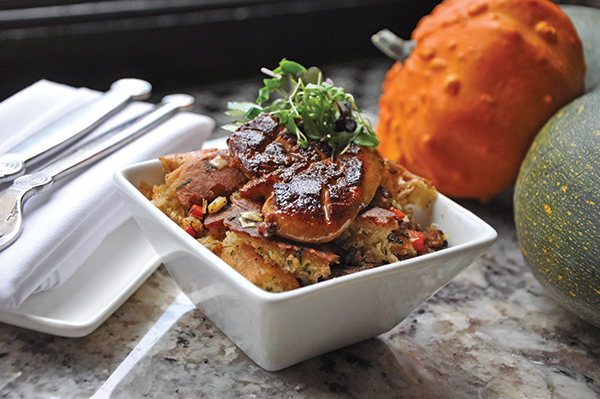 Chef Nathan Powers:
Two-bread stuffing with liver pâté
This year marks Bambara’s third year of Thanksgiving service. For his 2018 stuffing, executive chef Nathan Powers plans to combine crumbs from two breads—brioche and sourdough—to achieve the optimum texture. He fashions a delightfully flavorful stock from a mixture of foie gras, turkey livers and cognac. Further enhancing the flavor, “I like to add lots of aromatics—mushrooms, leeks, carrots, onion and celery,” he says. Powers piles this elaborate mixture into a baking dish, covers it for the majority of the cooking time, then pulls the cover off to let the top brown above the delightful moisture below. “The best parts are the meats—foie gras, bacon and turkey livers—the bread is just a vehicle,” he says. 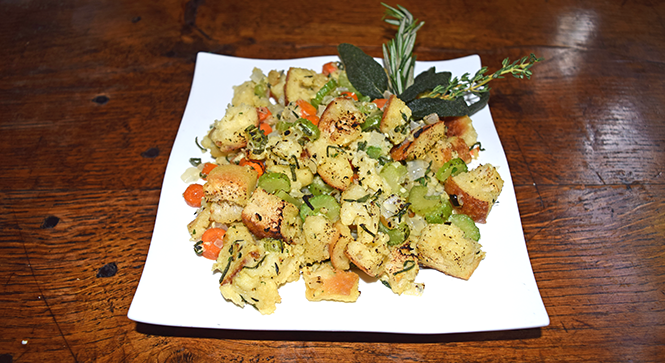 Chef Eric May:
Herbed sourdough & turkey meat stuffing
Blue Boar Inn’s executive chef and general manager Eric May begins making his signature stuffing by dicing housemade sourdough French bread into half-inch pieces. He then braises turkey legs separately from the rest of the bird. He adds fresh herbs to the resulting stock, which he then uses to add moisture to the stuffing. Along with dark turkey meat, the herbed stock is the basis for the accompanying brown giblet gravy. May sautés flavorful celery, onions, carrots and garlic until the onions are translucent. He says he also adds more fresh herbs when combining all the ingredients before “putting it into hotel pans to bake it” to achieve a delightful crispness on top and delicious softness beneath.