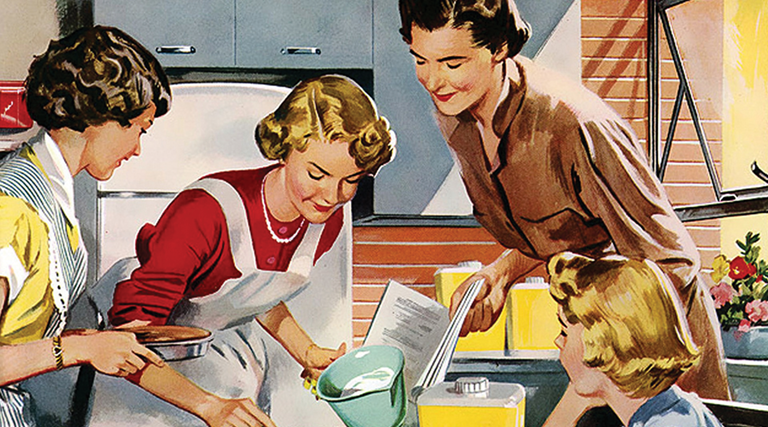 Food prep of yesteryear was all about picking, shelling, peeling and shucking

For some people, eating out is an occasional treat, thought about and planned for all week. For others, eating out is the norm. “What are you in the mood for?” a spouse or friend might ask as they scroll through Yelp seeking inspiration. It’s become so fashionable not to cook at home that the average household spends more than $3,300 annually on dining out, according to the Bureau of Labor Statistics.

Even with the Food Network and a preponderance of cooking shows, it’s sad to say the number of Americans who enjoy cooking is on the decline, with Harvard Business Review research noting almost half say they hate to cook.

Not everyone grows up in a home where wholesome meals are routine. But for those who do, memories of the foods and preparation can last a lifetime.

I was raised on farms where home cooking was a daily necessity. As kids, we loaded our red wagon with two 20-gallon steel containers and headed to the milk house to fill them from a giant, stainless-steel vat where the day’s unpasteurized collection was stirring. We drank this milk with every meal—poured over oatmeal and Cream of Wheat for breakfast, in a glass to wash down sandwiches for lunch, and served in soups, sauces, baked goods and puddings for dinner. We also used whipped or clotted cream on just about anything.
I began cooking for the whole family early on, using skills I learned from my mother by standing on a chair beside her overlooking the stove. We raised Black Angus cows, and thus had a deep freezer full of meat. So our meals consisted of hearty stews, soups, chili con carne, pot roasts, burgers and casseroles until late winter when we were scraping the bottom. That’s when we ate kidney stew and oxtail soup, roasted beef heart and cold tongue sandwiches.

Leftovers never went to waste, so yesterday’s roast would be ground with a hand grinder and added to seasoned gravy, topped with day-old mashed potatoes and baked in a shepherd’s pie. Biscuits, cornbread, egg noodles or potatoes accompanied almost every dinner. All vegetables came out of our garden. We ate what was in season and froze the rest. During the summer, we were always picking, shelling, peeling, shucking or cutting up produce. We canned spiced peaches and gallons of applesauce, and we made crabapple jelly and raspberry jam.

Mom was a terrific bread baker. Her cinnamon swirl was our favorite. When my three brothers started making food disappear faster than it could be made, I stepped up production of made-from-scratch chocolate chip and oatmeal cookies, brownies, apricot crunch, pineapple upside-down cake, apple crumble, Boston brown bread and pound cake. I always made my own pie crust and frosting.

At Thanksgiving, my father would smoke our turkey to perfection with presoaked apple wood. The neck meat and giblets were added to the gravy. The meal seemed endless as we ate the remainders for days, but the soup was always the delicious finale.

Ernest Barth was raised on a dairy farm in central Wisconsin where his family worked hard as subsistence farmers. They used Clydesdales to plough their fields instead of a tractor. The family raised and grew their own food. They also hunted and foraged in the woods. Foods had to be smoked, canned, cured, dried or put in the root cellar because they didn’t have electricity. His mom, who worked as a maid, was a terrific cook who made delicious cakes and pies filled with wild blackberries, raspberries and blueberries that Ernest picked. She baked bread, made fudge and caramel popcorn balls, and prepared heavenly hash, roasts and stews—all on her huge wood stove.

They would shock and thresh their own oats and traded some of their milk for butter and cheese at the milk factory. She kept a store of sugar and a 20-pound sack of store-bought flour. Vendors from Raleigh and Watkins came by the farm to sell baking sundries such as baking soda and powder, vanilla, herbs, flavorings and notions.

Their garden harvest included potatoes, squash, tomatoes, carrots, cabbage, cucumbers and dill. They picked green beans from a large patch and sent them to the canning factory for a few extra dollars. Chickens provided eggs while hogs, cows, ducks, geese and guinea fowl provided the meat. Ernest added to the menu by hunting rabbit, squirrel, partridge and pheasant. Hunting deer in winter meant it could be hung outside and stay frozen.
On Thanksgiving, a goose or turkey was served with wild cranberry sauce, sauerkraut, pickles, potatoes and dressing. Family and friends from the far-flung farming community contributed baked desserts and green Jell-O with carrots.

Vee Kelsey-McKee was raised on her family’s three acres in New Harmony, Utah. Her father had a productive garden and orchard with apricots, apples, pears and grapes. They kept a cow and pig as well as chickens for meat. Plus, the fall hunt provided venison. From an early age, Vee was in charge of weeding the garden. By the time she was 12, her mom had taught her to cook and help with canning, freezing and preserving food. They dried produce in a drying enclosure her father built that sat in the sun and featured pull-out trays. He also brought home fresh-caught trout that they chopped—skin and bones included—salted and stuffed into half-pint jars that preserved the meat like a can of tuna.
Kelsey-McKee has rich memories of home cooking: Eating a simple lunch of fresh picked, lightly sautéed, baby beet greens with butter and a squeeze of lemon is one. On Sundays, her mother would prepare fried chicken by dredging the chicken, unskinned, in egg and flour, then searing each side in an electric frying pan. She’d turn the heat down so it slow cooked while they were at church. Her orange rolls made with fresh oranges and zest were a staple at Thanksgiving.

Due to growing up on farm cooking, Kelsey-McKee continues to seek ways to improve her food quality. Today, she tries out foods from other cultures and makes her own cheese and yogurt. She has noticed more people in her circle who want to prepare food at home to avoid harmful or unwanted additives and to be assured of quality.

It’s fun to eat out, but nothing beats the fresh taste of your own produce and meat. The question is, who has the time and skills to undertake homemade food preparation these days? At least we still have Thanksgiving to remind us to savor home-cooking.