A novel approach to horror and hooch

Queue up the e-reader, load up the audio book playlist or go old-school with a printed volume and the option of skimming past the really scary parts. Or, in my case, flipping ahead to see if the heroine makes it out alive. No matter how you choose to peruse, check out these horror novel classics recommended by local literary experts for your October delectation. If you try out the following cocktail suggestions while reading, the only things being tortured might be your liver and your imagination. The ability to ignore things that go bump in the night? That’s another kind of torment, altogether. 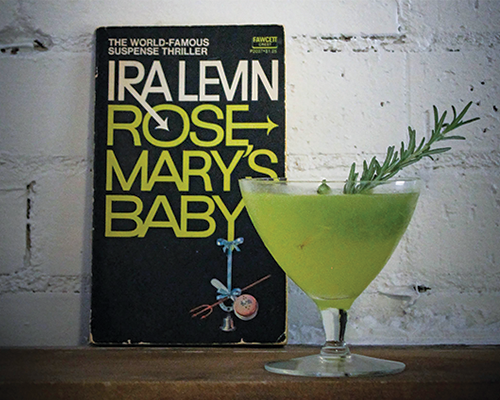 When frequent Devour contributor Amanda Rock isn’t writing about her favorite vegetarian eats, you’ll often find her immersed in reading classic horror stories or working on her own scary script. Her cocktail suggestion pulls from a novel I saw first as a movie and have never quite recovered from watching; anyone else not able to look at a mirror in the dark? “Rosemary’s witch neighbors gifted her a ‘good luck charm,’ a simple pendant filled with the fictional herb, Tannis Root,” Rock says. “The necklace had a strong, pungent odor and possibly helped Rosemary conceive Satan’s baby.” We agreed this would make a fantastic botanical-focused cocktail. Inspired by Rock’s description, I shook up an herbal and spirit-forward spin on a classic Last Word cocktail using local liqueurs and bitters, and a rosemary garnish for that extra fragrant oomph.

Method: Add all ingredients to a shaker with ice; shake until tin is frosty. Strain into a chilled coupe glass; garnish with a fresh rosemary sprig. 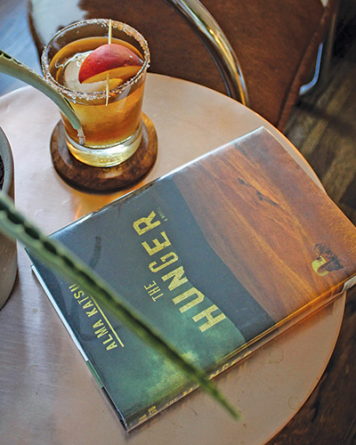 As if the harrowing tale of the doomed Donner Party of 1846-47 wasn’t already the stuff of nightmares, Alma Katsu’s third novel melds historical accounts of the trek with a decidedly supernatural and terrifying turn. Associate librarian Stephanie Howell at the Sprague Library recommends this novel both because of its can’t-put-it-down pace (it has already been picked up for a movie adaptation) and Katsu’s significant nod to the local landscape. A big chunk of the book takes place in Utah: the emigrants’ 80-mile salt flats trek south of the Great Salt Lake followed a route proposed by Lansford Hastings, a choice made with legendarily disastrous results. Howell suggested that I create a cocktail featuring Utah bourbon and salt, and she provided the perfect name: Hastings Cutoff. With ingredients inspired by our region’s settlers who had better luck, this salty local spin on an Old Fashioned is a perfect snowy-night sipper to accompany this edge-of-your seat atmospheric novel. 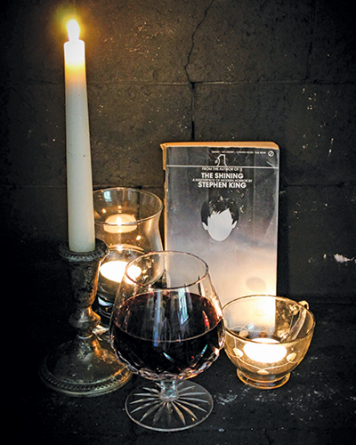 The Cocktail:
redrum
The Book:
The Shining
by Stephen King (1977)
Recommended by: Kate Jarvik Birch, visual artist and author

No compendium of horror stories would be complete without at least one mention of the medium’s master, Stephen King. Utah visual artist, playwright and author (her published novels include the Perfected trilogy and Deliver Me) Kate Jarvik Birch says that, as a kid, she was hooked on the Scary Stories To Tell in the Dark series and thought she was ready for her first real horror novel. She picked The Shining and says, “I only read half of it and was so freaked out that I could hardly walk past its place on the bookshelf at night. It had a shiny silver spine that stared out at me wherever I was in the room, like those eyes that follow you on paintings in scary stories. If that’s not the tell-tale sign of a successful horror novel, I don’t know what is. …” While reading about the resident evil inhabiting the Overlook Hotel, sip this adaptation of a Bishop Cocktail, a potent circa-1930s rum-and-red wine concoction that in some recipes called for over 3 ounces of high-proof rum per serving. You’ll ideally do so on a snowed-in night when you’ve no plans to drive anywhere, as this version of the drink is still pretty potent even after reversing the historically booze-heavy proportions.

Method: Add all ingredients to a shaker with ice and shake until just chilled. Strain into a large red wine glass or goblet. 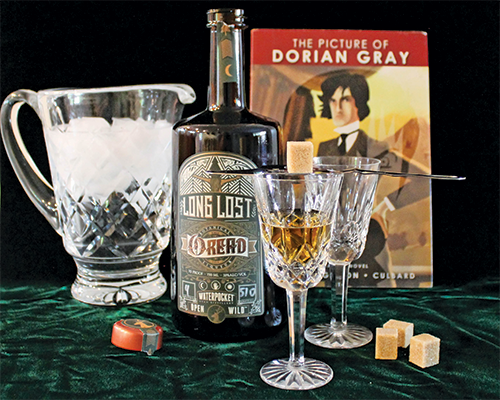 The Cocktail:
The Pitcher of Oread Gray
The Book:
The Picture of Dorian Gray
by Oscar Wilde (1890)
Recommended by: Alan Scott, Waterpocket Distillery

Part morality play, part horror plot, all wrapped up in Wilde’s oft-censored and boundary-pushing exploration of human sensuality, hedonism and debauchery. It seems fitting to pair The Picture of Dorian Gray with a tipple reminiscent of the era, a time that celebrated a diversity of bitter, sweet, bold and savory flavor profiles. Booze historian, distiller and spirits resurrectionist Alan Scott developed Waterpocket Distillery’s Oread Botanical Liqueur as an homage to the complex flavor profiles of rare 19th-century Danzig spirits. One can easily imagine the self-indulgent character Dorian Gray reveling in the mercurial beauty of the Greek mountain nymphs known as the Oread, and being in equal parts impressed, compelled and horrified by their glamorous powers.

Method: Like many artists of his time, Wilde famously (and prodigiously) imbibed absinthe. An anise-forward high-proof liquor, absinthe is traditionally served with a cube of sugar perched on a perforated flat spoon, over which patrons drip ice water to dilute the volatile spirit to taste. Use the same technique to slowly add ice water from an absinthe spigot (or small pitcher) to Utah-made Oread botanical liqueur. 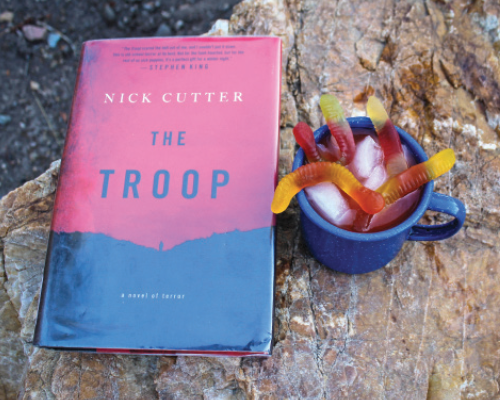 The Cocktail:
The Boy Scout’s Demise
The Book:
The Troop
by Nick Cutter (2014)
Recommendation and recipe from: Claire Margetts, The King’s English Bookshop

The King’s English Bookshop has been matching books to readers of all ages since 1977, and its knowledgeable and helpful staff is legendary in SLC and beyond. Case in point: Upon request, bookseller Claire Margetts recommended not just one, but two horror novels and provided fantastic thematic cocktail recipes to go along with them. She nominated The Troop as a contemporary spin on classic horror tropes—think Lord of the Flies meets Walking Dead—set during a weekend scout camping trip in the Canadian wilderness that quickly goes off the rails (or would that be trails?) straight into Gore-town. Full disclosure: I was so terrified reading the reviews and fly jacket of The Troop that I haven’t (yet) made an attempt to start it, especially after an equally unsuccessful scaredy-cat attempt at reading Nick Cutter’s 2015 novel, The Deep, last year. So, I’m thankful that Margetts thoughtfully provided her recipe for a festive happy-camper sipper to go along with the heebie-jeebies and goose bumps, campfire snacks (aka gummy worms) included.

Method: add all ingredients to a cocktail shaker with ice. Strain into a Collins glass (or enameled metal mug, if you’re camping) filled with crushed ice. Add a splash of grenadine; do not stir. Garnish with gummy worms. 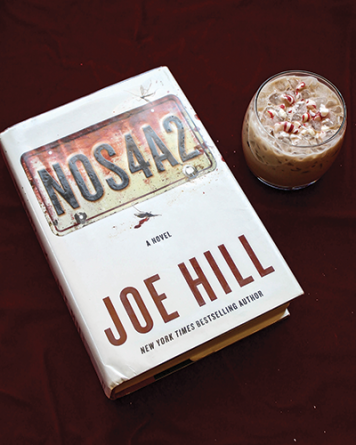 Classic horror cinema fans will immediately get the creepy Nosferatu reference. Here, it’s the license plate on the 1938 Rolls-Royce Wraith driven by author Joe Hill’s terrifyingly developed character Charles Talent Manx, who lures children Pennywise-style with car rides that transport them forevermore to Christmasland, a magical and terrifying amusement park where “Every Morning is Christmas Morning.” The book’s protagonist, Victoria McQueen, is the only kid ever to escape Manx; that is, until years later when he abducts her son, Wayne. Don’t wait until December to pick up this mighty tome (the hardcover comes in at just shy of 700 pages) recommended by The King’s English bookseller and horror expert Claire Margetts. While you’re at it, stir up her minty holiday homage to a White Russian. It’s pretty tasty any time of the year; candy cane garnish is optional.

Method: Assemble all ingredients in an Old Fashioned glass, stir well. Fill to the rim with cracked ice and garnish with a candy cane or crushed peppermints.