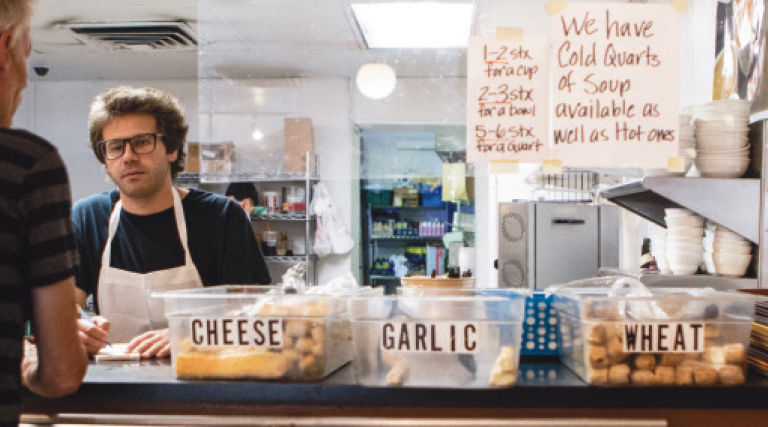 The Soup Kitchen: Four decades of comfort with breadsticks

On a late August afternoon visit to the Soup Kitchen in the heart of Sugar House, several diners are hunched over their bowls as warm as the temperatures outside. Perhaps the restaurant’s biggest compliment is that even scorching summer temps don’t deter patrons from seeking solace in a bowl of soup for a late lunch or picking up a quart to-go.

Third-generation Soup Kitchen manager Ian Mauro isn’t too surprised by this, as each year, he and others involved in the family-run business still see a steady stream of customers during summer’s sweltering months.

But like clockwork, Mauro and his family know the rustling leaves of fall and impending storms of winter signal a big shift in business, just as it has since Mauro’s grandparents, John and Betty Aitken, opened the restaurant 42 years ago. It takes but a glance at the weather forecast to gauge how busy the day will be: The colder the temperatures, the longer the lines.

In 1976, long before the booming development of Sugar House, the Aitkens opened the no-frills, cozy restaurant—much unchanged today—to offer their favorite soup recipes to hungry customers seeking comfort food, something they felt was missing in the area.

The Aitkens were right, and the Soup Kitchen has enjoyed decades in business by offering fresh, made-from-scratch soups, friendly service and affordable meals. This recipe for success seemed simple enough, but it was also John’s early experiences in the food industry that defined the foundation of the restaurant.

Before ending up in Utah as a teenager following World War II, John grew up in a poor family in Glasgow, Scotland, where having food was a luxury. John remembers singing songs with his siblings in the war-torn Scottish streets in order to scrounge up enough money to buy milk and food. At that time, any food was a coveted commodity.

Several years later, John serendipitously served as a cook during the Korean War, after a tuberculosis diagnosis made him unable to serve in active duty. There, soup was commonly on the menu for the droves of soldiers he fed.

After returning from the war, he continued working in the food industry before finally opening the Soup Kitchen in 1976.

While the Aitkens had confidence in their business endeavor, it would have been difficult to predict the restaurant’s eventual growth to four locations across the Salt Lake Valley, and today’s necessity to make 40-45 gallons of each soup daily to keep up with demand during the busiest months.

Since the restaurant’s early days, the Soup Kitchen has expanded its menu beyond its brothy creations (and much-loved fresh, complimentary breadsticks) to include a range of salads, sandwiches and burgers. And while Mauro believes these additional offerings are certainly a contributing factor to the Soup Kitchen’s modern success, it’s equally important to stay true to the original principles his grandparents believed in, which, in large part, means “accommodating the people who have made us successful,” he says.

That includes long-time patrons, some of whom still come in daily, even on a hot afternoon, who don’t need to utter a word for the server for them to know what he or she would like to order. Those interactions make the Aitkens and the second- and third-generation family stewards most proud. It goes without saying that to step into the future, Soup Kitchen will always keep one foot firmly rooted in the past.