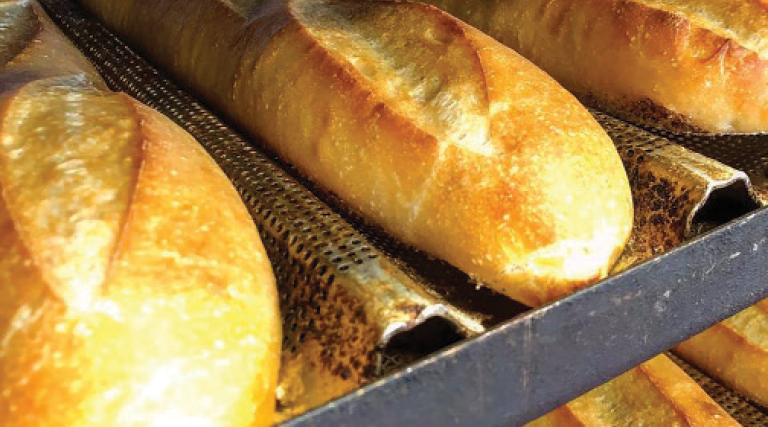 There’s no better time to partake in a bowl of steaming fragrant soup than during these cool, crisp autumn days. But we at Devour must interrupt your first slurp to ensure that you are appropriately prepared for your meal. Each soup, chowder or bisque requires the perfect doughy companion with which to dip, dunk and sop up every last bite. Simply put: Friends don’t let friends eat soup without bread.

Fortunately, there are two local grain giants that have perfected the art of breadmaking and are sharing their suggestions for soup and bread pairings. Stone Ground Bakery and Vosen’s Bread Paradise both have a head-spinning array of bread and baked goods—all freshly made each day. They are more than happy to guide you on your soup-and-bread matchmaking mission. (Hint: It is impossible to make a poor choice.)

Stone Ground’s prized creation is the tangy rustic sourdough filoni, made from a 35-year-

old sour starter (a replacement for yeast). It’s the same crispy crusted bread offered tableside at Market Street Grill locations where you’re likely to ask for more (and more). Consider also Stone Ground’s soup bowl, which is made similarly to the sourdough filoni (with less of the sour starter) and complements thicker soups and chowders.

d customers for its versatility. The rolls come in asiago, harvest grain or Tuscan styles and feature a chewy consistency with a caramelized crust. Just reheat them to achieve desired crispiness.

Vosen’s Bread Paradise
328 W. 200 South, SLC, 801-322-2424, Vosen.com
In 1997, master baker Markus Vosen put Vosen’s Bread Paradise on the map as the German bakery in Utah. Since taking over the business in 2004, David and Michelle Porter have continued to employ the artisan methods Vosen perfected, along with introducing David’s own culinary innovations: Nutella pastry and croi-liners, anyone? But first, consider these three options to accompany your soupy desires.

Bauernbrot
This robust and full-flavored German farmer bread is one of Vosen’s most popular classic bakery offerings. The white-rye flour combination makes it a versatile companion to many soups.
Pairs well with:
Broccoli cheddar soup
Cauliflower soup
German potato soup 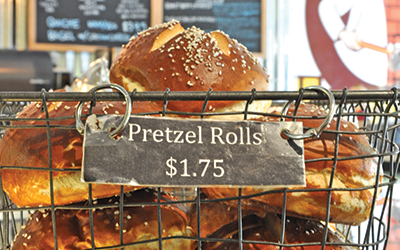 You can’t mention a German bakery without a pretzel-inspired creation. This pretzel roll has a crisp, salty crust and a soft interior. If you don’t accidently devour it on its own, it makes a perfect soup sidekick.
Pairs well with:
Beer and cheese soup
French onion soup
Lobster bisque