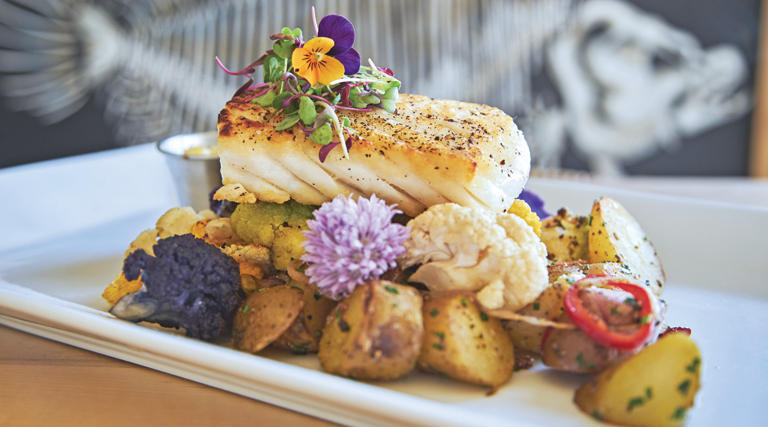 Journeying up Parleys Way, the anchor signage of Harbor Seafood & Steak Co. catches the eye—reminiscent of a seafood eatery along San Francisco’s Fisherman’s Wharf. But instead of overlooking Frisco bay, you’re greeted by majestic views of the Wasatch mountains—not a bad tradeoff.

When owners Randall Curtis and Taylor Jacobsen opened the doors to Harbor Seafood & Steak Co. in 2014, they hoped to connect with their Sugar House neighbors and rejuvenate the restaurant scene below Foothill Drive. Occupying the former Rino’s Italian Restaurant location, Harbor retained Rino’s basic structure but infused it with a clean, snappy interior. Instead of the old pink dining room, there are modern touches of white, wood and nautical motifs—what you’d expect with a seafood eatery. The eclectic music adds to the contemporary ambiance.

Upon entering, you’re greeted by a welcoming staff where you have a choice of eating inside on cushioned seating near a glass-enclosed kitchen or, in the summer, on the spacious vine-covered patio with a view of the valley. Twinkling lights strung end-to-end on the patio eaves offer a romantic atmosphere that’s second to none.

The ever-popular clam chowder ($7-$9) is a creamy blend of Maine clams, mirepoix and toasted radish accompanied by a sourdough roll.

The best way to order the entrées is to split them family style. The fresh Alaskan halibut ($41) is cast-iron seared and topped with roasted cauliflower and pistachios, pancetta, potatoes and pineapple-citrus chutney. Even with the plentiful accompaniments, the fish isn’t overpowered and is seared precisely—not too dry nor chewy.