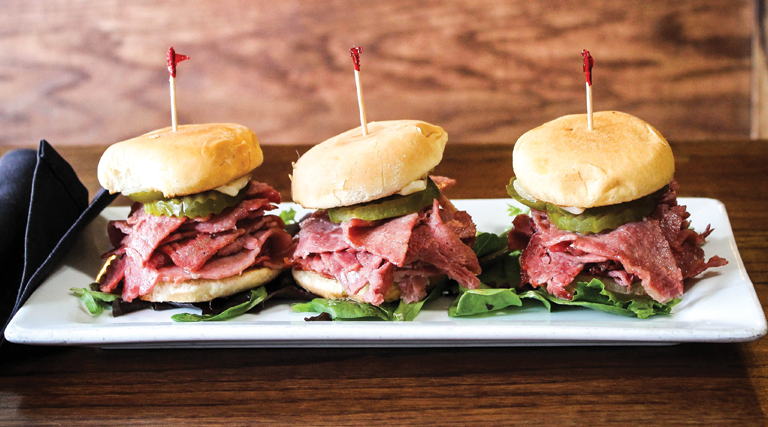 A bite of Blarney to fuel your jig

First things first: It’s either St. Patrick’s Day, or— shortened from the Gaelic name, Padraig—St. “Paddy’s” Day. “Patty” is a nickname for women named Patricia. Leprechauns are not cheerful pranksters—in Ireland they’re deceitful thieves and vicious troublemakers. And let’s not even mention widespread beer abuse that comes in the form of green dye.

Americans have been making up their own interpretations of what a St. Patrick’s Day celebration entails since the first frightened immigrants arrived from Eire. Emigrants fled Ireland’s devastating Potato Famine of 1845, when more than a million died of disease and starvation, while over the next decade, an estimated two million emigrated to other countries, many in “coffin ships” bound for the United States.

In Ireland, St. Patrick’s Day was traditionally observed as a Catholic saints’ day: Pubs and businesses were closed, and families spent time together in prayer.

Even the ubiquitous Irish-American meal of corned beef & cabbage is a New World invention. Through much of Irish history, only the wealthiest could afford beef, and Irish communities concentrated their resources on raising dairy cows (for making cheese and butter) as well as hogs and sheep. During English occupation, almost all Irish beef was slated for export, usually preserved through brining and a curing method called “corned” due to using large corn kernel-sized salt crystals.

In mid-19th century American cities, beef—especially the flavorful cheap cuts corned by Jewish kosher butchers—took the place of pork and lamb on the Irish-American table for special occasions. And St. Patrick’s Day became less of a religious holiday and more of a cultural-heritage celebration under the guise of honoring Ireland’s patron saint who drove snakes from the Emerald Isles.

Ever-present potatoes rounded out the revised interpretation of the meal, along with inexpensive cruciferous winter vegetables, especially cabbage. Within a generation, the triumvirate of corned beef, cabbage and potatoes had infiltrated ever-malleable American cultural identity; Abraham Lincoln even had it served at his inaugural luncheon on March 4, 1861.

Nowadays, on St. Patrick’s Day in cities like Dublin, it’s more than a little ironic to find pubs not only open but overflowing with American tourists ordering up heaping bowls of—you guessed it—corned beef & cabbage (alongside a perfectly poured pint of Guinness, of course). The savvy pub operators of Ireland know a marketing opportunity when they see one.

Here’s where you’ll find us feasting on Irish-inspired appetizers on March 17 and beyond. Just keep in mind the Irish draw the line at dyeing beer green—as should we all.

Corned Beef Sliders pictured above
Park City’s Old Town, especially Main Street, boasts a rich and colorful immigrant history. The building now home to Flanagan’s Irish Pub & Restaurant was constructed in 1902 to house Barton & Phillips Furniture Store and Funeral Parlor. Over the years, the site hosted the Elks Lodge and, in a sweeter turn of events, a confectionery. According to the current owners, their restaurant’s moniker honors Father E.J. Flanagan, a Catholic priest who raised funds for his orphanage (now known as Boys Town) with a nationwide traveling show featuring talented “orphan entertainer” musicians, singers and comedians with an annual Park City stop across the street at the Federal Bandstand. On the pub’s menu, you’ll find hearty “Irish Fayre” main courses like fish & chips, bangers & mash and shepherd’s pie. Those hoping for a smaller bite to share need look no further than the corned beef sliders ($12), three miniature buns stuffed with thin-sliced corned beef made in house, Swiss cheese and a zippy horseradish mayo. 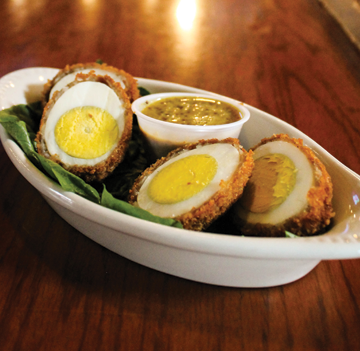 Scotch Egg
In much of the United States, St. Patrick’s Day parades have become a pan-Gaelic celebration, with Irish wolfhound clubs marching behind fleets of vintage British mini Coopers and MGs, all accompanied by Scottish kilt-clad pipe & drum corps. The multicultural approach is also the case for drinking establishments such as Piper Down Pub, a Salt Lake City institution founded in 2003. In addition to plentiful on-tap options like Irish Guinness and Strongbow hard cider, the pub has a decent selection of bottled beers and one of the best collections of Irish whiskey in town. They also serve a hearty small bite in the form of Scotch eggs ($9)—two hard-boiled eggs encased in pork sausage, rolled in breadcrumbs and then deep fried; served with a tangy Guinness mustard dipping sauce. It’s an almost-perfect hangover food. Of this snacks-menu item, Piper Down bartender Maureen “Mo” O’Donnell notes, “We go through a lot of them. They’re a great, high-protein quick bite.” 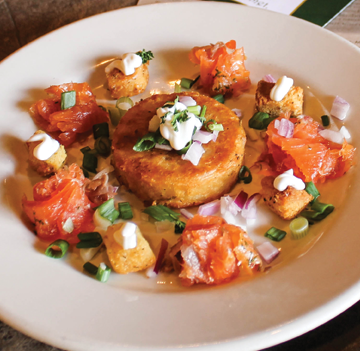 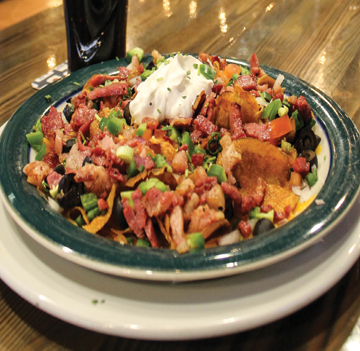 Irish Nachos
What’s more quintessentially American than mashing up two completely different cultural food concepts into one delicious dish? Behold: Irish nachos ($9.95), an appetizer found on almost every Irish pub menu in Utah, is crafted with pizazz at downtown Ogden’s Harp & Hound, which just celebrated its one-year anniversary in January. The generous helping of house-cured corned beef, jalapeños, sour cream and onions is piled high over a plate of just-fried potato crisps, of which bartender Kam Daniels says, “we make ’em fresh every day.” Joined with a pint of Guinness, it’s a meal on its own, with plenty to share. Co-owner Dave Morris (who also owns Piper Down) has assembled an extensive vegan menu that might not be Irish-inspired but provides patrons with plenty of vegan comfort-food options.