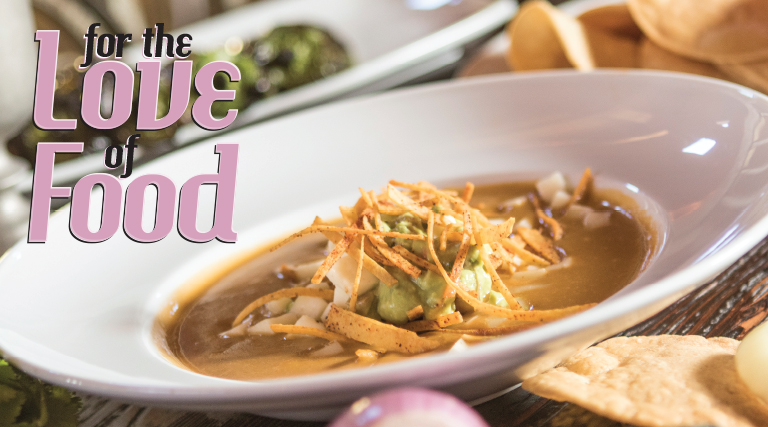 When you love what you do, it shows. It’s in every detail. Chef Arturo Flores of Park City’s Chimayo Restaurant is a shining example of someone who loves what they do, and you not only taste it in his dishes, but you feel it in his space. 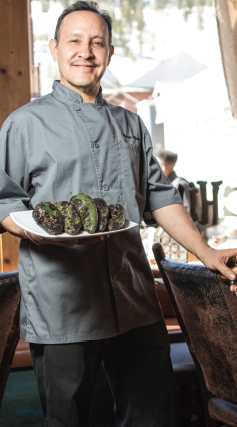 Flores grew up in Chihuahua, Mexico, and set out to be a tax attorney. Needing to earn money to further his education, he came to Utah in 1993 and starting working in Bill White’s Grappa Restaurant as a dishwasher. He quickly moved into making soups and sauces and being a food runner. After five years, Flores transferred to White’s Windy Ridge Café, dabbling in many things throughout that tenure, and learning all he could from his mentor, Bill White. In 1997, Flores became a food expeditor at Chimayo, and after just one year, he was offered the job as head chef. As they say, the rest is history.
Flores never returned to law, and only visits Mexico a few times a year to see family. Utah is home; Chimayo is where his heart is. “Arturo comes in every morning to make all the sauces himself, some of them take several days,” Chimayo restaurant manager Marylou Johnson says. “He looks at every dish before it leaves the kitchen. Detail and taste are very, very important to the chef.”
Flores finds inspiration for his foods in both the cuisines of southern Mexico and the southwest United States, but you won’t find a lot of beans and traditional cheeses on his menu. Using different types of chilies and spices are the foundations of a lot of his dishes. Flores changes up the menu every six months to keep things fresh and, on average, he serves 340 patrons each evening.
“For me, food is like art, like a picture, you add things, you take some ingredients away,” he says. “You work with the recipe until you have the flavors.” Flores comes from a long line of cooks, and grew up in the kitchen with his mother and his grandmother. You will find his grandmother’s homemade tortilla soup on the Chimayo menu, along with many other dishes inspired by his family. 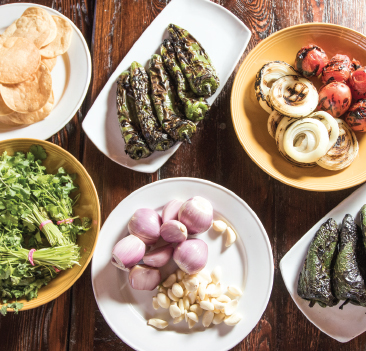 The Puerto Nuevo-style sea scallops are a popular menu choice and the crown roasts of barbecued spareribs take all day to prepare. The elk London broil, the buffalo Alambre and the duck enchiladas are unique dishes created with flavors particular to Flores’ wide-ranging culinary palate.
In addition to its cuisine, the Chimayo ambiance transports diners beyond Utah’s borders. Fashioned after the historic Spanish mission in Chimayo, New Mexico, the restaurant space is quaint and warmly welcoming. The booths have Southwestern-style pillows, the floor is lined with imported Mexican tile, and the magnificent twisted wood columns throughout are hand-carved and also from Mexico. It’s a place you want to linger and enjoy as many foods as you can eat.
When asked if he regrets not following his original path of being a lawyer, Flores says, “Not for a minute. What I do every day is from the heart. I really love what I do.”

Directions:
Grill jalapeño, Anaheim and poblano peppers to char the skins.
Place peppers in a container and cover with plastic wrap until the skins loosen.
Peel and seed the peppers and set them aside.
Oven-roast the tomatoes until the skins blister and loosen. Peel and set aside.
In a 10-quart stock pot, sauté onion and garlic until lightly browned.
Add peppers and tomatoes, sauté to blend flavors.
Add corn tortillas, cilantro and chicken stock. Bring to a slow boil.
Once boiling, carefully transfer to a blender (in batches, if necessary) and purée until well blended.
Return soup to pot, simmer to blend flavors, then strain.
Garnish with spiced tortilla strips, guacamole and Oaxaca cheese (can substitute mozzarella cheese).
*Arturo’s Secret Ingredient: A lotta love!

One thought on “For the Love of Food”