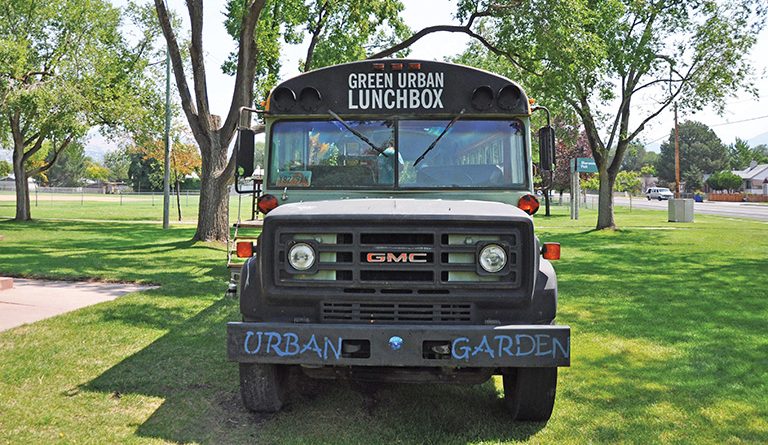 What’s more futuristic than thinking about how to make hospitality a more sustainable and environmentally friendly biz? Some sobering statistics on why we all might want to take a trip to the neighborhood bar a little more seriously: While U.S. recycling programs overall grew steadily since data was tallied in the 1960s, the volume of recycled goods has essentially leveled off since 2000. And, according to the EPA, glass (the biggest player on liquor store shelves) recycling has steadily declined since 1980.

To boot, the hospitality industry has recently turned a self-critical eye to reducing the amount of food waste that ends up in landfills: of the 63 million tons of food waste that Americans send to the trash each year, roughly 40% is generated by “front facing” businesses like bars, restaurants and hotels.

With these concerns in mind, the food and beverage industry has been rising to the challenge by reducing waste, recycling, and closing the waste loop. And we’re fortunate that many leaders in this charge for sustainability can be found right here in Utah, making future-forward choices an intrinsic part of their workflow, production and business models. Mighty good incentive to raise a glass in cheers, to be sure.

Getting to the Source

Reducing the carbon footprint of the food and beverage industry through conscientious, local ingredient sourcing has become a priority for many Utah businesses. Distilleries and breweries make buying local a priority, such as New World Distillery in Eden sourcing Utah cherries for their Wasatch Blossom Cherry Liqueur, and The Hive Winery’s lineup of Utah-sourced fruit wines and spirits. Local businesses also benefit from partnerships with local farms, orchards, and with organizations like Green Urban Lunchbox, a group that picks and distributes surplus from urban fruit trees that would otherwise go to waste. Thriving craft cocktail bitters companies Bitters Lab and Honest John Bitters Co. both source fruit from GULB for their artisan products. Says Honest John Bitters Co. owner Sara Lund, “We partnered [with GULB] last year to create several apricot-based products, including mixers like shrubs, a syrup and two kinds of bitters;” and for each bottle of apricot product sold, Honest John donates $1 back to the GULB FruitShare program.

On the production side of the environmental equation, other businesses have committed to supporting Utah beekeepers. Sometimes, that means making the footprint seriously localized, as in the case of the Takashi and Post Office Place bar programs, which use honey sourced from their own rooftop beehives. But one of the most significant steps all of these programs have made is to recognize the balance between consumer aesthetics and accountability. Says Willis, “Since bars normally juice produce, we have flexibility with how produce looks.” Which means that bars are the perfect purchasers for ugly fruit and veggies. “Dented peach? Who cares if you’re just going to pulverize it?” she says. “Brown on a lime? Doesn’t matter if you’re only using the inside.”

AC Hotel bar manager (and Utah Bartenders’ Guild officer) Tracy Gomez notes that the hospitality industry is super-aware of the environmental and community costs of food waste. Her observations: “There’s a general trend away from ginormous plates of food in favor of small or shared plates,” and drinks and plate garnishes are moving away from big, gratuitous (and often inedible) gimmicks.

Quarters bar co-owner Katy Willis notes that it’s sometimes the small things that can really add up to the tally of waste. “We don’t burn [throw out] ice at the end of the night,” she says. “Our unused ice goes into the wells that hold juices and melts over time. Burning ice is a waste of water.”
There’s also a glimmering community of sustainability-driven camaraderie in their network of Main Street-adjacent bars. “We have trash, glass recycling, regular recycling—and we compost our food waste from prep,” says Willis. “Alibi does all these same things as we share trashcans!”

Just up Main Street, bars Bodega and The Rest have set up similar protocols. Says owner Sara Lund, “We recycle all of our glass and food waste with Momentum Recycling,” as part of their workflow practice. Willis also notes that many bars in SLC—including Bar X and Alibi—have cut way back in the amount of plastic wrap used (at Quarters, they’ve eliminated it entirely) by using stretchy silicone lids for garnishes, and silicone wine toppers for juices. “They work great, are less messy and end up costing about the same as plastic wrap,” she notes. Her suggestion inspired me to look into similar products for my home food storage practices.

It’s also been a bit of a trial-and-error experiment for many bars to figure out a non-plastic straw solution that works equally well for the environment and the customer experience. “We have tried all the straws,” says Willis, echoing a lament that I’ve heard all over the industry in the past couple of years of working toward a plastic straw ban.

For the moment, Willis says, “We have settled on switching to hay straws, which can be composted. The same as everyone else—we only give straws when asked. It’s kind of wild the reduction in waste this simple thing can do.”

Lund says her bars took a similar stand: “We eliminated the use of all plastic straws and cocktail picks in the building and only use reusable stainless steel straws, or straws and picks made from natural and biodegradable materials,” like paper, bamboo, wood, hay, etc.”

Some of the most exciting practices in the distilling industry aren’t even futuristic ideals. They’re holistic approaches that harken back to the earliest days of the craft, when community distillers were intrinsically rooted in local agricultural cycles of growth, abundance and returning nutrients back to the land. In keeping with non-pesticide-based integrated pest-control practices, distilleries all over the world have long relied upon feline companions to police grain-filled warehouses for vermin. At Beehive Distilling’s sparkling modern distillery on West Temple in South Salt Lake, their shop cat, Gimlet, graces the space with charm and character (though her mousing skills have yet to be proven, which I speculate is more due to the distillery’s cleaning vigilance than her lack of ambition).

Says lead distiller Chris Barlow, “We’ve partnered with Best Friends Animal Society for a fundraiser, so adopting Gimlet from them seemed like a natural fit.” The lithe tuxedo kitty has pride of place in the warehouse—which is separated from the public bar for food safety reasons—and she has a pretty cushy sleeping situation in a bed made from a reclaimed whiskey barrel.

Going back to the point of production, more distilleries are following in the ancient footsteps of their savvy craft distilling forebearers to close the waste loop. In addition to sourcing grain within 100 miles of their West Temple shop, Sugar House Distillery has integrated a mash upcycling program. “If we put it down the drain, it is a huge cost for the water departments to clean it up,” says founder James Fowler. Instead, SHD looked into completing the agricultural cycle. “We sent off samples to Utah State University for testing,” he says of the spent alcohol-free mash, “and it actually has more nutritional value after we have mashed and distilled it,” making it a near-perfect feed for livestock. Farmers pick up the feed mash by the truckload from the distillery a few times a month. “It is really hard for us to collect and do it (right), but it is the best thing for the environment,” Fowler says.

Quarters Bar’s Willis notes that sustainability is more than a buzzword in the industry: “A cool thing about sustainability efforts is that it can often lead to financial efficiency, which saves a business money,” a choice she identifies as an opportunity to give employees more beneficial labor hours, which can be offset by reducing food costs. “I ultimately save money, help the environment in a small way, and I have created a new part-time job!” She, and we, declare it a win-win-win trifecta of change.