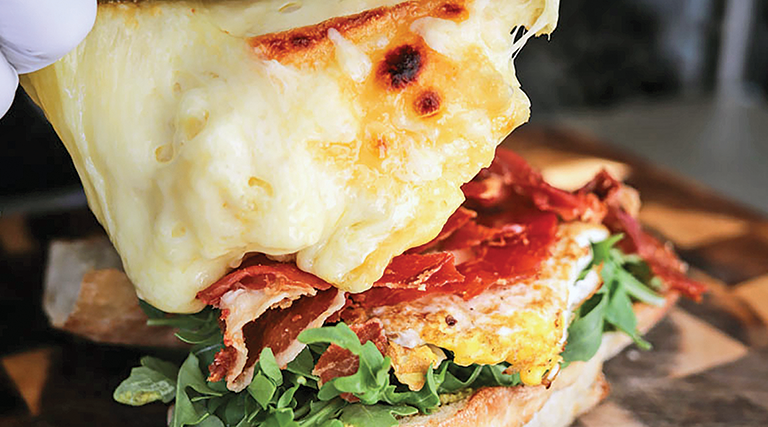 It’s not exactly gilding the lily to melt cheese atop a sandwich, corn chips or vegetables. Cheese just makes food taste better, giving it a rich craveable flavor. While the idea of melting cheese on food has been around for centuries, we can’t help but notice a hot-melt renaissance going on right now, and we just had to dip our toast into it. Check out these dishes from Utah eateries that take full advantage of cheese’s gooey goodness.

The Breakfast Sando
Partners Abby Pfunder and Zara Ahmed began their love of all things cheesy having first met working at California’s famed Cowgirl Creamery. They decided to share that love by bringing raclette, the classic alpine European comfort dish, out of the ski lodge and on to the streets with their Raclette Machine food truck. To prepare the lavish melt, half a wheel of cheese, typically Gruyère, is heated until soft and runny then scraped onto a plate of potatoes, pickles (cornichons) and bread. The Raclette Machine offers that classic preparation as well as other takes such as the Breakfast Sando featuring Crumb Brothers bread, poblano chile pesto, a fried egg and greens along with thin slices of prosciutto (optional), all of which is blanketed with a warm scrape of Wasatch Mountain cheese from Rockhill Creamery in Cache Valley where Pfunder did a cheese-making apprenticeship years ago. Raclette Machine even offers vegan versions of their menu items. (Brian Fryer)

The Gouda 4 You
While their Praise Cheezus booth at the Park Silly market (and now a food truck) in Park City along with menu items named Sweet Baby Cheezus and the Bethle-Ham sandwich might get a laugh, don’t think Josh Pruitt and his partner, Jessica Lanoue, aren’t serious about good, gooey melted-cheese specialties. For nearly five years, the couple has been offering “grown up” grilled cheese at events in the resort town and have equipped a few bars in town with sandwich presses and pre-made sandwiches to offer hungry patrons. “We use good quality ingredients and offer it at lower prices than you might usually see in Park City,” Pruitt says. “We love coming up with the combinations, and we won’t serve anything we wouldn’t like ourselves.” With food trucks recently permitted in the Park City area, the couple will be hitting the road offering items like the Gouda 4 You featuring caramelized onions, whiskey maple bacon, Dijon aioli and, of course, melted Gouda. (Brian Fryer)

Inside Out Grilled Cheese
Cache Valley may have a long cheese tradition, but the folks at Herm’s Inn at the mouth of Logan Canyon in a charming, restored early-1900s gas station have turned tradition around with their take on grilled cheese. It starts with melting shredded cheddar-jack on a hot griddle until golden and crisp. A slice of bread is placed on top of the pile and then is flipped onto a second pile of melting cheese. The reverse grilled cheese is topped with black beans, guacamole and a choice of grilled chicken, steak or ham. Herm’s was once the last chance for gas before entering Logan Canyon, and it may be the only place to find this … um … sandwich? Open Monday-Sunday, 7 a.m.- 1:50 p.m. (Brian Fryer)

Toffee-Crunch Cheesecake
Why settle for cheesecake from a factory when there are locally made, decadently rich ones made with love by Mary Gostis and her reggae music loving son, Justin, and in almost limitless variety. The former owner of Dough Boys in Sandy opened 1 Luv commercial bakery about nine years ago providing desserts for local restaurants like Tsunami. 1 Luv makes about 80 different varieties of cheesecake in 10-inch rounds or in individual cupcake-size cheesecake cups. They even have gluten free crusts. “Our most popular are toffee crunch, raspberry with white chocolate and the lemon raspberry,” Mary says. Orders can be placed by phone or online. (Brian Fryer)

St. Alfonzo’s Pancake Breakfast
The name of this menu item (a curious shout-out to a Frank Zappa song from the ’70s? Look it up kids) is not the only unusual thing about this classic breakfast plate served at a cozy café high on the mountain in Draper’s Suncrest neighborhood.

Looking to add more gluten-free items to the menu, the chefs at the Ridge Café mixed in ricotta cheese to liven up pancakes made with gluten-free flour.

Three of the light, fluffy ricotta pancakes are complemented by sausage patties (or bacon) and two eggs to make an altogether perfect brunch choice but would probably still be too normal for Mr. Zappa. (Brian Fryer)

Four Cheese Classic
It is all about the cheese, so why not add more? Melty Way has been perfecting its grilling techniques since starting with a food truck in 2012. The Four Cheese Classic piles on sharp provolone, fontina, havarti and sharp cheddar. Cheese-laden bread slices are sent open face through a conveyor toaster to create a sandwich that’s melted cheese on the inside, and toasted on the outside.

“We tried a couple different methods, and we didn’t like the results until we started doing things this way,” says founder David Nibley (who some will recognize from his roles in Latter Day Saints-themed films). “We make a great tomato basil soup that is just perfect with the Four Cheese.”

Toasted Brie sandwich
Joel and Jill LaSalle took over The Oasis Café from original owners Jackie Pratt and Steve Paul in 2002, and the toasted brie sandwich ($10) on the lunch/brunch menu came along with the deal. When asked about the staying power of the sandwich as a regular offering and customer favorite, general manager Will Keesen says, “There are some things you just don’t mess with. From the velvety creaminess of the melted brie cheese, surrounded by the satisfying crunch of the toasted cranberry walnut bread–it’s perfection. Pairing it with the tang of citrus jicama salad, and your mouth fires on all cylinders. We wish we would have thought of it.” Nearly two decades later, this sandwich is still a gastronomic delight like no other in the city. (Heather L. King)

Pour Me A Slice
Brother-in-laws Tim Welsh and Pat Ford opened the Beehive Cheese creamery in 2005 with just eight days of cheese-making experience between them. They created Beehive’s Promontory Cheddar—which serves as the base cheese for all of their flavored cheddars—and then began experimenting. They rubbed coffee and lavender on the cheese, and today, the immensely popular and award-winning Barely Buzzed is known the world over. They continue to make “whey” in the cheese world with conventional and unconventional external cheese rubs—most recently infusing Promontory with Basil Hayden’s Kentucky straight bourbon whiskey to create Pour Me A Slice. The sweet and creamy aged cheddar offers up a subtle hint of bourbon spice. (Heather L. King)
Beehive Cheese
2440 E. 6600 South, Suite 8, Uintah
801-476-0900
BeehiveCheese.com

Three-Cheese Fondue
Cozy up by the fire at Franck’s and get ready to enjoy the atmosphere as your order of three cheese fondue (single portion $19, double $25) arrives at the table. The first bite belies the beauty of Franck’s fondue—in its simplicity and dependence on quality ingredients, of which there are only four, gustatory excellence is achieved. Melted Gruyère, Emmental and Swiss cheeses are the primary delicious elements with a splash of Kirsch liquor for a hint of sweetness. Dunk chewy chunks of crusty bread into your warm pot of cheese to make this winter season unforgettable. (Heather L. King)

Baked Brie
Kimi Eklund has provided Utahns with a taste of European cuisine for two decades. Most recently, Kimi’s Chop & Oyster House in Sugar House introduces Salt Lake diners to Kimistyle tapas, like the rich and easily shareable baked brie ($14.50). The dish brings together Alpine favorites of warm and melted French brie wrapped in pastry dough paired with a refreshing apple slaw, tangy citrus-tossed arugula and a flourish of cloudberry coulis for a spicy, fruity finish. The baked brie is a great start to a filling wintertime dinner or as a post-work drinks and appetizers option. (Heather L. King)

Mozzarella Eggplant Parmigiana Bowl
Chef Carmine Delli Bovi set out on a mission three years ago to redefine Italian cuisine. A native of Naples, Italy, Delli Bovi grew up on fresh-made pasta, seafood and cheeses. When he couldn’t find the local, fresh ingredients he grew up on, he and his staff creating some of their own. Today, Carmine’s most exquisite dishes include their mozzarella, burrata and ricotta, made in-house. Carmine’s Mozzarella Eggplant Parmigiana Bowl is a softball of warm, pillowy mozzarella stuffed with their signature eggplant parmigiana topped with fragrant basil. This vegetarian, gluten-free dish originating in southern Italy is a sight to behold and a joy for cheese-lovers to consume. (Mika Lee & Cait Lee)

Atomic Meatball with Feta
Moochie’s has made a name for itself with their authentic Philly cheesesteaks and meatball subs. Owner and Philadelphia native Joanna Rendi was raised on the finest steak sandwiches when they began to add American and provolone cheese back in the ’50s. Since then, she’s been no stranger to good quality cheese, perfecting meat-to-cheese ratios to bring Utahns just the right amount of saltiness and creaminess in each bite. “Food is just a vessel for the cheese,” Rendi jokes. “We put cheese on just about everything.”

Moochie’s cheesesteaks may have a reputation of their own, but Rendi’s choice sandwich is the fiery Atomic Meatball with Feta Cheese, a rich, crumbly cheese atop meatballs in a spicy marinara slathered over a fresh-baked hoagie. Drizzle it with creamy jalapeno sauce made in-house and order a side of squeaky cheese curds, a new menu item, for cheesy bliss.