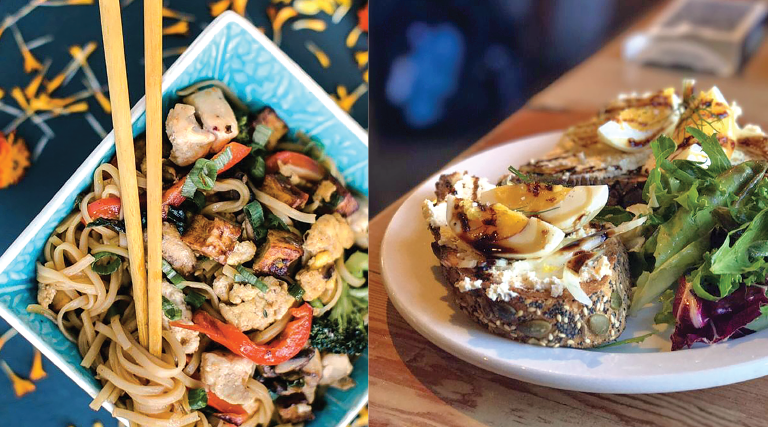 After decades of being equated to rabbit food and the cuisine of “hippies,” health food has at last gone mainstream. In today’s food world, you don’t have to search out a specialty grocer to buy sugar-free granola or barley in bulk, and the phrase “kale yeah!” can be found everywhere from T-shirts to totes. More and more plant-forward eateries are cropping up with a focus on nutritious meals not flavored with copious amounts of butter. (Writer’s note: Butter is a beautiful thing but, you know, everything in moderation.)

Without compromising taste, a trio of Salt Lake establishments is cranking out delicious, nutritious food using techniques and ingredients that just might inspire and transform your own cooking at home.

BYOB
In a post-goop society, BYOB no longer solely means to come bearing booze. At Pulp Lifestyle Kitchen (multiple locations, PulpLifestyleKitchen.com), it most certainly is all about Building Your Own Bowl (or wrap, or salad—for that matter). Over a decade ago, Pulp founder Thomas Kreitlow was 70 pounds heavier and not exercising or paying attention to what he was eating.

“Over the course of a year, I started eating healthy, cooking my own food and working out, and I lost the weight,” says Kreitlow. “I realized there really was something to this idea that what you put in your body is the driver for your wellness—not only your physical health but your emotional health. That’s how Pulp started.”

In 2013, Pulp opened as a small juice and smoothie bar in the gym at City Creek. Today, there are three Pulp Lifestyle Kitchens (downtown, Liberty Park and in Sandy) plus a smaller Pulp Express in Park City.

Kreitlow, with a background as a chef and economist, says all their bowls are healthy, but each has a different flavor profile, base and protein. “So, we create the framework for the customer, but the customer has some input on what they choose to create,” he says. “We wanted to make the menu interactive.”

Layer, Flavors and Textures
The Rose Establishment (235 S. 400 West, SLC, 801-208-5569, TheRoseEstb.com), a brunch and lunch coffee shop in a beautifully restored former meatpacking factory produces plant-forward food with an eye for aesthetics and a knack for combining unusual but complementary ingredients.

While some might think that healthy dishes tend to be bland and flavorless, chef Chandler Bailey would beg to differ. “I like bold, flavorful food with a lot of color and depth to it,” he says, noting he cooks mostly with vegetables.

Bailey adds texture and flavor to dishes with toppings like charred leeks, fermented-blackberry pickled eggs and pomegranate arils, which you will find on The Weekender, a loaded five-seed toast with a base of “parsnip butter” made with pureed parsnips and another ingredient that can be found throughout The Rose menu: cocktail bitters.

From the well-known Peychaud’s bitters to the Salt Lake City-made bay leaf bitters from Crybaby Bitters, the secret ingredient imparts a serious flavor punch to dishes.

Cody Kirkland, former manager at The Rose and now proprietor of Crybaby Bitters, is to thank for taking the concentrated flavor from the cocktail glass to the plate.

Every dish at The Rose marries healthy ingredients with a touch of indulgence. Avocado toast gets an upgrade with roasted radicchio, black truffle potato chips, grated pecorino, pea shoots and fleur de sel. Gluten-free pastries are topped with edible flowers.

“Don’t be afraid to play around with a lot of ingredients and layer flavors,” says Bailey. “But I always make sure it’s never too savory, never too sweet, never too acidic. It needs to be balanced.”

Real Food
With a combined 40 years in the restaurant industry, owners and partners Wendy Phelps and Bill Peterson opened Roots Café (3474 S. 2300 East, SLC, 801-277-6499, RootsCafeSLC.com/ ), a small coffee shop and cafe with the mission to provide patrons with their version of healthy eating: real whole foods, humanely raised meat and vegetarian spins on classic dishes. “We started with a one-page menu, and over the years, it has grown to six,” Phelps says. With Peterson in the kitchen, the two developed a menu that balances meat entrees with veggie options.

“One of the things I didn’t like about going out to eat as a vegetarian is your options were a veggie burger—boring!—or a salad. Pretty basic food you can make at home,” Phelps says. “We wanted to create some things that vegetarians don’t ever get to see, like chili verde, which usually has pork.”

While the menu has classic dishes like shepherd’s pie, organic chicken piccata and a grass-fed beef sandwich with au jus, you will find the same dishes reimagined for vegetarians with portobello mushrooms, squash and more.

“We wanted to open a restaurant that isn’t straight veggie or necessarily all healthy, but you’re eating real food, often from farms nearby,” Phelps says. “We want people to know where their food is coming from.”

So, if you’re going to eat fatty foods, she says, know that the meats and cheeses they use are well-sourced and less processed. Plus, she says, all their foods are cooked in either organic extra virgin olive oil or clarified butter made in-house.