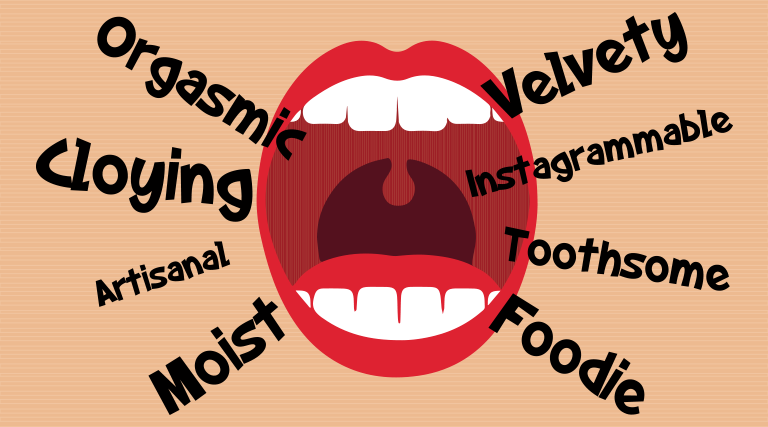 Searching for tongue buzz in a sea of food clichés

A latent, nerdish impulse is quickened in me when the subject is—to quote Hamlet—“words, words, words.” I like ’em, I really do!

I’ve been known to browse a dictionary. I pore over each year’s crop of coinages to find the likes of “locavore,” a 2007 word of the year, and “foodie,” a noun born in New York Magazine almost 40 years ago. Tracing the etymology of such idioms as “eat your words” has distracted me from household chores. What I most like, however, is words fitted together with the lapidary skill of the likes of Don Delillo, Vladimir Nabokov and John McPhee. Writers of lesser ability—me, for instance—often come up short. Sometimes we fail to get the right words in the right order. Other times, we regress to the formulaic. (By that I mean plodding, linear constructs like the five-paragraph “process” essay in high school English.) When is the last time you read a restaurant review that didn’t lead with appetizers and conclude with dessert?

Such structural challenges aside, those of us in the food-journalism dodge deal with abstractions—textures, flavors and aromas—and the need to bring them to life in the minds of readers. This is so difficult, writes New York Times wine critic Eric Asimov, there is a tendency to develop a descriptive vocabulary that may not be understood by the reader. He cites “minerality” as an example. For Asimov, “minerality is a highly useful general term that helps to convey the character of wines, which can seem stony, pebbly or rocky.” For me, minerality justifies one more glass of calcium-enriched cabernet.

In the writers’ tool kit, nouns like minerality are outnumbered by modifiers, 20 to one. That despite Stephen King’s insistence that the road to hell is paved with adverbs and the fact that adjectives are the furry lumps of roadkill along the way—many of which have been run into the ground by food writers. On the RIP list are: orgasmic, cloying, toothsome, velvety, artisanal, moist and Instagrammable.

Verbs and figures of speech have longer life expectancies. The pairing of an onomatopoetic verb and a simile in the New York Times described a parfait that “nearly buzzes on the tongue—like the exhilarating miracle of swallowing a bee before it has a chance to sting you.” It is good writing. It is also an object lesson at a time when plant-based meat substitutes are gaining market share. Food writers will have to do better than “tastes like beef” if they hope to appeal to the nerdish bent of climate-activists who believe meatlessness is a smart way to alleviate global warming.

“Better for you, better for the environment” is New Wave Foods’ slogan for its plant-based shrimp that “tastes like the real thing.” No tongue buzz in those words, and therein lies the challenge food writers face. They will have to retool—find new words—just as political journalists have done to report on the Trump phenomenon. Failing that, the words will be so “weary, stale, flat and unprofitable,” that both reader and writer will be left as melancholic as Hamlet.