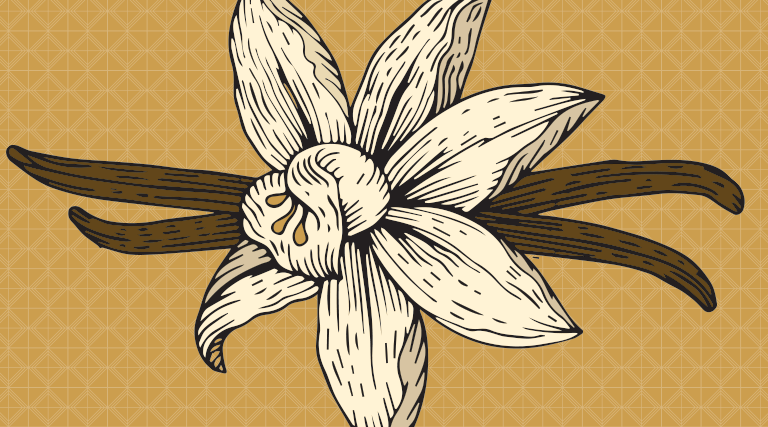 The role of vanilla as an ingredient is not unlike the role of the dowager countess Violet Crawley (played by Maggie Smith) in Downton Abbey: She’s elegant, refined, tasteful, commanding of respect and essential. She can hold her own or serve as the unifying factor under sweet or savory circumstances.

Vanilla was at one time considered an aphrodisiac and its complex fragrance conjures visions of lush exotic lands that are home to other spice such as cinnamon, nutmeg and cloves. 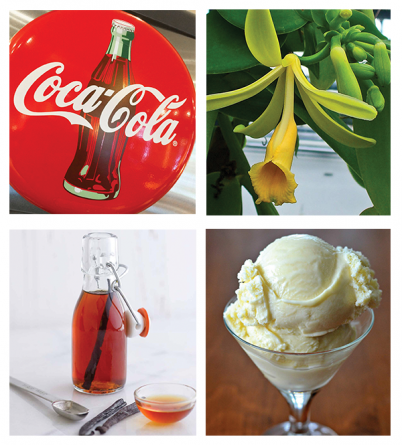 Vanilla planifolia is an orchid vine that when mature, at 3 to 5 years old, blooms for only a day during which time it must be pollinated by hand in the morning if it is to produce fruit, after which you’ll see long, bean-like pods growing. If temperatures and humidity are just right, the green pods will be ready to be picked five months later. Then they’re doused in boiling water, wrapped in blankets, moved in and out of the sun to avoid mold and massaged by workers to maintain moisture consistency. Finally, months later, they’re dark and fragrant with the sheen of essential oils, ready for export.

All this labor and time result in a high price, second only to saffron in the spice world. Prices have fluctuated greatly since the 1970s due to typhoons wiping out crops. Currently, the cost of vanilla is about 10 times what it used to be. In 2018, there was a shortage of Madagascar’s Bourbon Vanilla, which supplies about 80% of the world’s total. East Africa, India, Polynesia and Mexico also grow and export it. The yields in 2019 have been adequate.

Ice cream had something to do with its rise in popularity in the U.S. It’s believed that Thomas Jefferson tasted vanilla ice cream during his time in Paris (from 1784 to 1789), and upon returning to the U.S., vanilla ice cream was served in his kitchens for the rest of his life. The recipe he used is now in the Library of Congress.

In 1886, vanilla was an ingredient in John S. Pemberton’s launch of an “esteemed Brain tonic and Intellectual beverage,” Coca-Cola.

Vanillin is one of the major constituents that gives the spice its flavor. Vanillin can be synthesized, artificially, from wood pulp. Artificial vanilla is made with vanillin and is inexpensive. Look for Pure Vanilla Extract and read all labels to make sure you’re getting the real deal. A little sugar added to the alcohol extract is fine, but be sure there is no corn syrup or caramel coloring.

Blue Cattle Truck Trading Co. in Springville, imports Mexican vanilla from the Canosa family’s vanilla plantation near Veracruz, Mexico. The company is the exclusive distributor of the award-winning, private reserve of traditional Mexican vanilla extract (VanillaImports.com). Their product line includes pure and traditional extracts, beans, paste and mixes. The primary difference between the traditional and pure products is the amount of alcohol in the vanilla. Look for their attractive displays in stores or order online.

Vanilla is essential. Ingredients gather round it and are the better for it. Like the dowager countess, it enriches and unites.

For a quality vanilla, consider making your own. Slice 7 vanilla beans longwise and place in an 8-ounce jar. Cover with 1 cup vodka, bourbon, rum or brandy. Let sit for 8 weeks. Shake occasionally. It will be greatly appreciated as a gift any time of year.