Punch + a from-scratch menu with a maverick streak + Victorian industrial mountain lodge feel + locally inspired design + games. That’s the genius formula behind Punch Bowl Social. Since it served its first ladle of punch in Denver seven years ago, the concept has spread rapidly across the country, and as of September, its 19th location is in Salt Lake City. 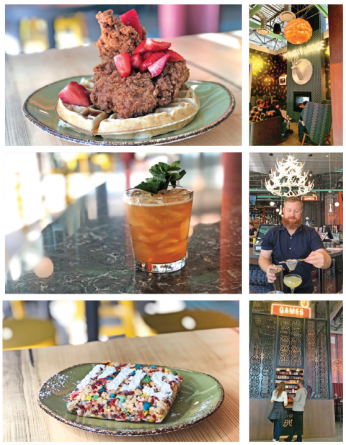 Located on the second floor of The Gateway, the Utah Punch Bowl Social takes interior design cues from the 2002 Olympics. Founder Robert Thompson took the ambience in an Olympic Greek direction, with lightning bolts, Grecian busts and celestial patterns.

Another more obscure source of local inspiration? Floyd, a flamingo that escaped from Tracy Aviary and took up residence at the Great Salt Lake. Pink Floyd, the bird and the band, inspire the décor in the private, Korean-style karaoke room.

A private room where you can belt out “Another Brick in the Wall” is just one of many themed spaces to explore. A fireside lounge here, a hall for flinging darts there. Duck into an ’80s arcade with a galactic ceiling, then vie for a strike in the bowling lane.

Wherever you land at Punch Bowl, come thirsty. Though Punch Bowl is oriented around the fruity party drink, Utah prohibits serving an actual bowl of punch—a hurdle that Patrick Williams, Punch Bowl’s national beverage director, describes as “a new challenge for us.” The workaround? Cocktails built with the principles of punch. Take the Lost Barrel Expedition, juiced up with Teakoe Pineapple Tea, spiked with two styles of rum and brought to life with cardamom syrup, lime and Angostura bitters. A huddle of mocktails made with nonalcoholic spirits, tonics and clever flavoring deserve the attention of the thirsty, as do the shakes and malts.

But before you order a sweet treat, don’t skip the main meal, which dabbles in everything from reinvented diner classics and Southwestern dishes to Mediterranean flavors. Chinese takeout fiends will love the Crab Cheese Rangoon Dip, served with housemade wonton chips and nostalgic packets of hot mustard and duck sauce.

A whimsical dip, dinner, dessert, a round of foosball, punchy cocktails—every part of the Punch Bowl equation is strong, but the sum of its parts is truly Herculean.