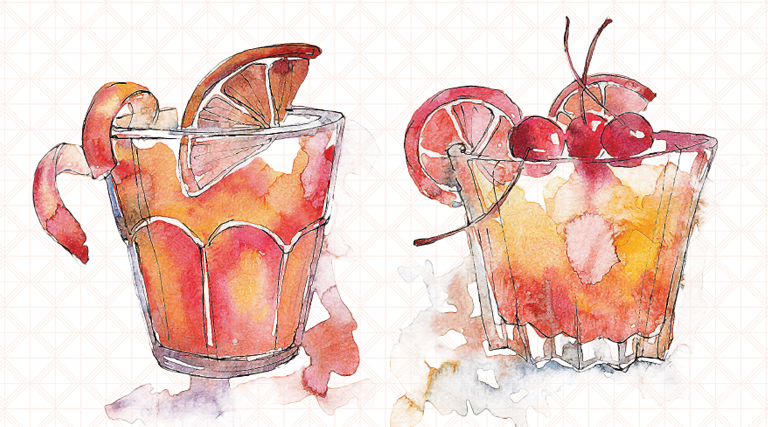 And now, for a punchy ending

Some punches pack a punch. Some don’t. Those that do have tended to rely on rum for clout. It has been that way since the heyday of the British Empire centuries ago.

“Punch” derives from a Sanskrit word meaning “five.” It refers to the drink’s five ingredients—sour, sweet, strong, weak and spice. In the 1600s the “strong” foundation of punch was either wine, brandy or arrack. After 1655, the developing West Indies rum trade made rum-based punch a staple in Boston and London taverns. Barbados Rum Punch evokes those days. It is made by following an oft-repeated ditty: “One of sour, two of sweet, three of strong and four of weak—dash of bitters, spice and ice.” In other words, one part lime juice, two parts sweetener, three parts rum, four parts water, then nutmeg and ice.

In colonial Philadelphia, around 1750, a social club called the Schuylkill Fishing Company was known for its Fish House Punch. Served cold in summer, hot in winter, it was a potent mix of black tea and rum—four cups each—two cups of cognac, a half-cup of peach brandy, one cup of lemon juice and one of sugar. The effect of a few punches, I imagine, was to disabuse club members from fishing.

Rum punch never caught on in Mormon territory. Even Utah’s accomplished man of letters, non-Mormon Bernard DeVoto, disliked it for his own reasons. In his 1948, book-length “cocktail manifesto,” The Hour, he wrote that rum “is drunk as all sweet liquors are, in a regressive fantasy, a sad hope of regaining childhood’s joy at the soda fountain.”

Nostalgia for Cherry Coke days at VaLora’s notwithstanding, plenty of Utahns love punch—so long as it is alcohol-free. No Relief Society recipe book wants for punch recipes. Mormon hostesses love punch because it is sugary, eye-catching and passably chic. Moreover, punch solves one quandary of holiday entertaining: Anchor the hors-d’oeuvre table with a pitcher of Kool-Aid? Liters of Shasta? Grandma’s cut glass punch bowl brimming with “Mormon Champagne”?

I found this recipe for Mormon Champagne in the 1992 edition of the Grant Fifth Ward Relief Society Cookbook: For a “great punch for church parties,” mix 10 pounds of sugar, 3 ounces of citric acid, 3 large cans of pineapple juice, 24 ounces of orange juice concentrate, and about 7 gallons of water in a 10-gallon container. Float 5 pounds of dry ice in the punch a half-hour before serving.

Dry ice adds pizzazz to a punch bowl of any size. Berries add color as do floating disks of orange or lemon. Ginger ale adds fizz; dollops of sherbet, texture. A pint of Everclear in a prankster’s pocket sets the stage for Shakespearean comedy.

DeVoto’s other objection to punch is that it is miserly by nature. The remedy, he wrote: “If you can’t serve good liquor to a lot of people, serve good liquor to a few.” For non-drinkers that means deconstructing the punch paradigm. Globalization offers the stuff that dreams are made of—lychee, calamansi, lucuma, acai, jamun, passion fruit. So, crank up the dream machine! Amazon.com will deliver exotic fruit and edible flowers. Red Bull will deliver the punch.