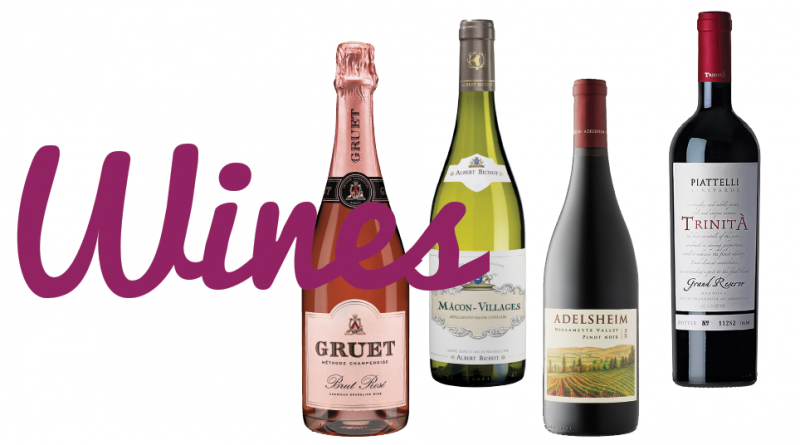 Thanksgiving dinner is the beverage equivalent of the seemingly insurmountable American Ninja Warrior course, in my humble opinion. There’s the abundance of foods from savory to sweet. The overall heaviness of traditional offerings. And, of course, a house full of personal opinions and preferences that only get more decisive (but hopefully less divisive?) with every bottle consumed.

To find a happy medium of spirits, I called upon an expert: Tracey Thompson, CEO and president of Vine Lore Wine & Spirits. For keeping everyone at the table happy, she suggested a white, two reds and of course, a celebratory bubbly. As far as I’m concerned, the best part of cleaning up after the big meal is making sure that the only thing that doesn’t get put away as leftovers is the wine.

Think Pink!
Sparkling
Gruet Brut Rosé, America NV ($18.99)
Says Thompson, “I adore everything about this wine: bubbles, rosé and Méthode Traditionelle.” Coming from some of the highest elevation vineyards in the United States (at 4,300 ft. above sea level), Thompson praises this naturally garnet-hued bubbly for hitting all the marks. “So versatile. This wine can carry you through the meal form start to finish.”

French Floral
White
Albert Bichot Maçon Villages, Burgundy 2017 ($15.99)
“From the southern end of Burgundy in the Mâconnais, this 100% chardonnay is crafted as only the French know how to do it!” says Thompson. “Gorgeous floral notes of acacia and honeysuckle with lovely mineral backbone.”

Oregon Berry
Reds
Adelsheim Pinot Noir, Willamette Valley, 2016 ($29.99)
“This is one of the pioneering winemaking families in the Willamette Valley,” says Thompson of this crowd favorite for our Devour potluck. “[They’re] leaders in environmental stewardship, family owned and operated, with over 237 estate vineyards.” The vibrant and elegant pour has notes of cocoa, pomegranate, raspberry and allspice. “If this doesn’t say Thanksgiving wine, nothing does,” declares Thompson. It’s widely available in Utah and on sale in November for $5 off at $24.99!

Argentine Plum
Piattelli Trinità, Mendoza, Argentina ($24.99)
A Malbec-Cabernet Sauvignon-Merlot blend, this is a powerhouse of a wine, rich with dark plum, raspberry and even dark chocolate. Thompson’s pick is made by one of the very few female winemakers in Argentina, fourth generation vintner Valeria Antolin. Thompson describes Antolin as the ‘heart’ of Piattelli. “Having been with Piattelli from its birth, she treats every grape as though it were one of her (adorable) boys. Daughter to a famous Mendozan winemaker, and with a degree in agronomy from Universidad Nacional de Cuyo, her passion leads Piattelli into the future of winemaking.” The 30- to 70-year-old vines located in the prestigious Luján de Cuyo (DOC) & Uco Valley yield an average of only 3.8 pounds of fruit per vine and 3.1 tons per acre. A celebratory grape, indeed.