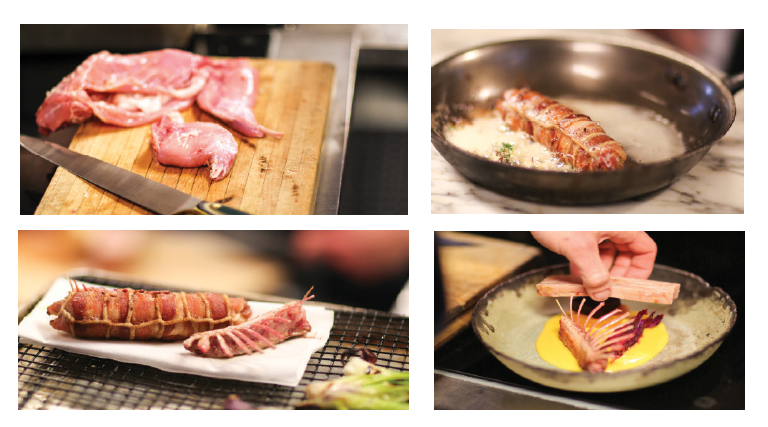 Why don’t Americans eat more rabbit? After all, rabbit and other small game were a significant component of the continent’s diverse protein palate in the early 20th century. In much of western Europe, rabbit is still a familiar dish on the table from rustic English farmhouse dinners to haute French cuisine.

Most culinary historians agree that the culprit isn’t so capricious as a moral or cultural shift away from eating Peter Cottontail. Rather, the 20th-century rise of large poultry conglomerates and breeding programs that emphasized big, boneless chicken breasts took over the typical American family table. Also, economics triumphed: The higher feed required vs meat obtained ratio skewed mightily toward chicken as a superior cost-per-pound producer. For the family farm larder, having a year or two of egg production prior to prepping a hen for the freezer also gave chickens a distinctly flexible appeal.

Now, raising rabbit for consumption is a seeing a rebirth of sorts, especially in the U.S. backyard homesteading community. Due to their comparatively weak immune system, rabbits do not survive or thrive well on an industrial scale. Food activist Michael Pollan notes that rabbits eat abundant alfalfa (instead of energy-expensive soy or fish meal) and are legendarily, um, fecund. Also, American eaters are becoming a bit more adventurous, and restaurant chefs relish an opportunity to bring something interesting and unique to the plate.

“One of my favorite dishes is rabbit legs, confit style,” he says, especially when they’re served with a bounty of late-season vegetables. In keeping with his philosophy of using the whole animal in all of his restaurants’ preparations,Handly walked me through his strategy for using the less-frequently utilized portions of rabbit: the loins, flank and bony mid-section.

Crucial to all of this meticulous butchering is using a very sharp, lightweight knife. Fortunately, Corey Milligan, owner of New West KnifeWorks (which has a new shop on Main Street in Park City), had recently dropped by with a roll of knives for Handly to sample while we broke down a rabbit into its constituent parts.

In addition to a rabbit loin porchetta (recipe featured here), Handly had previously saved the lean flanks from dozens of rabbits, pressed them together with fat and seasoning, and then brined them to make a kind of rabbit strata. He meticulously frenched the ribs to make a miniature standing rack. Handly also set aside the saddle and foreleg meat to potentially grind into flavorful sausage and reserved the bones to roast and to turn into fragrant stock. Eventually, he pulled the bacon-wrapped rabbit loins out of the refrigerator where they’d been resting, then basted the rabbit porchetta in butter and herbs. The resulting dish was nuanced, unexpected and packed with the rich flavors of fall.

Rabbit Porchetta Butchering technique and recipe
Butchering small game like squirrel and rabbit is roughly similar to breaking down a chicken by following along the natural sections of joint and muscle mass. However, there are a few additional considerations. Broken rabbit bones are incredibly

sharp, so it’s essential to pop the joints and separate at the ball with the point of a very sharp knife, rather than using a cleaver and risk bone fragments in your meal.

The longer, leaner body mass of rabbit means that the money meat is in the hindquarters (rather than breast); that’s the portion Handly saves almost exclusively to confit for another spectacular bunny dish. The rest of the animal takes more attention to preserve the maximum amount of meat. It’s delicate, meticulous work; using a sharp paring or boning knife is essential. Watching Chef Handly’s technique for cleaning and frenching a tiny rack of rabbit ribs is a thing of beauty—not something that I’ll be tackling in my home kitchen any time soon.

A more reasonable recipe for a home cook is a streamlined version of Handly’s elegant rabbit porchetta, which uses the often-overlooked long sections of tender rabbit loin (which run the length of the animal parallel to the spine on each side). For the rabbit three-ways dish photographed here, the porchetta is the cross-cut round portion of rabbit served with stunning selection of roasted, grilled and pickled fall vegetables over a divine roast root vegetable purée.

Process
Pat dry the rabbit loins with a towel. Generously coat all sides of the rabbit loins with dry rub; shake off excess. Press together all the loins lengthwise to make an evenly shaped roll. Wrap the rabbit roll with slices of bacon and cover tightly in plastic wrap to seal and compress all sides. Rest in the refrigerator for 2 hours or overnight.
Remove the rabbit porchetta from plastic wrap and secure with twine spaced at 1-inch intervals to keep the shape intact during cooking. Over medium-high heat in a heavy pan, add about 1 teaspoon grape seed or other neutral-flavored oil. Sear the porchetta on all sides, rolling frequently to cook and brown evenly. After about 8 minutes, add the knob of butter to the pan and cook until melted and frothy. Add the thyme and garlic to the butter and continually baste the porchetta with the herbed butter, moving the porchetta frequently in the pan to coat evenly, about 2-3 minutes. Remove from pan and rest on a cutting board about 5 minutes before slicing into 1-inch rounds.

Where’s the Rabbit?
Where to source rabbit and how to break it down
Chef Handly sourced the rabbit for the featured recipe from Liberty Heights Fresh (1290 S. 1100 East, 801-583-7374, LibertyHeightsFresh.com), a local market that stocks frozen rabbit when available or upon special-order request.

Many cooks rely upon the butchers of family-owned and operated Main Street Quality Meats (2685 S. Main, 801-484-5295, MainStreetQualityMeats.com), serving Salt Lake City since the 1950s. Frozen rabbit is always in stock and available at the retail shop (approximately $8.99/pound, whole only).

From field to plate

In Utah, the most prevalent species to hunt are cottontail and jackrabbit (which, for sticklers, is actually a hare) and in much smaller numbers, snowshoe hare. Cottontails are a white-meat animal with the curse of being both prolific and delicious. Jackrabbit is ubiquitous to Utah’s sagebrush country, and the meat is dark and a favorite for braising. Winter is prime rabbit-hunting season through February. Check the Utah Division of Wildlife Resources website (Wildlife.Utah.gov) for information about licensing, hunter education, firearms safety and seasonal restrictions.

Care should also be taken when harvesting and butchering, especially with regard to risks associated with tick-and-flea borne illnesses, parasites and the bacterial disease tularemia (Francisella tularensis), which can cause serious illness in humans from exposure or ingestion (see Wildlife.Utah.gov for more information). There’s a reason why hunting small game such as rabbit is a great introduction for new or young hunters: Rabbits are wily, and you have to become very good at being quiet to get close enough to shoot them with a small-caliber rifle or shotgun. Hunting and field dressing rabbit is a phenomenal lesson in anatomy as well as the responsibility of safely handling firearms and the respect that one should have for every creature we consume by reducing wanton food waste.

Hunting advocate and outdoors writer Steven Rinella, and forager Hank Shaw are masters at describing in basic terminology how to hunt, evaluate, field dress and butcher game meat. When I started getting seriously into preparing our own family’s field harvest, I relied heavily on Shaw’s book Hunt, Gather, Cook: Finding the Forgotten Feast, and Rinella’s encyclopedic The Complete Guide to Hunting, Butchering and Cooking Wild Game, Volume 2: Small Game and Fowl. I also watched a lot of YouTube videos posted by Rinella (who is also host of the TV show MeatEater) to walk me through the process.