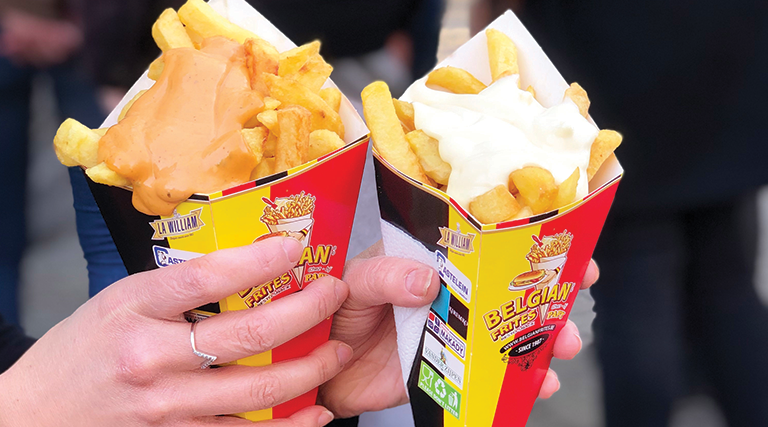 If you asked almost anyone in America what Belgium is most known for, the answers will likely include waffles and frites (and probably beer and chocolate, too).

The country is a food lover’s paradise and any of these delights are easily procured in Brussels, Bruges, Ghent or one of the other charming cities that make up this small but mighty nation.

A walk down the cobblestone streets of Belgium’s capital of Brussels near the Grand Place will put you close to shops with lines dozens deep waiting for hot waffles from Maison Dandoy or frites from Chez Papy or Fritland.

If you’re nodding you head while picturing the North American version Belgian waffles (the ones made with lighter batter, larger squares and deeper pockets than your average Eggo), you can shake your head “no” now.

To clarify, there are two different kinds of waffles in Belgium and neither are called Belgian waffles—that’s just an American breakfast food we invented! However, the yeast-raised Brussels waffle or (gaufre de Bruxelles) is certainly what our version is based on.

The Liège waffle, on the other hand, is the confection that many think of when they reflect on the Belgian offering; it contains pearl sugar that caramelizes when heated.

Liège waffles are traditionally served hot and plain to get the full burst of flavor of the pearl sugar. However, you can add fresh fruit, chocolate drizzle or a multitude of other toppings—including freshly whipped crème fraîche for a sweet treat virtually any time day or night.

Aside from waffle shops, frites (French fries) stands are in abundance all over Belgium, too—and they are said to have been invented there despite the French part of their name. Frites are served in a cone with your choice of dipping sauces and a tiny fork. From rich mayonnaise to spicy Andalouse (slightly similar to Thousand Island dressing), there’s a sauce for every taste. You’ll also find frites served with many meals in Belgium, including the ever-popular steak and frites and mussels and frites.

If you haven’t had the chance to travel to the Belgium or haven’t visited in a while, you can get your fill of both of these Belgian delicacies from Bruges Waffles & Frites (BrugesWaffles.com) here in Utah at the storefront locations in downtown Salt Lake, Sugar House or Center Street in Provo.

You’ll also find their Bruges Waffle Bus serving up Liège waffles filled with imported Belgium sugar pearls around the valley. The most popular waffle order in all locations is aptly named the “Favorite” and is topped with crème fraiche and strawberries.

The Brugesmobile offers a selection of sweet and savory items from the storefront menu—like their custom-designed Morgan Valley merguez sausages using only meat from grass fed and pasture raised sheep around the Wasatch Front—at food truck events around Utah.

Whatever your favorite Belgian food is, it’s easy to get an authentic bite anytime at Bruges Waffles & Frites.