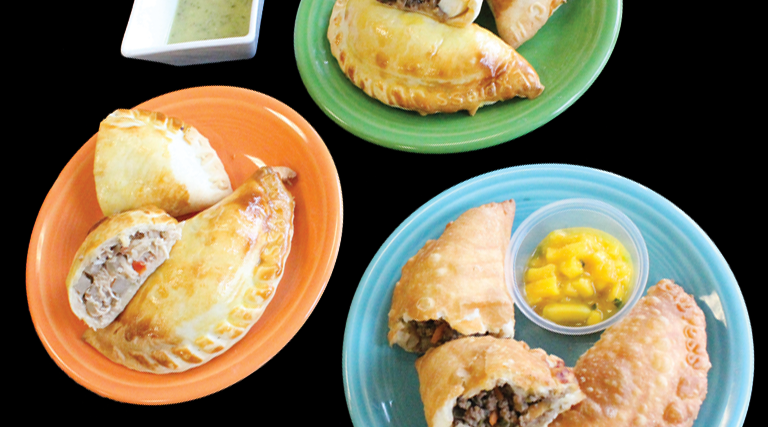 A dumpling feast from around the globe

For centuries, bakers and cooks from around the world have been making dumplings, pockets and purses filled with savory meats, spicy veggies and sweet and sour fruits. Dumplings represent a staple of many culinary traditions and give us small bites of spice and flavor to help us better know the cuisine of other cultures. The ideas for wrappers and fillings are endless but one thing’s for sure: pocket foods remain a favorite around the world and can be enjoyed any time of day.

For this month’s Fab Four, we’ve sought out some of the area’s tastiest dumplings. If you’re not familiar with them, we hope you’ll step out of your comfort taste zone and give them all a try!

Running on empanadas
While these tasty half moon-shaped, filled hand-pies are popping up all over town, it’s hard to beat Empanada Express. Entrepreneurs Meredith Alfaro and her husband, Oliver, have been busy breaking the fast-food mold. Diners marvel at how something this tasty, authentic and wholesome can be prepared both quickly and affordably. Branching out from Oliver’s Venezuelan roots, this couple started their business offering two traditional favorites: an Argentine chicken empanada and a Venezuelan steak empanada. “We decided to expand to other South

American countries,” Meredith says. After years of testing recipes to highlight the cuisines of Cuba, Jamaica, Colombia and others, the menu is wide-ranging and features delectable sides, sauces and desserts.

More momos
Momos are a staple in Tibetan cuisine, and locally, Cafe Shambala is celebrated for serving up all things Tibetan. Momos are among their most popular items, filled either with beef or vegetables. Our favorite is the vegetarian momo, a flour-based bread stuffed with potatoes, carrots, peas, beans, cabbage, cilantro, turmeric and celery. Handmade, cooked either steamed or fried, and accompanied by a ginger sauce (made with a secret recipe), these momos will knock your socks off with a house chili sauce, rated next-level spicy.

Wait for it—sambusa!
This mom-and-pop gem offers Middle Eastern and African dishes at affordable prices. Their sambusas are a Somalian dish that’s traditionally served at holidays, weddings, parties and just because. A savory combination of beef, onion and veggie fills thin, crispy-fried wrappers. They’re best served with a lemon wedge and the creamy housemade hot sauce, finished with a mandazi roll (sold separately). Sambusas are made to order, and your wait is well worth it.

Craveable kibbeh
Kibbeh is a Middle Eastern craveable dish you’ll want again and again. Luckily, Salt Lake City now has authentic Lebanese cuisine at a number of places including the Beirut Cafe. Newly opened this past summer and family-owned-and-operated, Beirut Cafe’s housemade fried kibbeh is stuffed with seasoned ground beef, onions and pine nuts encased in fine ground bulgur wheat. It’s unlike any other appetizer. The result is a burst of juicy flavor in a falafel textured crust. Served a la carte, you’ll also want a side of yogurt sauce for dipping. “The flavors are traditional, just like back home,” says Habib Soweidan, manager and owner.