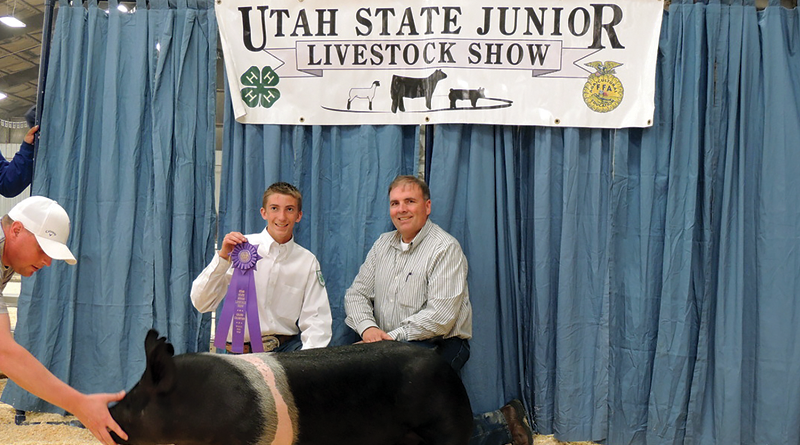 Livestock auctions also occur at county fairs throughout the year.

One of the most unique livestock auctions, however, happens but once a year—the Utah State Fair Junior Livestock Auction. Here, members of the 4-H and Future Farmers of America (FFA) bring the animals they’ve raised and cared for to be sold to the highest bidder.

The FFA and 4-H are both youth organizations. The former focuses primarily on youth development through agricultural education, while the latter offers projects in several areas in addition to agriculture, including health, science and civic engagement.

For more than 60 years, the FFA and 4-H have brought sheep, goats, pigs and market steers to be judged and sold at the Utah State Fair, which runs 10 days at the State Fairgrounds west of downtown Salt Lake City every September starting the first Thursday after Labor Day.

Every animal that makes it to the state fair’s auction must be owned and reared by a member of either the 4-H or FFA. Ranging in age from 8 to 19, these young folks put in the time, energy and money to raise animals of superior quality in hopes of winning a blue ribbon and profiting from their labor.

Fair director Judy Duncombe says that, for many youth, the auction “is the culmination of a project that not only teaches them the skills of raising an animal, but the value of record keeping, livestock and money management, responsibility and other worthwhile life skills.” Duncombe says that those buying livestock are investing in the future, since many 4-H and FFA members use that money for college
Jessie Hadfield is a professor at Utah State University Extension who works with Utah 4-H and youth programs. She says that the hands-on aspect of 4-H livestock projects is what makes it unique. “The youth are involved from start to finish,” she says. “These animals are handled daily, are given the best food and are kept out of the elements.” As stewards of livestock, young people learn valuable life skills that help them in their future endeavors, she says.

Animals at the state fair are judged using the Danish system, Hadfield says, using blue, red and white ribbons. While blue is the highest award an animal can receive, a white ribbon means the animal needs improvement. To be eligible for auction, an animal first must earn a blue ribbon. In most cases, animals judged to be a red or white standard could still be improved and are sold at one of the other five state-sanctioned Junior Livestock Auctions, or at county fairs throughout Utah.

Thus, livestock offered at the state fair are the crème de la crème of 4-H and FFA livestock. Other auctions have less youth involvement and sell animals that may not be top of the line, and with less information as to where they were raised and what they were fed.

“For the environmentally conscious consumer,” Hadfield says, “4-H livestock are given the best care and, because they are local, also have a smaller carbon footprint.” Consumers pay for the quality, to be sure, but the total cost is still much less than if they were to buy individual cuts. “These types of auctions,” Hadfield says, “are designed to help youth and the junior livestock program, and so the prices are inflated to reach that goal.”

Nevertheless, getting a small group of friends or family members to go in together on an animal auctioned at the State Fair Junior Livestock Auction is an economical way to fill the freezer with top-quality meat. Knowing that proceeds go directly to helping a kid pay for college or turn a small profit from months of diligent effort and record keeping just makes that steak taste all the better.

How it works: Register as a buyer the day of the auction in the livestock show ring where you’ll be given a numbered card. To bid, raise your card after the sale begins. A buyer has the option to pay to have the animal custom slaughtered or they can “boost” the animal, which means the buyer makes a financial gift to reward a youth for their efforts (but does not take the meat home). The buyer pays only the “boost” price, which is the difference between the selling price bid by the buyer and the actual market value of the animal.

What you bring home: If you have the animal slaughtered and processed, you can expect to fill your freezer with the following quantities:

(estimates are for bone-in, trimmed products
and will depend on each individual animal as well as meat processing)