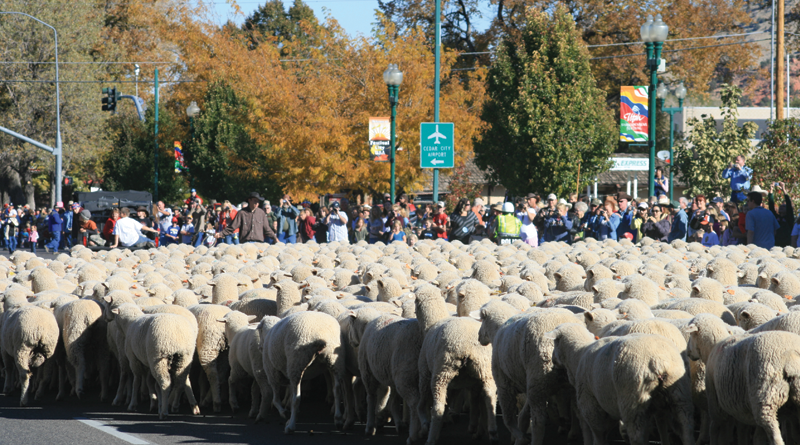 Catch the wooly parade at the Cedar Livestock and Heritage Festival

Traffic jams on Cedar City’s Main Street are not a common sight. The central Utah town is best known as the home of the Tony-winning Utah Shakespeare Festival and for its year-round recreation in the nearby high-desert mountains. But on one weekend each fall, traffic grinds to a stop, and the street goes to the dogs—sheep dogs, that is, and the wooly flocks they tend to. The herding of a thousand-head of sheep down Main along with a parade of antique tractors, sheep camps (sturdy trailers used by shepherds) and horses is a reminder of the Old West’s livestock heritage, traditions that live on in Iron County.

“There used to be livestock trails all around and through town,” said Donna Christensen, a member of the executive committee organizing the 14th annual Cedar Livestock and Heritage Festival taking place Oct. 24-27. “In the fall, people would bring their sheep down from the summer pastures on Cedar Mountain and move them to the valley for winter,” she says. “This is a way to celebrate that tradition and what it has meant to this area.”

According to the Utah State University Extension’s Chad Reid—himself a graduate of what is now Southern Utah University and now serving as this year’s parade grand marshal—sheep have dominated the area’s livestock industry since the 1890s when prominent local ranchers purchased a herd of sheep from Colorado.

“The livestock men soon realized that sheep were ideally suited to southern Utah ranges, especially the mountain summer ranges where Larkspur (Delphinium barbeyi) was common,” Reid said in an academic report on local history. “This plant is highly toxic to cattle but is well tolerated by sheep and is considered valuable forage for them.”

“We’ve had people from all over the world show up to this event. It’s a fun fall tradition for a lot of people,” Christensen says.