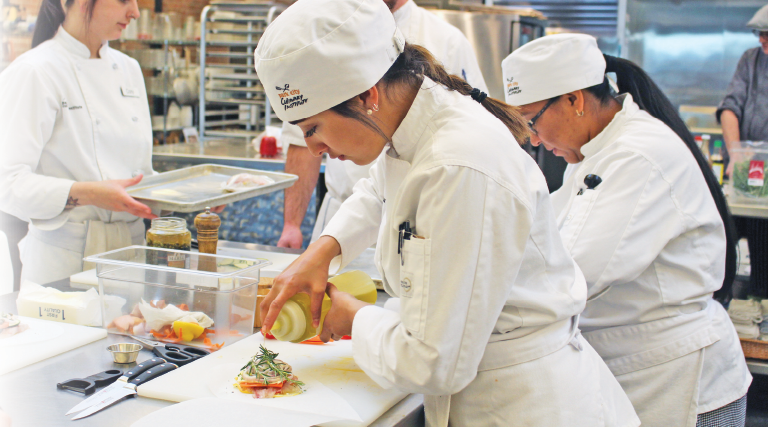 From professionals to hobbyists, Park City Culinary Institute offers something for everyone

If Park City Culinary Institute founder and director Laurie Moldawer could tell you one thing about her school, it would be this: It’s for everyone. For the high school grad looking for a path. For the home cook hoping to improve. For the 60-year-old wanting a career change. For the couple in search of a date night.

“Because people are so familiar with the community college and state school model for culinary school, they think that it’s just for 18-year-olds or that you already have to know how to cook,” says Moldawer. “Half of our students are over 40, and you can come with zero skills. Once they realize that, they enroll.”

Like many of her students, Moldawer did not have a direct path to her culinary career. After years of working as a tax accountant in New York, all while nurturing a love for dining out, she decided to take a year off to attend Le Cordon Bleu in Paris at age 29 with next to no cooking experience. When she returned to the U.S., Moldawer continued working as an accountant by day, and at night, she’d slip into her kitchen uniform and work the line at a restaurant.

In 2012, Moldawer decided to shake things up again — this time with a coast-to-coast road trip in search of the best ski town to call home.

“I drove into Park City and when I came to Main Street and saw all of the lights and the energy, I was like, ‘OK, I can see living here,’” recalls Moldawer. “I called the moving company and said, ‘ship my stuff out’ and stayed.”

After seeing firsthand the need for qualified, trained employees in Park City’s restaurant industry, in 2013, Moldawer took the first step to get her culinary institute off the ground and began offering 2- to 3-hour recreational courses while gaining support for a more comprehensive program.

“I could walk into a restaurant, talk to the chef and tell him I was opening a culinary school, and everybody wanted to be involved. All of the chefs offered to teach and were really passionate,” Moldawer says.

With the help of a growing team, Moldawer crafted an accelerated culinary program that had students trained and kitchen-ready in at most four months versus the more common two-year track seen at other culinary schools around the country. PCCI was modeled after the “boutique” institutes in Europe with class sizes no bigger than 16.

Today, the award-winning faculty lineup includes notables like long-time baker Roy Olsen, who opened Bake 360 and is a multi-time winner of Best of State; Derek Gherkins, former chef at Park City’s Grappa and Ghidotti’s; prolific chef instructor Cheryl Schaefer who worked at Utah restaurants like Faustina and Forage; and Jordan Miller, chef at the Lodge at Blue Sky, to name a few. A rotation of visiting chef instructors impart their area of culinary expertise, too.

Two and a half years ago, PCCI moved into Salt Lake City to accommodate the growing number of students commuting from the valley. With a more convenient location, the school graduated 120 students this past year, compared to the 30-45 annual grads it saw while in Park City.

“We’ve seen this overwhelming growth in the restaurant industry. We get five times as many calls from employers as we do from students,” explains Moldawer. “We can’t graduate enough students to meet the demand. It’s everything from restaurants to nursing homes. It’s hotels and bakeries.” 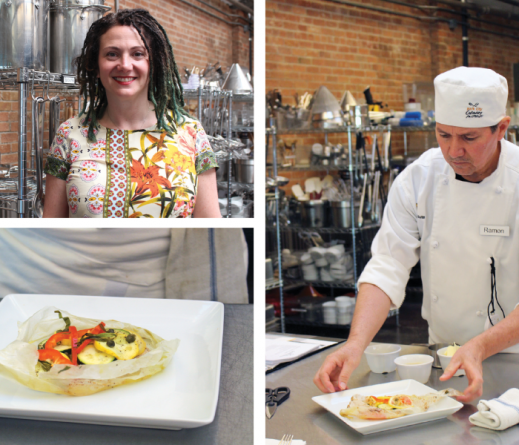 Successful Grads
To date, PCCI has graduated more than 300 students from across the country. And within the burgeoning restaurant scene of northern Utah, its grads are making waves.

PCCI grad Kayden Petersen-Craig was working as a corporate trainer for a mortgage company when he suffered a spinal cord injury that left him in a wheelchair. “I had a lot of time in the hospital and at home to reflect on my life and what I wanted to do with it,” says Petersen-Craig. “I wasn’t going to keep wasting away my days doing something I didn’t love to do.”

He grew up cooking and had always dreamed of owning his own restaurant, so when he drove by PCCI, he decided to go in and see if it would be possible.

“Laurie [Moldawer] was so enthusiastic. She said, ‘We’ll get you a ramp and build you a table,’” recalls Petersen-Craig. “So, they built me a custom prep table, and I graduated culinary school in my wheelchair.”

Post-graduation, Petersen-Craig faced a lot of rejection as he applied for jobs in restaurants.

“None of the spaces were conducive for a person in a wheelchair,” says Petersen-Craig, who was in physical therapy relearning how to walk.

But he persisted, and this past June, Petersen-Craig bought his own restaurant in Ogden, Cafe VilleBella, where he serves up breakfast and lunch.

“To my knowledge, I am now the only transgender gay restaurant owner in the area,” says Petersen-Craig. “Culinary school gave me the reality that my dreams can come true regardless of disability or limitations.” 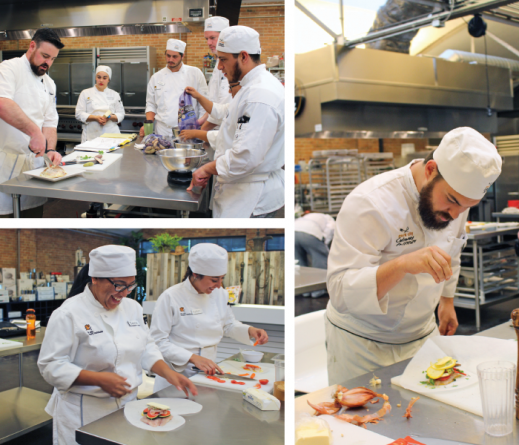 Something for Everyone
After graduating high school, now-PCCI alum Jonathan Price wasn’t sure what to do next.

“I grew up cooking and loved baking,” he recalls. “So when I heard about Park City Culinary Institute, I thought it sounded like a good fit.”

After graduating, he landed a job as a pantry cook with Ruth’s Chris Steak House in Park City. Just four years later, at the age of 21, he became the restaurant’s executive chef.

“I never imagined I’d be promoted like I have,” Price says. “I went into school knowing very little about the culinary world, and it was a great opportunity to learn the basics without having to devote two years of your life to it.”

For others, like PCCI instructor Todd Gormley, the road to life as a chef was less direct. After a back injury derailed his construction career at 32, he spent 12 years working in senior management at Lowe’s Home Improvement before deciding to spend his evenings pursuing his passion for cooking at PCCI—all while continuing to work.

“We have people that want to be better home cooks, people that already have careers that want to learn how to cook, people who want to go into the industry, people who are looking to reshape their lives. It’s a good mix of all of that,” says Gormley. “I think that makes for a great experience here at the school because you have so many different influences from so many different backgrounds.”

Today, Gormley teaches the recreational classes at PCCI, 3-hour courses pairing international cuisine with on-theme drinks, like tamales and tequila, wine and cheese of Spain, and ramen and sake.

The school also offers workshops open to the public featuring prominent figures in the food industry, including PCCI alum and founder of Kodiak Cakes, Jon Clark. Clark will lead a discussion on Oct. 7 about how he created Kodiak Cakes and what it took to bring a food product from inception to market.

“We’re programming over a dozen community classes a month. We’re always evolving,” says Moldawer. “I didn’t go to culinary school ever thinking it would turn into a career like this. I didn’t have a plan of ever owning a culinary school, but it’s been an amazing journey.”

Undoubtedly, the hundreds of PCCI grads working in kitchens and opening restaurants in Utah and beyond would agree.

Discover Your Culinary Path
Interested in cooking school, but unsure about committing to a multi-week program? Dip your toe in with one of Park City Culinary Institute’s 3-hour community cooking classes (ParkCityCulinaryInstitute.com/cooking-classes). Learn about everything from cast-iron cooking and Chicago deep dish pizza, to pickling and Moroccan cuisine.

PCCI offers 228-hour professional certificates in the culinary arts, 120-hour cuisine certificates and 108-hour pastry and baking certificates, with tuition ranging from $5,900 to $10,975.

PCCI also provides free 15-minute consultations if you’re interested in learning about the different options you have in programs and future careers. It’s the perfect way to test the waters before jumping into a course (ParkCityCulinaryInstitute.com/career-advice).