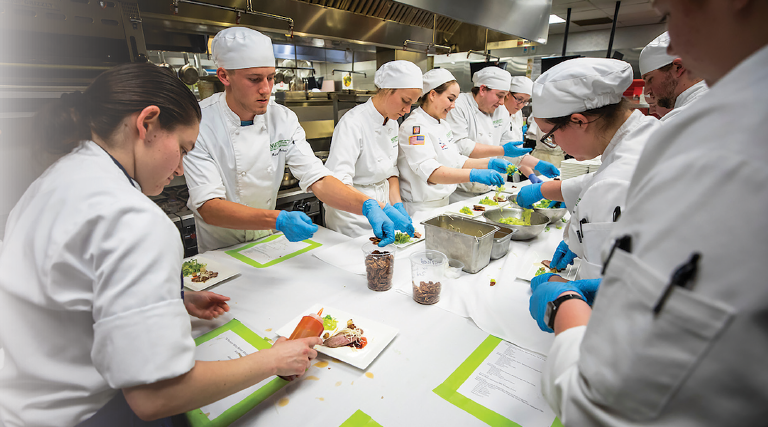 The hospitality industry is booming in Utah, which means that there’s a steady demand for qualified culinary professionals at all levels. “We have been desperately trying to recruit more staff in restaurants,” Michele Corigliano, executive director for Salt Lake Area Restaurant Association (SLARA), says. “Restaurants are scrambling.”

As an example, a quick search of the Utah Department of Workforce Services notices for food preparation jobs with the keyword “cook” listed more than 650 openings.

Gastronomy Inc. director of operations Fred Boutwell agrees that it’s an incredibly competitive employee-driven market, especially for jobs as dishwashers and line cooks. “Once people come on staff, we have very good retention of our employees,” Boutwell says, noting many staffers move up through the kitchen hierarchy with in-house training if they have the initiative to do so. “Our challenge is recruiting new staff,” he says, acknowledging a national shortage of hospitality employees.

He recommends that before students invest time and money in advanced culinary education, they have realistic expectations of what working in a busy restaurant kitchen is like. “I tell them to come into a kitchen and watch during a busy Friday or Saturday night,” Boutwell says. “Take the opportunity to observe the reality of a bustling crew and the physical demands of standing for a 10-hour shift.”

Catherine Burns, Gastronomy’s human resource director, also cautions that newly minted culinary-school graduates shouldn’t expect to get competitive executive chef positions or land jobs with a lot of creative control right out of the gate. She suggests that those considering a culinary career work for a year or two in a restaurant kitchen as a dishwasher or line cook before they invest in culinary school. “It behooves a person to make sure they have [actual restaurant] experience and know if they are going to like the industry,” Burns says, before committing to the rigors of the culinary world.

Boutwell agrees, noting with wry understatement, “It’s not like a cooking show on TV.”

With these caveats in mind, we surveyed a handful of northern Utah’s culinary education programs to see how they are preparing the next wave of curious cooks. When talking with program administrators, they noted that students in their programs come with a wide range of professional and personal goals. From dreams of operating their own food trucks to filling steady (and relatively well-paying) jobs in hospital or retirement home food service or reaching for a five-star resort position, it all starts with the basics. 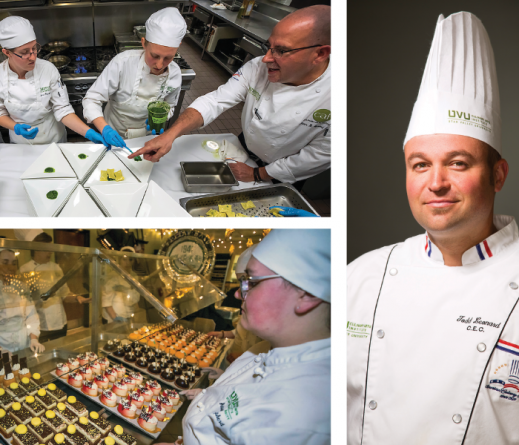 Additionally, CAI faculty and students have been racking up the awards. As one of Utah’s most famous bakers, former CAI instructor chef Adalberto Diaz—owner of Fillings and Emulsions pastry shops in Salt Lake City and Provo—has won multiple Food Network competitions, including the 2019 “Bake You Rich” winning title.

And this year marks the fourth straight year that a UVU student was named Western Region Student Chef of the Year, with two previous winners going on to win the coveted national student chef of the year award.

In an interview for UVU press, El-Farra described the competition as “intense.” Even with extensive preparation leading up to the competition, she said her nerves were on edge with judges standing over her, watching her every move.

To complete the Associate of Applied Science Degree (AAS) in Culinary Arts, students must participate in a pre-requisite semester of classes covering kitchen basics (such as culinary math, sanitation and introduction to hospitality), which most students complete during the summer before starting full-time enrollment. The AAS degree program consists of an additional 68 credit hours completed in a minimum of five semesters, with most of the 140 or so students taking 12-18 credit hours per semester. There are full day and evening classes available, and with the UVU program being in such high demand, the campus recently added three new state-of-the-art instructional kitchens.

“Students get a lot of hands-on experience,” says CAI academic advisor Tina Ostler, with opportunities at the university cafe, at the fine dining Restaurant Forté in the UCCU Center and at the CAI catering division serving parties of up to 3,000 people per event. 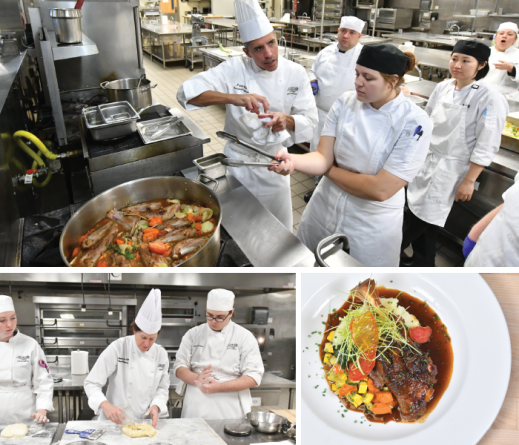 Salt Lake Community College Culinary Institute
Located at the Salt Lake Community College Miller Campus in Sandy, the Culinary Arts Program has been led for the past two and a half years by chef Jeffrey Coker. Formerly at the prestigious Le Cordon Bleu College of Culinary Arts in Los Angeles, Chef Coker joined the SLCC program seeing an opportunity to strengthen and build on an established culinary curriculum and to improve his family’s quality of life with a move to Utah. “I’d been looking to get out of Southern California since 2009,” Chef Coker says of the hectic environment. “Coming to Utah added years back to my life,” he says with a grin, noting that having motivated, talented and well-rounded students has been a highlight of his work with SLCC.

An average of 140 students are enrolled in a full- and part-time basis at SLCC’s Associate of Applied Science degree in Culinary Arts. They may choose an emphasis in baking and pastry or culinary arts, and there’s also an AAS degree in hospitality management. “Our Culinary Arts degree is programmatically accredited by the American Culinary Federation,” says Coker. Students who choose to add this ACF offering receive a professional industry certification as a Certified Culinarian by demonstrating proficiency in several knowledge and skills concentrations.

In addition to the professional kitchens, the SLCC Miller campus recently added a student-cultivated kitchen garden, which is fertilized with composted produce collected during cooking instruction. They’ve made conscious efforts to reduce food waste and emphasize sustainable sourcing.

Coker says that the program is best known for “offering excellent training and develop[ing] educational opportunities for our students at a very affordable cost.” But Coker says that the certifications on paper are secondary to the individualized professional and personal support students receive at SLCC, where the department actively integrates input from industry partners. “Current trends, techniques and skills that our students need to know when entering the workplace,” are considerations he notes from the collaboration with hospitality leaders such as the Little and Grand America, Hilton and Marriott. “As an administrator and chef, I get to know the students. They go on to successful careers in fine dining, retirement communities and resorts,” meeting the high demand for skilled cooks in Utah. 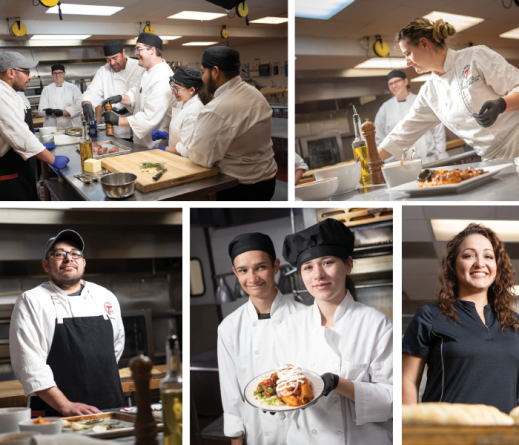 “Culinary students in our program learn by practicing their skills in a real production kitchen, working alongside their instructors,” Ruiz says of the approximately 10-month certificate of completion program. Many of the approximately 50 students enrolled annually are high school students, and as they are typically attending Otech part-time, it takes them a bit longer to finish the certification.

All students complete a standard culinary skills foundation during the first part of the program (about 70% of the total coursework), and then can choose between an advanced culinary track or advanced baking and pastry. “The program can be customized based on student interest,” Ruiz says of the different track options, including an emphasis on specific cuisine types or honing a specific skill like charcuterie.

Acknowledging an industry emphasis on more in-house preparations and increased student interest in the subject, the college purchased a new smoker and is adding more curing and smoking techniques to the roster.

The baking and pastry track includes sweet and savory applications, laminated pastry like croissants and several types of bread making.

“We find that this creates a great balance of engaged active learning and independence, while providing enough guidance and support for students to perform skills correctly,” Ruiz says of the varied curriculum. 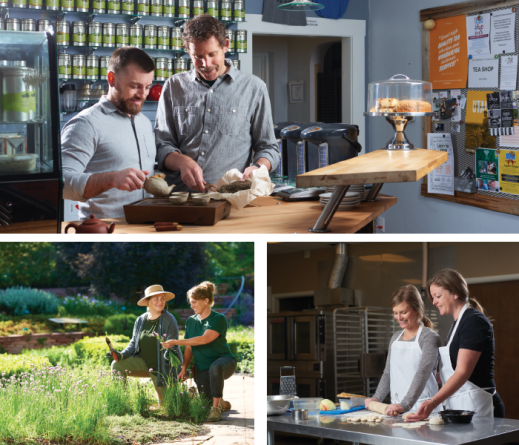 University of Utah Lifelong Learning
“As the number of places offering cooking classes has risen in Salt Lake City, we’ve moved away from the ‘How to Cook This Cuisine/Dish’ model,” says University of Utah Lifelong Learning program coordinator Mïa Vollkommer. “We are instead focusing on the cool things local food and beverage businesses are doing.”

In selecting course topics and instructors, Vollkommer says that getting to the root of a person’s passion is engaging and successful as an instructional model. “Once I can identify what a business is passionate about, then it’s just about guaranteed that everyone—students and instructors alike—will have a fantastic experience together in class.”

Vollkommer notes that enrollments have been great for all of the food and beverage classes, which range from exploring tea, homebrewing beer and making fruit wine to camp cooking, making dumplings, cake decorating and touring Red Butte Garden in search of edible flowers. A popular two-session photography class focuses specifically on capturing mouthwatering images of food, with pro tips on food styling, lighting and advertising secrets.

“The focus on local businesses has been a really successful programming strategy for Lifelong Learning,” says Vollkommer of their class model. “I think that individual businesses are reaping benefits from teaching for us as well.” Vollkommer says that developing programming is an exciting two-way street, with students requesting particular topics and Vollkommer’s team reaching out to new community collaborators for ideas. “When I’m seeking out new partners, I turn to every kind of media I can get my hands on,” she says, mentioning Devour and other media outlets, “and my very favorite resource: Instagram!”

Always on the hunt for people who are enthusiastic about sharing their talents, Vollkommer loves to hear from prospective instructors saying, “If you have an idea, definitely hit me up.” Visit their website (below) or follow on social media @uofulifelonglearning