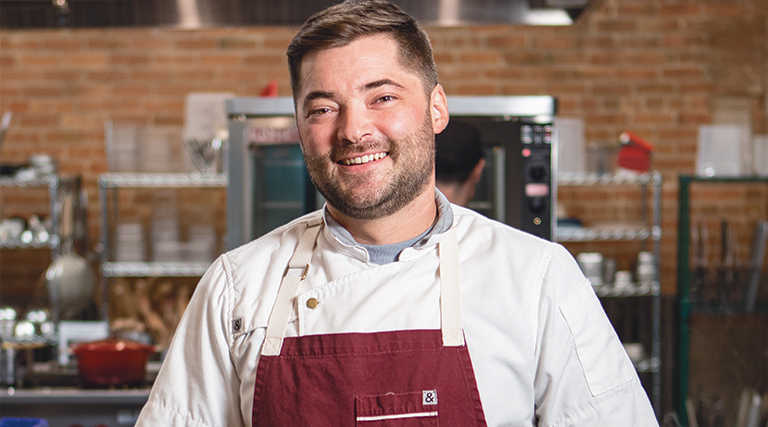 Chef Jordan Miller has been on the culinary road since he was 14. His first job was in an upscale restaurant in New York City, and he has since gained culinary experience in other kitchens in North Carolina, Pennsylvania, California, New Jersey and Delaware. He’s even spent time in Ecuador, where he attended culinary school and studied Spanish and creative writing at the University of San Francisco de Quito. Ecuador was where Miller first began foraging for food to create flavorful dishes. With every move he has made since, Chef Miller makes it a point to learn about ingredients that grow wild in his locale to incorporate into the menus of whatever kitchen he’s working in.

Thanks to his ski-loving wife, Miller has put down his roots in Utah for the past four years.
Currently, you can find Miller teaching cooking classes at Park City Culinary Institute as well as working at the new fine-dining restaurant at the Lodge at Blue Sky in Park City.

“This is a dream job for me,” Miller says of his new gig at the 3,500-acre mountain retreat with a world-class dining experience. Not only does Miller bring his culinary talents to the restaurant itself, but he also prepares private feasts for guests on outdoor adventures like horseback riding and fly fishing. His patrons enjoy dishes that are locally sourced from the surrounding landscape.

When he’s not cooking for others, Miller can be found hiking with his wife and dog, most often in the Uinta Mountains, where he looks for greens, goji berries, nuts and sumac spice to use in his cooking. Though he’s reluctant to give up the location of his prime foraging spots (and who could blame him?), Miller says that porcini mushrooms are some of the easiest wild produce to find in Utah. “Because of all the rain we had in Utah this year, anything that does grow here will grow in abundance, and porcinis are the gold standard in foraging,” Miller says, noting that they can be found not only in the wilds but in Pioneer Park, around the University of Utah and in the Cottonwood canyons.

For this issue of Devour, chef Jordan Miller provided two dessert recipes, one for ice cream and another for syrup made from blue spruce tips. Yes, those piney trees are edible! Not only that, but when the desserts are combined, they create an exciting flavor that Chef Miller describes as a “minty piney bomb of deliciousness.”

To harvest the spruce tips, simply pop the tips off the end and discard the casings. Be careful not to overharvest a tree, just pick a few here and there. Once you’ve gathered what you need, you are ready to create your blue spruce tip ice cream and syrup, enjoy!

Process
Over a double boiler, heat the cream, milk, sugar, salt, syrup and egg yolks, whisking constantly to avoid scrambling the eggs and sticking to the bottom of the bowl. When the mixture starts to steam and is hot to the touch, remove from heat and allow to cool.  Then, add the spruce tips and puree with an immersion blender until mixture is thoroughly blended. Pass the mixture through a fine mesh strainer and allow to cool in refrigerator overnight. Spin ice cream using your favorite method.

Process
Bring sugar and water to a boil, then whisk until all sugar is completely dissolved. Once dissolved, turn off the heat and allow to cool. Once cooled for five minutes, add spruce tips to mixture and allow to cool to room temperature. I like to steep my syrup for 24 hours minimum. Once thoroughly infused, strain through cheese cloth and add fresh lemon juice. Store in refrigerator indefinitely.