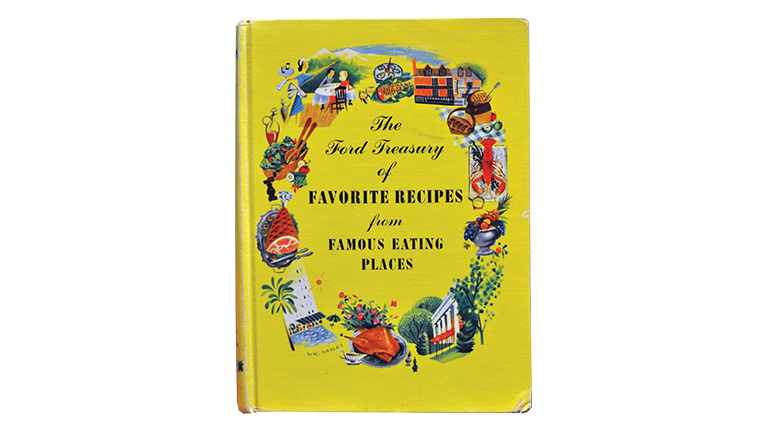 Eborn Books’ Main Street location is closing this summer, and it’s hard to resist a 50% off sale on their huge inventory. A happy score from their cookbook row was this diminutive hardback—the Yelp of its day: The Ford Treasury of Favorite Recipes from Famous Eating Places. Published in 1950 by the Ford Motor Company, the introduction reads, “We hope that it may be useful to travelers who know from experience that exciting food in an unusual atmosphere is often the highlight of an interesting motor trip—and the compensation for a tiresome one.”

That’s the way it goes for the foodie: the discovery of restaurants, bistros, bakeries, farmers markets, pubs and street vendors encountered while traveling is every bit as compelling as seeing Mount Rushmore or Old Faithful erupting—maybe even more so. For food lovers, visiting certain eateries, such as Boulder’s Hell’s Backbone Grill and Maddox Ranch House in Perry or Heber’s Spin Cafe, is the reason for gassing up the car in the first place.

Ford’s Famous Eating Places included three eateries in Utah, one of which is still around: Kanab’s Parry Lodge. “In the hub of the national park area, this lodge is a favorite with tourists because of its true Western hospitality and its home-cooked meals,” reads the introduction to a 1950s pot roast recipe. However, today, you’ll need to seek out lunch and dinner at Kanab’s other highly rated eateries because the Parry serves only breakfast to its guests.

Finally, there was a recipe for broiled squab chicken from the once stately and since demolished (in 1983) Newhouse Hotel at 400 S. Main in downtown Salt Lake City. “Chef Mel Monthey has long been noted as the ‘the man behind the food’ at this hotel,” the recipe’s intro reads, “and now his creations are adding to the enjoyment of the new Royal Room.” (As an aside, Chef Monthey, who passed in 2003 at the age of 89, also operated the restaurant and catering for the equally grand Belvedere Hotel on Social Avenue prior to its units converting to condos.) For those wanting a taste of a posh midcentury-hotel dish, here’s Chef Monthey’s recipe:

Bone broiler and stuff with wild rice. Bruise garlic, then add mushrooms, parsley and brown sauce. Cover squab with this mixture and bake in hot oven for 25 minutes. Garnish with orange slice and maraschino cherries before serving.

It’s our wish that with Devour Utah’s “Road Trip” issue, our readers be well guided to road-trip worthy snacks, food co-ops, orchards, wineries, food foraging and friendly taverns and pubs in the Beehive and beyond. If we missed your favorite spot in this issue, post your tips on our Facebook or Instagram pages.
—Jerre Wroble