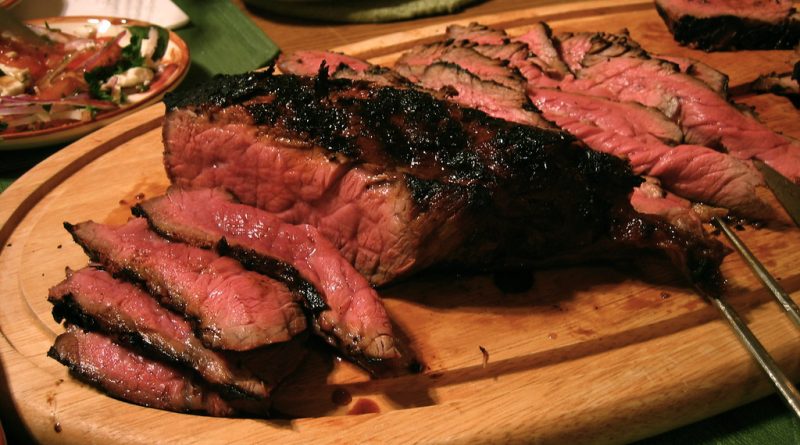 When I was a young adult, my dad took a job in California and, in so doing, become an epicurean of sorts. On a visit, I remember finding a chunk of tough beef in the fridge, soaking in a soy sauce marinade with finely chopped garlic, ginger and green onions. It soaked through the night, and the next day, we packed it up with a couple of loaves of fresh sourdough bread and a few ears of corn still in their husks and headed to the beach.

My dad made sure the hibachi’s coals were hot and ready when he dropped the unhusked ears of corn onto them. Then, he placed that rectangle of meat—called a London broil—onto the grill. It seared quickly, and as he turned it, I could see a nice char. It smelled fantastic. People who were walking along the beach were turning their heads toward the aromas.

After the meat was grilled, he let it rest, then sliced it across the grain into thin rare slices that we placed atop of sourdough bread slices, warm juices dripping into the bread. So tender and delicious! The corn also charred in its husks, and we peeled the ears, buttered the kernels and gnawed on them while standing up, butter dripping onto the sand. All pleasantly set off with sips of a cool California red from the ice chest that we had tasted and purchased en route to the beach.

So, what delicious memories are popping into your mind right now?

If we were at a cookout, we could swap ’cue tales over a summer beverage, like those Darby Doyle writes about this month in “Smokin’ Sips.” We could weigh in on the ’cue food trucks that sisters Mika and Cait Lee mentioned in their Fab Four feature or discuss Brian Fryer’s interview with the Livingston brothers about how to win at competitive barbecue. We could ask Rebecca Ory Hernandez to join us and bring her spicy Cajun shrimp and Amanda Rock could show up with her veggie skewers and vegan potato salad. John Rasmuson would be in charge of dessert, with a rice pudding he made “hay-box” style that you can read about in the Last Bite.

Such is summer—getting together with friends and family, remembering and wishing for things, cooking and eating under the beams of the sun or the moon while celebrating being alive.

But if you can’t afford the time away for such life-affirming activity, then do the next best thing. Order some delicious barbecue dishes prepared by the legendary pitmasters mentioned in this month’s Devour Dozen. Their painstaking efforts will likely surpass anything the average outdoor cook could pull off plus give us ideas on how to up our game.

Welcome to summer—and the feel-good issue of the year (aren’t they all, though?). ❖