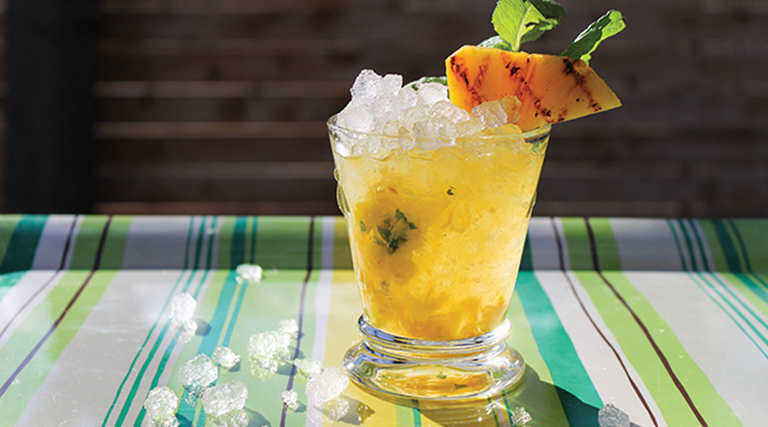 Drinks (and more) to pair with your summer cookouts

Booze and barbecue go hand in hand, whether you’re flipping burgers on the grill clutching a koozie-cocooned brew or sitting back, sipping whiskey and shooting the breeze with friends for hours while the smoker does its lip-smacking meaty magic. For this edition of Spirit Guide, we celebrate the complexity of flames and smoke as an ingredient while allowing the method and activity to reign supreme.

Grilled Pineapple-Mint Smash
Smashes are a fruit-forward and herbaceous drink within the category of juleps, served over lots of crushed or pebble ice. Very simply, it’s a suit-yourself kind of cocktail: Pick a fresh fruit, spirit base, herbs and lots of ice, and top with a little something fizzy, like soda. Simple to make and easy to batch for a crowd, smashes are best when made with juicy fruit and fresh herbs in season (mint is typical, but give rosemary or basil a try). Even better, throwing whatever fruit you’ve picked up at the Farmer’s Market on the grill further caramelizes the fruit’s natural sugars, releases juices and adds a nice smoky surprise element to this refreshing drink.

To prepare one drink: Drop pineapple and a few mint leaves into a julep cup or double Old Fashioned glass and crush with a muddler. Add rum and curacao. Pack the glass with crushed or pebble ice to the top, gently stir to redistribute the crushed fruit evenly and add a splash of lemon soda to fill the glass. Garnish with mint sprig and grilled pineapple spear.

*Grill pineapple spears over medium flames, turning to get even grill marks on all sides. Remove from grill, and set aside to cool before using.

Spicy Mezcal Paloma
Distinctively smoky mezcal can be legally made anywhere in Mexico; though, in practice, it’s concentrated in eight of Mexico’s 31 states, and almost the entire category is produced in and around Oaxaca. With the craft of mezcal-making stretching back hundreds of years, artisanal producers still use recipes developed by their ancestors over many generations. The smoky profile comes from the agave hearts (piñas) being roasted in wood-fired earthen pits for many days before being mashed into pulp by stone wheels, fermented and distilled. One of Mexico’s classic tequila-grapefruit highballs, the Paloma, is an almost-perfect summer sipper with a great sweet-tart balance. Here, it gets a smoky kick from a generous dose of mezcal for the agave spirit and spice via jalapeño. The cocktail is delightful when served in a traditional salt-rimmed clay cantarito cup.

To prepare one drink: To a cocktail shaker, add jalapeño slices, agave and bitters; crush with a muddler. Add ice, mezcal, tequila and grapefruit juice; shake well. Rub the rim of a clay cantarito cup or double Old Fashioned glass with the cut side of a grapefruit, and dip it in coarse-grained salt to coat. Strain the drink into the cup over fresh ice. Garnish with grapefruit zest and a jalapeño wheel.

Smoke ’em if you’ve got ’em
Like wine or whiskey, a great cigar can have phenomenal depth and complexity of flavor. Unlike the cringe-inducing and admittedly subpar stogies I smoked in my 20s, selecting a cigar from the walk-in humidor at Beehive Cigars (1564 S. 300 West, 801-566-5178, BeehiveCigars.com) evokes the sultry drama of Havana nights and breezy Caribbean beaches. I asked cigar lover and Wine Academy of Utah sommelier Jim Santangelo (WineAcademyOfUtah.com) and Beehive Cigars’ shop manager Brandon Oveson to recommend some great smokes to enjoy while tending the grill or settling back with a drink on the porch come sundown.

One choice that Santangelo, Oveson and I all agree upon is the phenomenal bang for the buck you get from Beehive’s Maduro Torpedo house cigar. A long Dominican figurado shaped like a (you guessed it) torpedo, it’s wrapped with dark Maduro leaf. “This is a mellow smoke cigar with notes of dark chocolate, coffee, espresso and a sweet finish,” Santangelo says of this standout. “Pair up with a quality rye or bourbon whiskey or local IPA to really kick it up a notch.”

Oveson recommends a medium-strength yet complex cigar like La Galera Habano Churchill to accompany a rye Old Fashioned, saying, “It has notes of oak and cedar, subtle spice and a creamy sweetness throughout.” I also like this cigar with slightly bitter Campari cocktails like a Negroni or Boulevardier.

For a very savory, full-bodied cigar, Santangelo recommends the La Mission 1959 from L’Atelier to go with the spice of a barrel-strength rye or stout beer. Oveson also thinks this smoke is great with a bold Cabernet. “It’s very savory,” he says. “It’s like smoking a steak.” 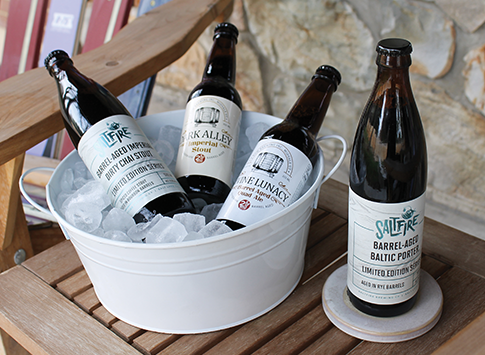 Utah barrel-aged brews
While much of the flavor of aged spirits like whiskey comes from the grain recipe and type of yeast used for fermentation, a huge part of what you taste and see in the final product comes from the fire-charred wood-barrel interior. Since American rye and bourbon barrels can only be used once, they’re repurposed to age Irish whiskey, rum, malt whiskeys and, yes, beer.

To get the lowdown on Utah barrel-aged brews, I asked Tim Haran, founder of Utah Beer News (UtahBeerNews.com) to suggest a couple of smoky additions to the backyard barbecue ice bin. Harran notes that barrel-aged projects are often limited release or seasonal offerings, but there are usually similar brews in the works: “The breweries are solid, so I wouldn’t have trouble recommending whatever else they come up with down the road.”
Dark and delectable

“2 Row Brewing is my go-to for hop-forward beers. But don’t sleep on the Midvale brewery when it comes to dark, delectable and complex barrel-aged offerings,” Haran says. Coming in at a hefty 11.5% ABV, Divine Lunacy is a bourbon-barreled Belgian quadruple rested in barrel for about nine months. Haran picks up rich caramel and toffee aromas, dark fruit flavors and a touch of vanilla in the profile. Also try 2 Row’s oak-aged Dark Alley Imperial Stout (at a whopping 15% ABV) with coffee and dark chocolate notes.