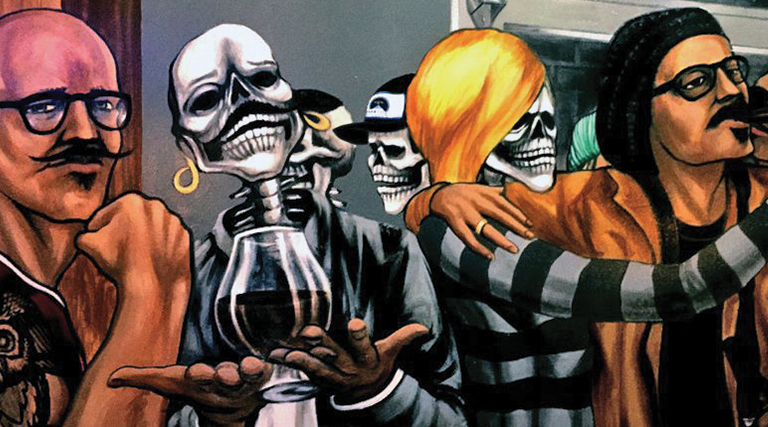 If you should find yourself in Purgatory, and by that we mean the hip bar/restaurant on the southern edge of downtown SLC, you might feel as if you’ve stepped into a trendy watering hole in Brooklyn, N.Y. Or Seattle or Portland, Ore.

In fact, Diamond Dang, the eatery’s co-owner/manager, along with her interior-designer aunt Mai Nguyen, went through months of exhausting “research,” visiting bars in all those locales, as well as in San Francisco and Hong Kong, to come up with the look and feel for Purgatory.

“I’d lived in Portland for four years and Seattle for seven, and there is some of that look here. But what I really wanted was someplace I would want to go to with my friends and feel comfortable,” says Dang. “We wanted it to be its own thing and different from other bars.”

Part of the local, family-owned Sapa Investment Group (owners of Sapa, Fat Fish, Bucket O’ Crawfish and more), Purgatory leans toward an industrial chic vibe with dark wood, brushed steel, concrete floors, and exposed electrical and mechanical conduits. A bar of rough-finished planks is contrasted by shelves of booze framed by an arched, antique-looking display cabinet behind the busy bartenders. Walls feature murals while roll-up garage doors allow in plenty of light year-round and, in summer, open onto an enclosed patio with more seating, fire pits and lawn games.

If Dang wanted a place to hang out in, chef Hiro Tagai shares similar ideas about the next-level bar food that he and his team turn out of the snug kitchen. Born in Japan but raised in Provo, Tagai served as head chef for Happy Sumo, did a stint with the upscale SLC eatery HSL and collaborated on pop-up events around the capital city. He had just finished a nearly yearlong intensive ramen cooking school outside Tokyo before coming to the Sapa group.

“I had some ideas for the food from living in Japan and working as a sushi chef, and then I just focused on price points and things I would want to eat if I were out at a bar,” says Tagai. “When we opened, we didn’t have anything on the menu over $10 and now we don’t have anything over $12. We want average people to be able afford to come and have some good food and a few drinks.”

In addition to delectable offerings for brunch, happy hour, taco Tuesdays and late night, Tagai looks to unique takes on comfort foods, such as the Curry Moco Loco, a panko-crusted hamburger patty with rice and a fried egg covered in a housemade curry sauce. “It’s one of my favorite things to eat,” says Tagai. As homage to a dish a bar crawler might throw together after a night out, Tagai created the Ghetto Ramen: kimchi-flavored instant ramen loaded up with braised pork, kimchi, a fried egg and green onions. “It’s like if you had instant ramen at home but then could add good stuff to it,” he says.
The K-Pop fries are also popular, Tagai says. A pile of french fries are topped with braised short-rib meat, kimchi, cheese, green onions, cilantro, pickled red onion, leeks and spicy Korean chili (gachu) mayo.

Dang says plans for the summer include live music on the patio and continuing to hone the specialty cocktails. “We give the bartenders a lot of freedom here to come up with new things,” says Dang. Tagai says he likes to make menu changes about every four to six months and will be adding lighter, healthier options for summer.