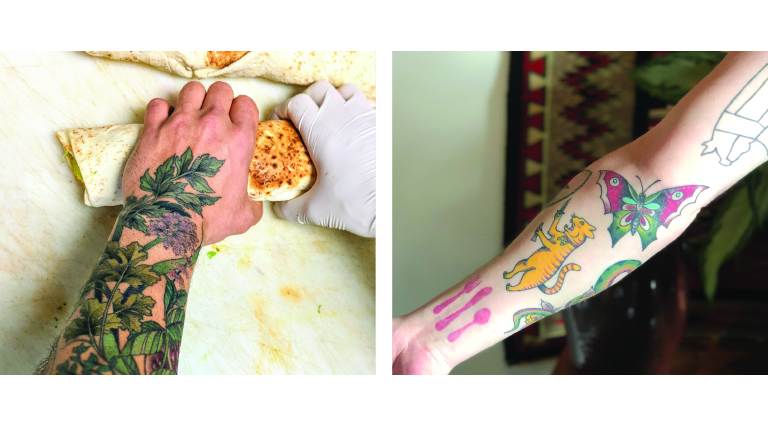 Theories on the proverbial tattooed chef

If a sailor, an ex-con and a chef walked into a bar, what would they discuss? Very possibly, tattoos. While people of many backgrounds get tattoos, some demographics are notorious for the ink their skin bears. The answer as to why a chef is more likely to get a tattoo than, say, a lawyer, is nebulous, yet theories abound. Here a few from local chefs.

And chefs have a lot of stories. From the revolving door of co-workers, apprenticeships for eccentric chefs abroad and accidents with the knife, cooks accrue as many stories as spices on their racks. “For me,” says chef Moudi Sbeity of Laziz Kitchen, “tattoos tell a story about me and my past.” Sbeity’s forearms are painted with his favorite ingredients, including parsley, thyme and garlic, as well as a pomegranate that pays homage to his native Lebanon. Sbeity fled home when he was 18 years old during the Lebanese-Israeli War in 2006. A decade later, he opened Laziz. In his case, tattoos are not just ornamental, but “tell something much deeper.”

“We might not be making paintings and sculptures, but we see ourselves as artistic people,” chef Justin Soelberg of Nomad Eatery says. For him, tattoos are a mode of self-expression, a way to stand out from the other cooks flipping burgers on the line. Soelberg’s eight tattoos began with a quote on his arm: “Those who cannot remember the past are doomed to repeat it.” While many chefs tattoo themselves with the logo of their first restaurant, Soelberg’s Nomad Eatery tattoo tribute is a cat named Ron Johnson—a nod to a former quirky, long-winded employee.

Anyone who’s worked in a kitchen knows it’s not for the weak of spirit, mind or body. Long hours on your feet, burn scars, continuous criticism—and that’s just the appetizer! So, as chef Jen Castle of Hell’s Backbone Grill suggests, perhaps a high pain tolerance is what predisposes cooks to tats. She got her first—a sun on her hip—at age 18 in a shop displaying a skeleton advising, “You better believe it hurts.” Now, she also has a recently revamped poppy arrangement to remind her of her (still living) grandma, and more botanical ink lies in her future.

A correlation rooted in rebellion

Look no further than the late Anthony Bourdain—who memorialized his culinary world travels with ink (“They’re very personal statements,” he said, “even the silly ones”)— for the lawless chef archetype. This cliché might exist due to the requisite hours of the job. Unless you’re running a breakfast joint, you’re lucky if you’re off before midnight. Night owls are often typecast as drinkers, smokers and creative geniuses—in other words, the sorts of people already likely to get tattoos. Perhaps staying up late also intersects with impulsivity, which Soelberg says explains the tattoo of utensils on his wrist. Next up for him? A cheesy slice of pizza, which he’ll place beneath a tattoo of his mom dressed as a cowgirl. All we can say is that it takes a brilliant chef to devise a pairing like that.