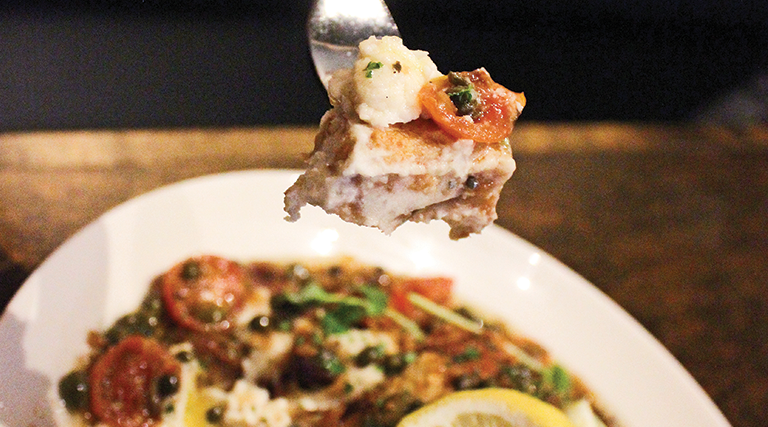 Chefs on the conscious edge

Photos and story by Cait Lee and Mika Lee

Vegan food. Admit it, when we hear the “V” word, some of us lose our appetites. Why does vegan cuisine get such a bad rap? Maybe because vegetables have so often been the lowlights of meat-centric meals—whether they’re served steamed, salted or drenched in a heavy sauce.

But the modern American diet is shifting. More than ever, people care about where their food comes from and its impact on the environment. They care about what they put into their bodies.
Eating a plant-based diet doesn’t have to be an all-or-nothing proposition but rather a way of life.
And thanks to the culinary artists like those appearing on the following pages, there are now any number of techniques and methods designed to give veggies the richness, texture and creaminess they deserve. In fact, veggies are frequently becoming the star of the show.

So romaine calm and carrot on, conscious consumer. Vegans enjoy “cheese boards.” They indulge in dessert. They savor a classic “burger.” Lettuce give vegan cuisine a chance!

Seasons Plant Based Bistro co-owners James MacDonald and Jessica Vance are bringing vegan fine dining to Utah. Offering a decadent French and Italian experience, they take on the challenges of molecular gastronomy in their test kitchen by challenging vegan norms. The secret to their success is paying attention to details while providing consistent, delicious food and service to their customers.

Crudite board: A play off of the charcuterie board, this vegan cheese board highlights soft and creamy fromage blanc and Seasons’ 2-month-aged Parmesan. Plated with house-pickled veggies and a smooth blueberry compote, any combination will surely take your taste buds for a ride.

Tofu Veracruz: Crispy, firm, soft, smooth. All these textures come together to make this crusted tofu dish complete. Served on a bed of whipped garlic mashed potatoes and olive-caper Veracruz, topped with a scoop of housemade butter.

Passion Flour Patisserie owner Jessica Davies was the first to open a pastry shop in Utah four years ago using only organic, local and ethically sourced products. Her French pastry-school training helped her create a menu for Passion Flour, an inclusive space for vegans and nonvegans. The biggest challenge has been thinking outside of the box for butter and milk to get the same textures while balancing the flavors of French pastries and desserts, such as croissants, macarons and cakes.

Mixed berry crêpes: This decadent dessert is made with a secret crêpe batter, filled with Cocowhip and mixed berries, and then drizzled with housemade chocolate syrup. You won’t believe it’s all plant-based.

Avocado toast: Served on a walnut wheat bread, this millennial favorite is spread with avocado and topped with cucumbers, pumpkin seeds and a blend of seasonings. It’s complemented by a house salad with a maple-glaze vinaigrette.

Boltcutter’s co-owners Roxy Carlson and Alex Jamison are giving downtowners an exciting option for vegan Mexican food and drinks. Boltcutter’s loyal customers, both vegan and omnivorous, rave about the Central American cuisine and the eatery’s mission to normalize veganism. Boltcutter—named after an animal-liberation tool—also symbolizes cutting through closed minds about vegan dining.

Carne asada tostadas: The protein behind this dish is actually jackfruit! It’s plated on a crispy tostada with dairy-free sour cream and fresh veggies. Try it with their shaken, not stirred, pisco sour.

Sin carne burrito: This enormous burrito will leave you feeling full and happy. Crafted with housemade carne asada seitan, guacamole, refried beans and salsa, it pairs well with a Mezcal Old Fashioned made fresh at the bar.

Nachos: Boltcutter might have the most realistic, non-dairy nacho cheese sauce you’ll ever taste. The secret? Cashews and brown rice. They’re topped with a flavorful jackfruit barbacoa and vegan sour cream. Wash down the meal with a housemade horchata.

Piper Down owner Dave Morris has been on the vegan scene longer than most. The pub’s menu has evolved to include an entire vegan and brunch menu. Growing up eating a variety of eclectic cuisines, including Mexican and English, Morris is now using meat substitutes. His health has improved since going vegan, all without giving up his favorite comfort foods. His goal is to make people happy by creating a positive, conscious relationship with food.

Bangers and mash: The Beyond Meat sausage has an uncanny resemblance to real meat and has just as much protein. Placed atop hand-mashed potatoes and housemade Guinness mustard, no meat-eater would be able to tell the difference.

Corned beef and cabbage: A signature entree at Piper Down, it’s made with slices of Herbivorous Butcher corned beef, stewed cabbage, carrots and potatoes. The dish is always delicious with a beer from the bar.

Vegan cowboy burger: This burger is made with your choice of plant-based patty, smothered with a signature BBQ sauce, and topped with hickory-smoked “bacon,” vegan cheese and an onion ring. What’s not to love?

Mika and Cait Lee are food writers known for food binging, test kitchens and food photography. Their adventurous palates have taken them around the world.
@crazyfullasians