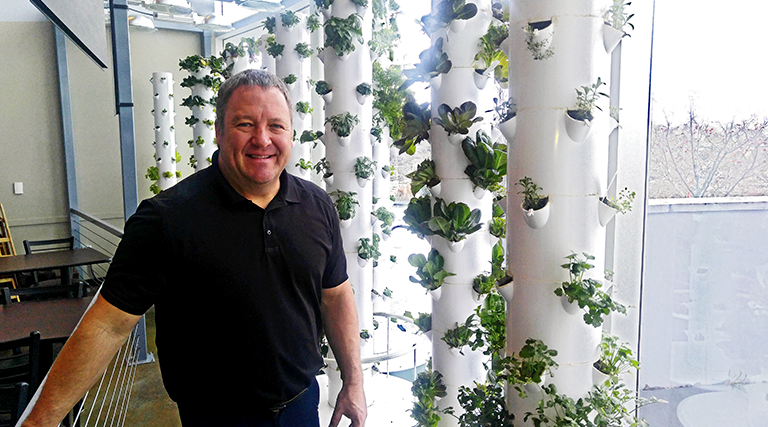 Let’s face it: Farming’s an occupation where you wouldn’t expect to find nerds. Sure, new tractors have GPS, computers can help work out planting schedules and getting the right fertilizer requires some chemistry, but really, when we talk about farming, most of us think overalls and a straw hat—not a lab coat and pocket protector.

But that’s only because we picture traditional farming and not the farms of the future. There are those among us who are not waiting until we colonize Mars to start trying new methods of growing food. The desire for fresher and more local food products has pushed more than a few chefs around the state to plant gardens alongside their restaurants. But there are also some who are looking beyond raised beds or planter boxes and are pushing into extreme nerd territory.

Tower to Table: Loveland Living Planet’s forest of green
The sound of trickling water in the Reef Café inside the Loveland Living Planet Aquarium isn’t some ambient, new-age background music. That’s the sound of a future visitor’s salad being fed. More precisely, the sound is actual water (fortified with plant food) falling down inside the 10 tower gardens that line the south-facing windows of the café.

“These were created to be a method of urban farming where there is no green space. You can have these on a roof or balcony. It is a way to have a lot of plants in a small space and no need for soil,” says chef Dave Prows, a partner in Icon Culinary, which operates the café and caters special events at the aquarium.

The towers were developed in the early 1990s by engineer Tim Blank as part of his work with Epcot Center at Disney World and as a liaison between Disney, NASA and the U.S. Department of Energy.

Prows sees them as a way to deliver sustainable, organic produce year-round for his kitchen at the aquarium. The sustainable and science-oriented qualities of the towers also fit with the environmental and educational mission of the aquarium, Prows said.

“Kids come and look at them and ask questions,” Prows said. “If they have a salad or stir-fry, I can tell them what they are eating came from right here.”

With 44 planting spaces or “cups” per tower, Prows grows a fairly wide variety of produce ranging from herbs to peppery, spicy wasabi arugula, red chard, peppers and even strawberries—all grown without pesticides.

“If you are doing hydroponics, if something contaminates your water you have to start over or—if you have a sick plant—it can spread to the others,” Prows said. “Here, the water is refreshed each time. If I get a sick plant, I just take it out and put in another. We have deionized water here that has been through reverse osmosis, and all we have to do is maintain the pH and add the nutrients to the water.”

Prows said some day he would like to have an entire “farm” of the towers to provide fresh, sustainable, organic produce to other restaurants.

BBQ With a Side of Fresh Produce: Pat’s BBQ’s hydroponic garden of delight
Fresh, organic produce is probably not what most people have in mind when walking into a barbeque restaurant, but, Pat Barber, owner of Pat’s Barbeque in South Salt Lake, wants that to change. Diners who stepped out onto the south patio at Pat’s in the summer of 2018 would have found themselves in a jungle of tomato vines sprouting from rows of plants in 5-gallon buckets.

“It started with a garden at my house after my wife passed away four years ago. Gardening was a way for me to find some peace and work some things out,” Barber said. “As I got into it, I found I needed more information, so I took a Master Gardeners class from Utah State University. There were some people there talking

about hydroponics and aquaponics, and I thought it was something I wanted to try

out for the restaurant. People have this idea that eating at a barbeque joint is unhealthy. I believe in moderation, and I want to surprise people and show them they can have great, fresh things at a barbeque place, too.”

Barber utilized two hydroponic systems to grow produce at his restaurant. His tomatoes were grown using a Dutch bucket system in which 5-gallon containers were filled with a gravel-like growing medium and suspended over a water reservoir. Water would flow in the top and—after reaching a certain point—would drain out through a pipe. The water would be captured and circulated to the next bucket and eventually return to a reservoir that’s replenished regularly. The system uses less water and soil than conventional growing methods.
Barber also built two 16-by-4 feet water tables that hold water and nutrients. Holes are cut into a sheet of polystyrene foam that floats on top of the water, and the

plants are placed in the holes with the roots suspended in the water. Barber grew spinach, lettuce and other greens on the water tables along with peppers and tomatillos in the buckets. All the produce was used at the restaurant.

This year, Barber has plans to move things to another level and venture into aquaponics. Aquaponic systems combine farming of fish and plants. Plants are suspended in a tank of water and receive nutrients from the waste produced by the fish. It is intended to be a self-sustaining and low maintenance system, and, for Barber, it’s another addition to the menu. “Serving catfish from the tanks with vegetables we’ve grown here? I can’t wait!” he says.

Barber said he plans to grow hops on the patio this summer and says that he is working with a local brewery to turn them into beer. “Years ago, I used to homebrew,” he says, “and I still have all my recipes, so we’re going to see what we can do.”

Waste Not: Houweling’s greenhouse tomatoes
There is plenty of traditional agriculture on view throughout central Utah. Fields of alfalfa, onions, barley, wheat, fruit orchards and pastures of grazing livestock stretch out from small towns and dominate the landscape. But it wasn’t the wide-open spaces and fertile ground that drew the attention of the Canada-based Houweling’s Tomatoes produce company.

Specializing in hydroponic greenhouse-grown produce such as tomatoes and cucumbers, the folks at Houweling’s were drawn to the Currant Creek natural-gas power plant in Mona, Utah—about 75 miles south of Salt Lake City—which produces electricity for nearly a quarter of a million homes. In addition, it also produces excess heat, steam and carbon dioxide, which tomatoes thrive upon.

In 2011, the company began talking with Rocky Mountain Power about tapping into one of the exhaust stacks at the plant. In 2014, the company purchased 28 acres of ground next to the plant and began constructing a massive greenhouse. In summer 2015, a 475-foot-long pipeline that is 10 feet in diameter was connected from the power plant’s exhaust stack to the greenhouse. The operation produced its first crop by the end of the same year.

In addition to the heat and CO2, the steam is condensed and used to water the hundreds of tomato vines growing in a medium made from shredded coconut husks. Beehives inside the greenhouse provide pollinators for the plants that produce around 27 million pounds of tomatoes a year.

With the success of the project, Houwelings announced plans last year to expand the operation.
Houwelings tomatoes can be found in stores all around the state and bear the “Utah’s Own” label.