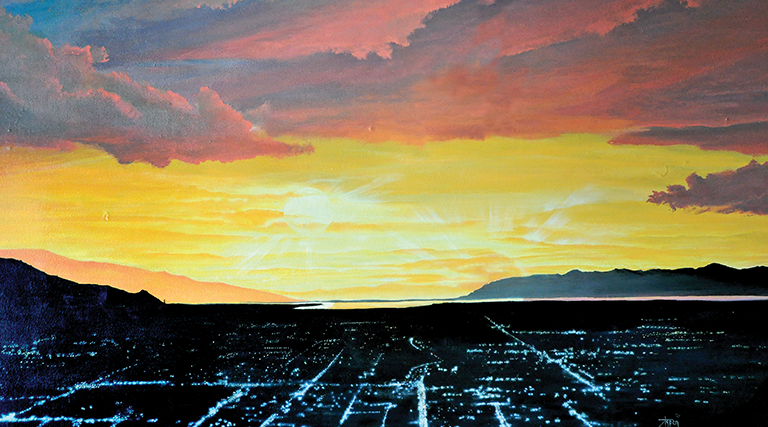 A short time ago, in a neighborhood very close by, Daniel Cantu’s career as a culinary Jedi led him to open Sugarhouse’s Twin Suns Café. A veteran of the catering business, Cantu’s decision to integrate his affection for Star Wars with his talent for whipping up quality, health-conscious food was instantaneous. While he was developing his talents as a chef, he was also accumulating a serious collection of Star Wars memorabilia, most of which can be seen adorning the walls of this modestly sized diner. The café itself takes its name from Luke Skywalker’s home planet of Tatooine, which orbits under the angry gaze of two solar bodies.

While the décor at Twin Suns is reason enough to visit, Cantu has created a

menu of dishes that reference a multitude of sci-fi films. The Nerf Burger, for example, is made from a mixture of ground pork, beef and lamb, but takes its name from an intergalactic beast of burden—a herder of which is considered one of the franchise’s sickest of burns. The combination of meats ensures a pleasantly juicy burger, and the almond tomato sauce—one of Cantu’s many homemade condiments—complements the dish nicely. All of the restaurant’s entrees can be ordered with a choice of fries, salad or fresh fruit, which is a nice touch for those looking for a more well-balanced meal—or, in my case, those looking for an excuse to order dessert.

Speaking of the dark side of the menu, Whatawook Bars arrive like chocolatey slabs of carbonite layered with peanut butter and chopped pretzels. The spiced chocolate layer is thick and moderately flavored while the peanut butter creates a salty counterpoint to the taste and texture. It’s a delicious mix of sweet and salty flavors, and it’s rich enough to sustain any diner for a trip to a galaxy far, far away.