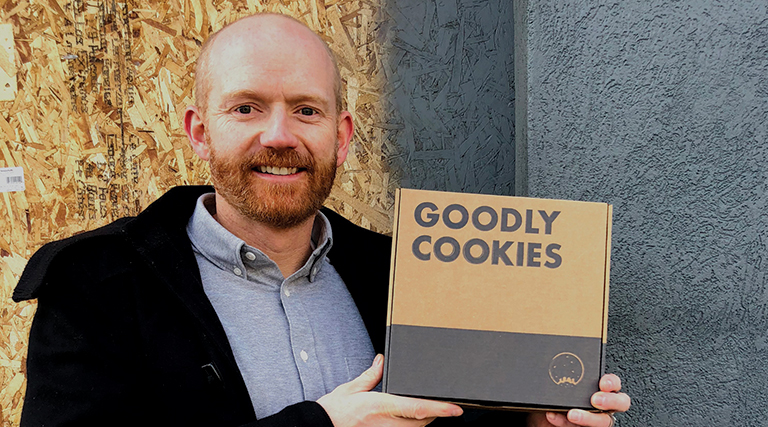 When Brandon Plewe and his college roommate, Clay Rockwood, attended the University of Utah in the early aughts, they lamented the lack of available treats after 9 p.m. But nothing came of the idea—immediately, anyway.

Fast forward to 2008, when Plewe was diagnosed with cancer. The experience triggered a revelation: “I wanted to be a part of something that I’m proud of and gives back.” That something turned out to be his dorm-room dream. After he recovered, Plewe joined Rockwood in tinkering with recipes for chewy-on-the-outside, gooey-on-the-in chocolate-chip cookies. Their quest was simple yet sublime: “The best cookie you’ve ever had,” as Plewe puts it. In July 2017, Goodly officially began selling and delivering cookies throughout the Salt Lake area until 11 p.m. on weekdays and 1 a.m. on weekends.

In addition to referencing quality, the name Goodly also nods to a larger mission. One percent of every cookie sale is donated to the Huntsman Cancer Institute, where Brandon is also a fundraiser by day. And, at the night’s end, Goodly delivers extra unsold cookies to hospitals throughout Salt Lake.

The Big CinnaJon is a recent addition to the Goodly lineup. The cookie pays tribute to Huntsman Institute founder Jon Huntsman Sr., who passed away in 2018. “Jon would come through the cafeteria and break off pieces of cookies, so you’d know when he’d been through,” remembers Plewe.

Huntsman’s favorite was the snickerdoodle, which Goodly makes “next-level” with its own housemade cinnamon chips—precious shards of concentrated cinnamon flavor. The other Goodly twist on the snickerdoodle is its signature height; some Goodly cookies tower as tall as 2 inches at center. These feats of cookie engineering are achieved through perfected flour-sugar-butter ratios, dough refrigeration, and other sworn secrets. Given their epic proportions, Plewe advises that Goodly cookies be shared—and enjoyed with a glass of milk.

In February, Goodly moved from its temporary location at Amour Café, to its own shop west of the U campus, where its story began. After one bite of the Big CinnaJon, it’s impossible to disagree with Plewe’s exuberant observation: “This is an awesome time to be alive in Utah if you love cookies.”