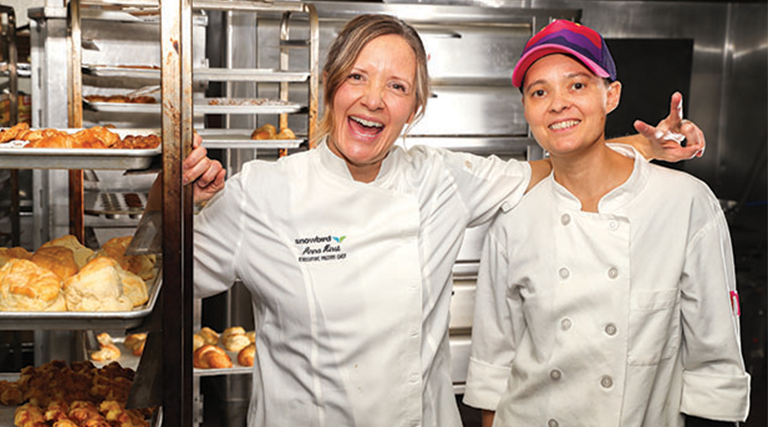 The Snowbird pastry team takes baking to the extreme

But what about the baking skills required to consistently produce five-star results under some of the most challenging baking conditions in the food-service industry? At Utah’s mountain resorts, teams create pastry perfection even with a trifecta of challenges that include high elevation, low humidity and transportation of delicate baked goods around the mountain in all kinds of weather.

The Snowbird pastry team met with Devour to give readers the lowdown on how they deal with these extreme scenarios.

“There’s no time to play around,” Snowbird’s executive pastry chef Anna Hirst says. Her team creates elaborate cakes and desserts at high altitude and moves them from the main pastry kitchen in the basement of the Cliff Lodge via the aerial tram to The Summit lodge atop Hidden Peak (at 11,000 feet). Having worked at Snowbird going on a dozen years, she’s seen it all. “So many things can go wrong, and it happens quickly,” says Hirst. “There’s no room to go back and do it again.” Air bubbles distort rolled fondant due to quick elevation gains, so they prepare all of the cake components individually and then assemble the desserts at the summit. Cakes expand and crack with increased altitude, and ice cream bubbles up more than an inch over the top of the bucket. And that’s just the elevation factor at work, says pastry assistant Sara McGinnis. “Sometimes, an afternoon thunderstorm will come out of nowhere” as they are preparing for a big catered event, McGinnis says. “The moisture gets in everything. It can be a mess if you’re not careful.”

Every day, starting before 5 a.m., Hirst’s team—consisting of a sous pastry chef and four full-time bakers—make every baked or sweet item that’s served on the mountain from scratch. From The Atrium’s famous gooey cinnamon rolls to elaborate cakes, molded chocolates and fanciful petit fours made to order for receptions at The Summit, they do it all.

As a year-round resort, the crew doesn’t have an off-season. But their busiest time of year is during Oktoberfest, when the team provides baked goods for the main tent and staffs the popular Belgian waffle stand. During the 10-week festival, they make 275 German chocolate cakes, 125 Black Forest cakes, and up to 500 apple strudels, using more than 700 pounds of butter and more than 5,000 eggs.

In 2018, they sold 2,400 Belgian waffles in one weekend of the festival. “It can get nuts,” Hirst says. “Some days, everything’s melting because of the heat, and the next weekend, we’ll be trying to get our carts through a foot of snow.”

Even getting their baked treats loaded onto the platform can be sketchy in winter. “Sometimes, we’re sliding everywhere” while walking the pastry carts to the tram base, says Hirst. “And there are usually people gawking at us from the chairlift” as the team transports their towering carts on the elevated bridge over Chickadee, which, up until last season, they had to navigate on snow by foot. “We’d just cross our fingers some out-of-control skier wouldn’t wipe out and slide right into us,” Hirst says.

But the perks are pretty posh, too. The pastry kitchen has a back door that leads right out onto Chickadee, and employees keep a path shoveled so they can take a few ski runs during their lunch break or after their shifts are done.

During the winter season, snowcats bring pastries to Snowbird’s mid-mountain Mid-Gad Restaurant. Meanwhile, tram rides to The Summit can be far from a smooth ride. Hirst recalls a particularly rough day when she’d delivered desserts to The Summit for an early-morning event, but the tram was shut down immediately after due to high winds. “The Mountain Ops team was super cool and sent a snowcat up for me,” because she needed to be at an event at The Cliff Lodge. “It was a crazy ride down, as you never really realize how steep Snowbird is until you are staring out the front window of the snowcat, and there is no hill to look at,” because of the steep pitch. She now brings her skis along with her deliveries as a precautionary measure.

As the pastry crews at Snowbird and other mountain resorts are often the first to open the kitchens each day, the commute to work itself can be perilous. “The moose up here are pretty friendly,” Hirst says, “but you never want to mess with them.” Snowbird staff regularly sees the huge ungulates wandering on the slopes or in the employee parking lot early in the morning. As McGinnis is often the first baker clocked in before 4 a.m., her drive up Little Cottonwood Canyon can be filled with hazards. She’s on her way to work before the roads are cleared, and she frequently slows for moose, deer, bobcats and mountain lions. “Even with the challenges we have baking at altitude, sometimes, it seems like my commute is the most extreme thing I do,” McGinnis says with a laugh.

Something to keep in mind (along with some thanks) the next time you are biting into a brownie at the Mid-Gad Restaurant.