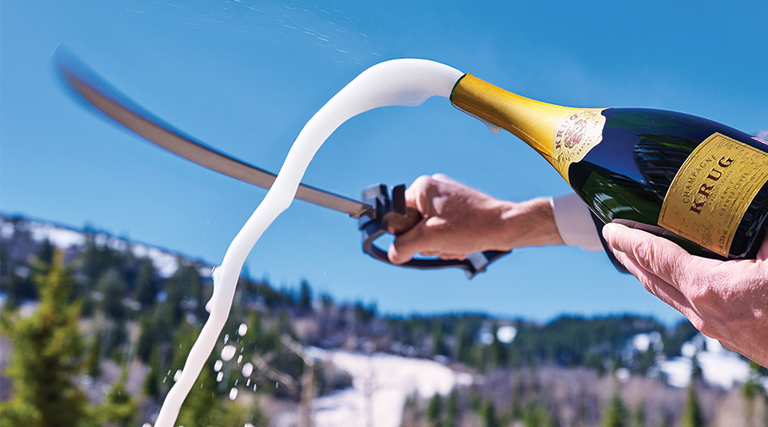 The Champagne sabering at Park City’s
St. Regis Hotel is the top pop of any ski vacation

All my out-of-town visitors arrive with one overriding interest: a trip to Park City. Accommodating them over the years has resulted in a standardized, half-day itinerary. It begins with a drive-about of “No Place to Park City.” Then, once car free, an amble up and down Main Street, including a respectful pause at the Banksy art and Cow’s ice cream shop. The setting sun ends the tour on the Mountain Terrace of the Deer Valley St. Regis Hotel for a glass of wine and the sabrage ritual.

(Pardon my French!) Sabrage translates to “the ceremonial opening of a bottle of Champagne with a saber.” In other words, whacking off the top of a Champagne bottle with a sword as people watch. Or “sabering” for those who are more comfortable with English verbing.

Sabering Champagne bottles is a French tradition dating to the early 19th century. Its provenance is traceable to the Champagne House Veuve Clicquot Ponsardin in Reims (which is still in business and was designated a UNESCO World Heritage Site in 2015.) As the story goes, its owner—a 27-year-old widow—often entertained Napoleon’s cavalry officers into the wee hours. Taking to horse, they sought to impress her by sabering a bottle of her sparkling wine as they rode off.

A century later, in the day of John Jacob Astor IV, the St. Regis Hotel in New York City augmented its afternoon tea ritual with sabrage. Nowadays, more than 60 St. Regis properties around the world saber Champagne bottles at the end of each day.

Saber, the noun, is a bit of a mischaracterization, I think. If you scan the selection of custom Champagne sabers offered on Amazon.com, you’ll find they are more artsy, blunt-edged tools than honed-blade weapons—scaled down cutlasses evoking pirates not cavalry. The truth of the matter is that the bottle can be opened with a backhand stroke of a spatula or butter knife (or iPhone as a YouTube video demonstrates.) A Champagne bottle’s Achilles Heel is the intersection of the seam and the lip at the top of the neck. Strike it at the right angle and the resulting fracture causes the pressurized wine to blow off the corked top in a rooster tail of wine, froth and shards of glass.

It is a fine spectacle, especially at Deer Valley in the twilight, against the backdrop of Wasatch Mountains. From atop a boulder on the terrace, a bartender recounts the history of sabrage, and then 1-2-3-pop! the bottle is open in a flash of steel. It’s quick! But my visitors enjoy it and the Champagne that follows. What distinguishes it from other Salt Lake City spectacles—the Sunday morning broadcasts of the Tabernacle Choir, for instance—is the funicular that delivers spectator to spectacle: Two, glass-walled tram cars glide up and down the mountainside with a pneumatic purr. In this jaded tour guide’s view, however, the funicular is only slightly more attractive than the easy parking in the Deer Valley lot.