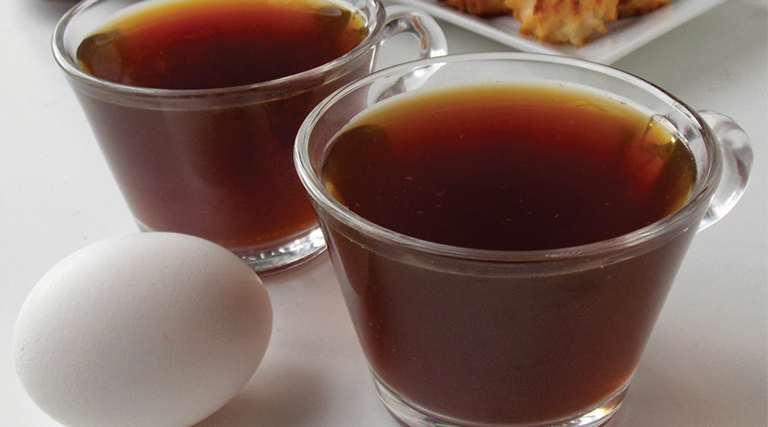 Crack an egg to remove bitterness and clarify your coffee

My mother learned to make egg coffee in her 20s, willy-nilly. Back in the day, it was the beverage of choice in the dining rooms and parlors of “Little Denmark” in Sanpete County,120 miles south of Salt Lake City. Moving to Ephraim at the end of World War II, she was invited to join the women’s clubs that met on weekday afternoons. Some had a literary focus; others were devoted to bridge. When the local Mormon elders put the kibosh on games using standard playing cards, the women turned to Rook, a 57-card game free of venal association. Drinking coffee was never much of an issue for Sanpete Mormons.

Club members took turns hosting the meetings. When my mother’s turn came around, Aunt Stena arrived—early and unbidden—to make egg coffee in a stove-top pot. Stena, born in 1877 to Danish immigrants, had rheumy eyes and skin the color of sun-bleached muslin. She favored dark dresses with a cameo brooch at the neckline. Widowed in her 50s, she made her way as a freelance housekeeper. If you invited her to Thanksgiving dinner, she soon found an apron and a space at the kitchen counter. She often baked rolls and diverted impatient children with butter-and-sugar sandwiches.

My memory of those home-cooked Thanksgiving dinners is sketchy, but I now realize that “home cooking” depended on someone at home—cooking—usually beginning at dawn. In my family, it was mothers and grandmothers. As they baked, boiled and basted, they also attended to a matrilineal rite whereby young girls learned the secrets of white sauce, pickled beets and egg coffee. The men’s role was laughable. At the last moment, the gravy boated, they were given a big knife as if a Y chromosome had imbued the know-how to carve meat from a turkey carcass.

Men are still trusted with carving knives, but egg coffee has been all but lost in the quest for a better-faster cup of coffee that has brought us the Keurig pod. By the time I was spooning Folgers into my first Mr. Coffee machine in the 1970s, egg coffee was just another family story—like the jug of homemade root beer that exploded one night. Then, a few years ago, while leafing through a 1931 edition of Household Searchlight Recipe Book, I came upon these directions for egg coffee: “Rinse coffeepot with boiling water. Measure coffee into pot, allowing one tablespoon coffee for each cup of water. Combine coffee with slightly beaten egg, using one egg for each eight tablespoons of coffee. Pour measured amount of freshly boiled water over coffee and egg. Heat to boiling. Boil three minutes. Strain and serve at once.”

I tried it—without matriarchal assistance. Pouring hot water on the egg-congealed grounds, I felt the twinge of doubt my mother must have experienced the first time she watched Stena at work. My resulting, amber-hued coffee was certainly drinkable but thin for my taste. I’m sure Stena would say: Next time use less water.