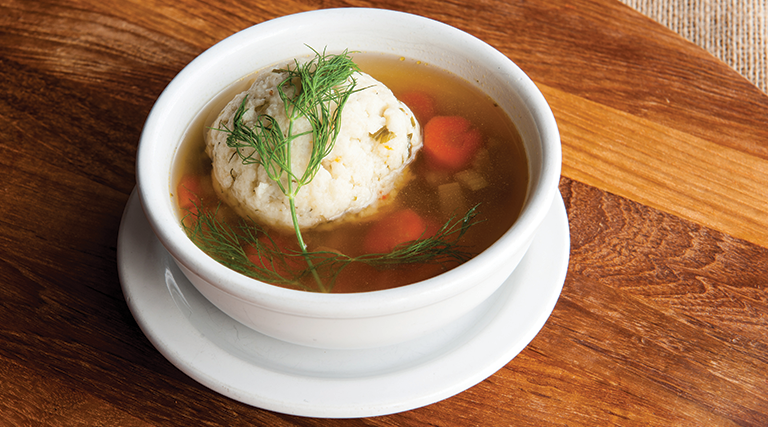 So, what’s with those soup balls?

The story goes that one day, President George W. Bush went out to dinner with a Jewish friend, and the friend recommended a kosher place nearby. They arrived, and W’s friend ordered them both the house specialty: matzo ball soup. The waiter brought the bowls, and W looked at the soup suspiciously. His friend urged him to try at least one taste. So, he took a bite of matzo ball and slurped some soup and clearly liked it.

After W was finished he said, “Mmm mmm, that was good! But tell me, do you Jewish folks eat other parts of the matzo, or just the balls?”

So just what’s with those balls? Matzo balls—or kneydlekh in Yiddish—are Ashkenazi (eastern European) Jewish soup dumplings made from a mixture of matzo meal (ground matzo), eggs, water, dill, other spices and a fat, such as oil, margarine or chicken fat (schmaltz). Most Jewish cooks prefer schmaltz to any other fat. Matzo balls are traditionally served in chicken soup and are a staple food on the Jewish holiday of Passover.

The texture of matzo balls may be light or dense, depending on the recipe and the skill of the cook. At the deli, we call them “floaters” or “sinkers.”
Schmaltz imparts a distinctive flavor and is credited with some of the healing properties of chicken soup. The proteins found in the fat are said to stimulate the immune system to help ward off colds and flus.

After the matzo balls are formed, they are dropped into a pot of salted boiling water or chicken soup, then the heat is turned down to a simmer and a lid is placed on the pot. The balls swell during the cooking time of 20 to 30 minutes. From a golf-ball-sized beginning, they can swell to the size of a baseball if made properly.

So, it’s lunchtime and 70-year-old Lou walks into Feldman’s Deli, where he always goes for his daily bowl of matzo ball soup. As usual, Lou sits down at his table and smiles at Gavin, his regular waiter. Almost immediately, a bowl of soup is placed in front of Lou. As Gavin walks away, Lou quickly calls him back to his table. “Please taste this soup,” Lou says to Gavin. “Why?” Gavin asks. “What’s the matter with the soup? It’s the same soup as you always have.”

“All right, if you insist,” Gavin says, looking around the table. “But where’s the spoon?”
“Ah-ha!” shouts Lou with a big smile on his face.