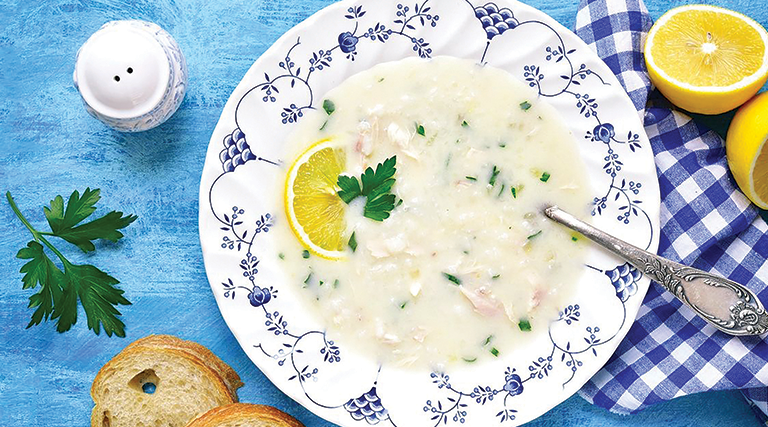 How veggies achieve immortality as soup

My dad was raised in Lead Mine, a now-vanished mining town in Bingham Canyon. His parents, Pete Saltas and Stella Nepolis Saltas, were children of Greek immigrants (actually, the mother of my grandmother, Stella, was a Mormon pioneer). They were brought up on the mentality of “waste not, want not.” If something was broken, they fixed it. Hand-me-down clothes and pants with patches or authentic holes and rips were the norm—and food was never wasted.

It’s said that Americans throw out 150,000 tons of food each day, most of it fruit and vegetable produce. My grandparents never threw out produce because they would make it into a vegetable broth or a fruit dessert before it went bad.

One of the most satisfying soups that uses a bit of this and that is a simple vegetable soup. My papou (grandfather) Pete would make it regularly using vegetables he found in the kitchen. Some call this the “kitchen-sink soup” because everything and anything goes in (except the kitchen sink).

To make this soúpa, just keeping adding veggies to create layers of flavors. The trick is to simmer the soup low and slow so flavors blend together. A Greek cook might call this process pantremeni, which means “to be married.” Start with tougher root vegetables such as carrots and celery and then add those that take less time to cook such as cabbage, spinach and onions. For the broth, use a combination of vegetable stock, olive oil and water. Make sure your vegetables are always covered. For extra zest, add some splashes of spicy V8 juice to the mix. Season with salt, pepper and plenty of oregano. Cook until the vegetables are tender, and you’re satisfied with the taste. And remember, soup always tastes better the next day.

In some cultures, soup is considered a starter to a meal, but Greeks are known to serve soup as a main course. In fact, soup is central to Greek cuisine and enjoyed year-round. When Greeks are fasting from meat and dairy, they fuel up on a soup called fakes (pronounced fah-kess). It’s a nutritional powerhouse comprised of lentils, vegetables and extra virgin olive oil. Once ladled into the bowl, my dad would drizzle red wine vinegar on top. In the frigid winter months, my mom makes batches of avgolemono, the delicious egg (avgo) and lemon (lemono) broth that’s added to hot chicken or vegetable stock with rice or orzo. Not only does it taste like the ultimate comfort food, it’s a popular cure-all that will nip any cold in the butt.

For Greeks, there is a soup for every occasion, and each is hearty, healthy and made with humble ingredients. You’ll always find a loaf of warm bread on the dinner table to ensure not even a drop is wasted.

So, look around your kitchen on a regular basis. Check the produce bins in your fridge and give all your veggies a good squeeze. If any are on the verge of spoiling, just slice and dice them. Add them to boiling water with oil and salt, then simmer and use for either stock or soup. The only ingredient required is some imagination.