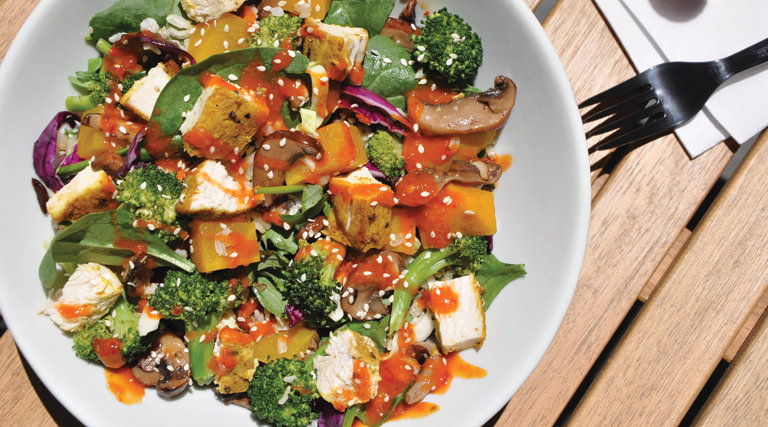 Salad bars worth a nibble

Who doesn’t get a little thrill when they see a well-appointed salad bar? Some spreads are simply a convenience saving us from having to wash and peel and chop. Others are more inspired—not only with what they offer, but in their presentation and how they keep it clean and tidy (because when it comes to salad bars, cleanliness is truly next to godliness).

After perusing your options, you stand there, with a chilled plate or paper carton in hand, and allow the colors of produce to lead you down the line while you debate what to put on your plate: some of this, none of that, a lot of this, a dab of that. It’s always revealing to see what people assemble on their plates (under the guise of it being rabbit food or health food).

You gotta love the sneeze guard, another genius invention of modern life. Salad bars should probably come with a “kid” guard—because if you watch pre-teens closely at the salad bar, you’re likely to never eat at one again. Ever wonder who dropped the olives into the salad dressing? Or left the spoon from the three-bean salad in the carrot and raisin bowl? Well, OK, it could be any one of us.

And that’s the problem with salad bars. Even sneeze guards can’t protect us from ourselves.

A number of restaurants (such as Café Zupas) are going the route of assembling your freshly made salad while you wait (and watch). It makes sense, since so many of us tend to overdo it at salad bars and combine ingredients that have no business being on a plate together.

Luckily, we have many choices in greater Salt Lake, from grocery-store salad bars to gourmet fine-dining buffets. Here are a few spots where the rabbit food is truly worth hopping for.

Rodizio Grill Brazilian Steakhouse
Yes, it’s a chain, and the meat might come out on swords, but the Brazilian salad bar is no gimmick. It’s fresh and eye-popping, with more than 30 salads made from scratch daily. “Most of the recipes are from the owner’s family and our executive chef,” says Nick Clayton, general manager at the Trolley Square location. Most popular is the Rodizio BLT salad made with bacon, tomatoes, housemade dressing and Brazilian aoli. The pineapple and coconut salad is “almost like a slaw, with glazed pineapple, toasted coconut and homemade sweet dressing within a cabbage base,” Clayton says. Housemade mayonnaise complements the potato salad that also features carrots and hardboiled eggs. Brazilian delicacies such as marinated quail eggs and hearts of palm enhance the experience. Along with signature salads, their salad bar offers fresh fruits, veggies, cheese and cured meats. “Add the bread, bananas and polentas for a complete salad experience. We may not be the biggest salad bar, but we are the most unique,” Clayton says. “And our options are 99 percent gluten-free.”

Bagels and Greens
Downtowners need salad bars, too! After living in Manhattan and New Jersey, Robb Abrams felt that his new home, Salt Lake City, was missing an essential entrée—the chopped salad. It’s “a hearty meal as well as a healthy alternative to what is usually available downtown,” he says. His six signature salads are assembled while you wait and served in a deep plastic bowl to make the trip back to the office less messy. The Far East salad ($9.50) features mushrooms, pickled gold beets, sesame seeds, shredded cabbage rice, baby spinach and baby kale, with either roasted tofu or curried chicken as a protein option while the Mediterranean ($9) includes cucumbers, tomatoes, broccoli, pickled onions, olives, couscous, baby arugula and baby romaine, topped with a zucchini-dill dressing. For protein, choose between falafel or one of three types of chicken—herbed, lemon or curry. There’s also a make-your-own option where diners can select greens, two vegetables, a fruit, a topping and dressing, such as the sweet chile vinaigrette made in-house. Complete your meal with a delicious and authentic New York bagel (that’s boiled before it is baked), another creation Abrams pioneered in SLC with his well-known Bagel Project. 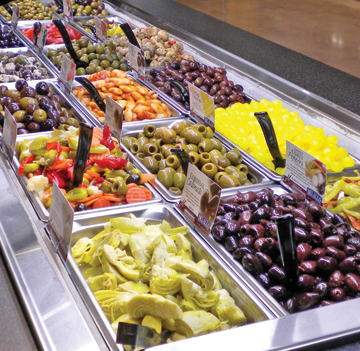 Harmons Delis
Harmons might be a grocery store, but its salad bar patrons don’t care. It could be because of Harmons unique ingredients ranging from the ocean-farmed Verlasso salmon and wild Gulf shrimp to the ciliegine fresh mozzarella and delicately flavored watermelon radishes. Or it could be because everything is made fresh daily.

“Pickled Brussels sprouts, miniature domas (grape leaves wrapped around rice) and French pickles are also among the choices of delicacies,” Harmons executive chef Aaron Ballard says. The salad bar includes prepared salads, such as frogeye, the vegan Ironman salad—a kale salad blended with flavorful raspberries and nuts—and the corn, black bean and quinoa salad. “Along with the dressings that are prepared in-house is a variety of flavored Sciabica olive oils, which present a flavorful, yet lighter option,” Ballard says. Tip: the salad bar in Holladay happens to be next to their gelato bar that featured flavors such as blood orange, ricotta balsamic and blondie. 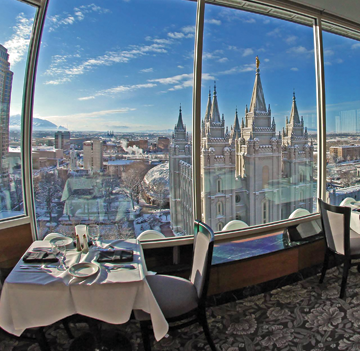 The Roof
Not too many salad bars come with a panoramic view of downtown, but that’s what you find at The Roof, one of four restaurants operated by Temple Square Hospitality. This gourmet buffet includes a choice of four composed salads and a variety of fresh fruits. Executive chef Brian Richter says that the salad options change nightly. His personal favorite is the caprese salad, with fresh mozzarella and basil, but the mango and jicama is also enticing. The bread salad, he says, is fashioned from toasted bread, herbs and tomatoes. House dressings range from vinaigrette to ranch, and the salads complement the nine or so main dishes that include both the traditional prime rib and signature salmon. With its 10th floor location in the Joseph Smith Memorial Building, “It is the best view in the state,” Richter says. 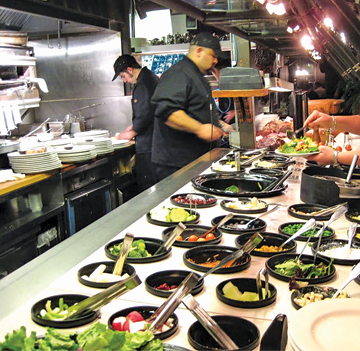 Grub Steak
Steakhouses and salad bars go together like cowboys and six-shooters. But Grub Steak, a Park City mainstay since 1976, isn’t satisfied to rest on any dusty laurels. Its 45-item salad bar includes quinoa, chilled pastas and bean salads along with fresh veggie offerings such as beets, peppercinis, jicama and mushrooms. A variety of housemade bread options such as French or beer bread accompany the salads. Dressings are made in-house at this restaurant located in walking distance from Prospector Square.

Montego Bay/Rainbow casinos
You’ll know you’ve hit the jackpot when grazing at these salad buffets in Wendover. The secret: Go hungry and drink your beverage after you’ve had your salad. At the Montego Bay, the Oceano Buffet is known for its seafood salad, chilled fresh shrimp and fresh fruit. The Rainbow Casino’s Bimini Buffet presents a wide variety of lettuce choices including Caesar, romaine and coleslaw, plus 20 salad toppings. Prepared salads such as crab salad and potato salad are also offered along with the soup of the day.