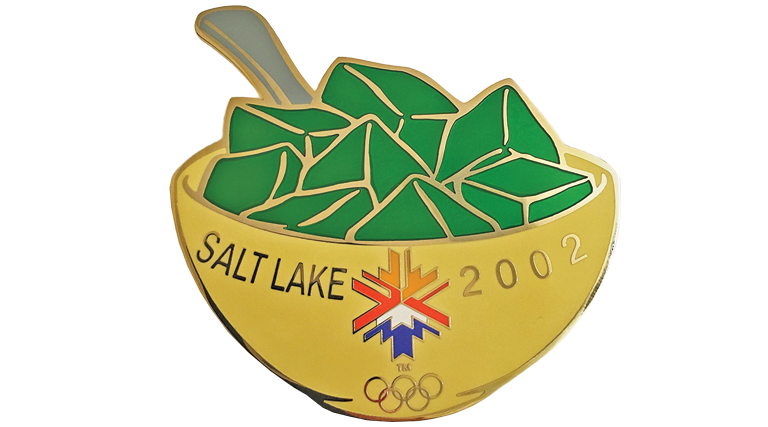 Jiggling through time and space with gelatin salads

Sure, Jell-O is the official snack food of Utah. We even had a green lime Jell-O pin as part of the trading pin collection at the 2002 Olympics. But don’t be confused—the celebration of this wiggly, jiggly substance isn’t defined by Utah. In fact, shortly after Kraft released sales figures saying that Salt Lake City residents consumed more Jell-O than anywhere else in the United States, the good folks of Des Moines, Iowa, stepped up to the challenge and overtook us in 1999. And the gelatin has always called New York home—where it was invented and made famous—and even given to immigrants as they arrived at Ellis Island in the early 1900s.

What started as just four flavors (lemon, orange, strawberry and raspberry) now makes its appearance at church potlucks and family-friendly events across the nation, often as gelatin salads in daring flavor combinations (celery and seasoned tomato anyone?). Be they molded or mixed, Jell-O salads bring history and heritage to many Utah tables each July—making Fourth of July and Pioneer Day festivities a dazzling array of wobbling delights.

For nearly three decades, Cynthia Nay has been making for her family the classic known as Watergate salad or pistachio pineapple delight (a side or dessert salad made with pistachio pudding, canned crushed pineapple, chopped walnuts, Cool Whip and marshmallows). But in all that time, she never tasted it. “I hate Jell-O salads, but the family loves them,” she says. “I’ve never tasted it because of my memories of growing up and thinking Jell-O salads were all gross!”

Some Jell-O remembrances rely on looks as much as tradition. Julee Attig reminisces that the layered rainbow Jell-O salad was, “a Farr West staple for any special event or July holiday. It must have Knox, sweetened condensed milk, time and patience.”

A perennial favorite, Raspberry Delight and its many variations topped the list of most common summer sensations. Jason Myers’ Jell-O tradition was handed down from his mom. “She’s had the recipe for years—written on an old recipe card,” he recalls. Their version features pretzels as the base for the crunchy crust on the bottom with raspberry Jell-O and raspberries on the next layer; cream cheese, sugar and Cool Whip on another layer that’s finally topped with Cool Whip. Several years ago, he made the dish for his mother-in-law at Thanksgiving. Now, when spending holidays or special occasions with her, he says, “she asks for that. She loves it.”

“I’m obsessed with Jell-O,” Jennifer Glass admits. “I serve it all the time.” Two that regularly make it to the buffet table are 7 Up Jell-O salad with crushed pineapple, bananas and mini marshmallows and a strawberry pretzel Jell-O salad that’s a knock off cheesecake-type dish.

A true American success story, Jell-O has weathered the test of time—gracing the family table through war and rations, weddings and funerals, parties and picnics. From julienned carrots in lime gelatin to cottage cheese in orange Jell-O, here’s wishing you a festive month filled with this culinary curiosity.