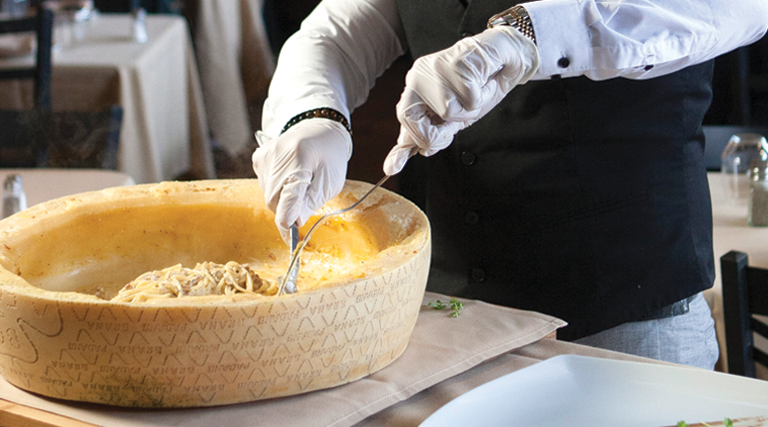 In 2016, before opening his new family-run restaurant, Sicilia Mia, on Highland Drive, Francesco “Chef Franco” Mirenda suffered a sleepless night. The family patriarch was determined to create an original dish to launch their latest venture. In his native Sicily, he says, “We use a lot of cheese. We make homemade cheese all the time. Sicily is really known for ricotta—for any kind of cheese.”

It finally came to him: “We are going to make a carbonara,” he told his co-owner and son, Giuseppe, the next morning.

He then crafted a showstopper of an entrée, using cooking techniques from Sicily. Today, Sicilia Mia patrons are treated to the tableside presentation of spaghetti alla carbonara prepared inside a flaming 2-foot-wide split-wheel of Grana Padano cheese. Made in northern Italy, Grana Padano is a hard, slow-ripened semi-fat cheese similar to Parmigiano Reggiano that’s aged at least 18 months. As it ages, it develops a fragrant and delicate taste, making it, according to Giuseppe, the best cheese in Italy.

Additional Parmigiano Reggiano cheese is added before hot housemade noodles are tossed inside the cheese wheel with eggs and pancetta, an Italian salt-cured bacon spiced with black pepper. As the alcohol flames soften the cheese, the sides of the wheel are scraped and blended into the noodles before twirling the coated pasta onto a plate. Giuseppe says his final touch is “a little singing” and garnishing each diner’s plate with good wishes handwritten in a balsamic reduction. “We make it all homemade to make it the best,” he says. 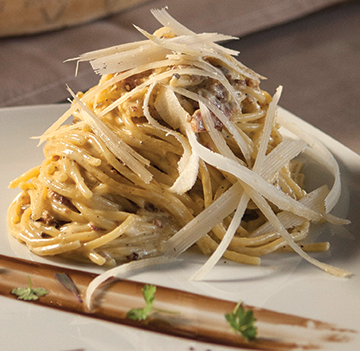 The Sicilian Difference
While Sicilian cuisine has a lot in common with mainland Italian cuisine, Sicilian food also has Greek, Spanish, French and Arabic influences. Giuseppe explains that Sicilian cooking often incorporates more flavoring and spices than traditional Italian fare. “Because Sicily is on the coast, there is a lot of seafood. Garlic, lemon and oranges are picked from the land and incorporated into the cuisine. Eggplant is also traditional.”

In 2012, the Mirendas emigrated from their native Sicily to Utah, choosing the Beehive State because they have relatives here. Prior to their move, they owned five Sicilian restaurants, two in Acquedolci and three in Palermo, and their business was passed down “from chef to chef” through three generations.

Francesco and his father owned restaurants together and after his father died, the family kept them. Giuseppe started working in the kitchen when he was 8 years old. The family operated the restaurants in Acquedolci for 25 years.

“My dad started working in a restaurant when he was 6 years old. Now, my father and I are restaurant owners together—an amazing partnership that couldn’t be better,” Giuseppe says. 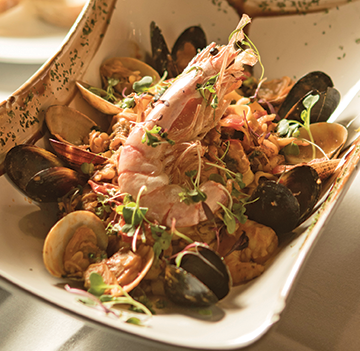 A family affair
The Mirendas’ Utah restaurant group originated in 2014, when they transformed a former Cottonwood Heights gas station into Amici, a beautiful, relaxing 13-table restaurant that caught the attention of locals for both its authentic cuisine and for creating a jewel out of an abandoned eyesore with no apparent future.

“It became a really popular place,” Giuseppe says. “We felt the love from the neighborhood. There was love from everybody.” The partnership behind the restaurant broke apart and Amici closed. The family went on to open several neighborhood bistros and now operates three restaurants—Sicilia Mia, Antica Sicilia and Dolce Sicilia. They anticipate opening of a fourth restaurant, Bella Sicilia, in downtown Salt Lake City later in the spring.

Along with Francesco, Giuseppe’s mom (Margherita), grandmother (Fina), and uncle (Marco) are presently among the restaurant staff. Giuseppe’s mom makes the tiramisu and Marco is the current pastry chef for other delicacies, including cannoli, mousse and pastries—made fresh daily.

All three restaurants serve lasagna from Giuseppe’s grandmother’s recipe and the tableside carbonara is also on the menu at each place. 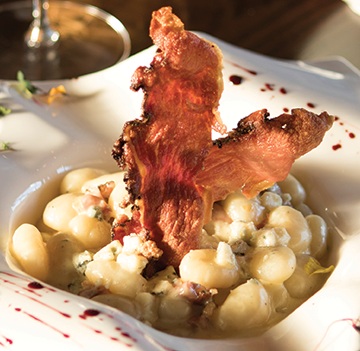 Offerings vary slightly among the three eateries. Gnocchi di spinaci con ricotta, a dish exclusive to Antica Sicilia, features gnocchi made from spinach gnocchi pasta dough. Its tableside presentation begins with the placement of fresh ricotta cheese in the center of the diner’s plate before prosciutto and gnocchi are added around it. A tomato sauce mixture melts the ricotta, combining the flavors of the fresh, delicate cheese and the zest of the tomato.

To commemorate the opening of Dolce Sicilia, Francesco created the restaurant-exclusive gnocchi gorgonzola and speck, featuring housemade pasta and from-scratch creams. Speck is a pork product similar to prosciutto, except that the meat is smoked as a final step in the curing process. “Speck is delicate and wonderful,” Giuseppe says.

A new dish for not-yet-open Bella Sicilia will be cacio pepe, which Giuseppe explains means cheese and pepper. Cacio pepe will be served in a tableside presentation within a cheese wheel and will include creamy pasta and “a little bit of white truffle,” Giuseppe says.

Any visit to Sicilia Mia feels like a special occasion, or at least the highlight of a well-spent day. Reservations are encouraged, but they are a must on weekends, although walk-ins are also allowed to wait in the celebratory atmosphere. If you need to wait, this is an opportunity to observe the Mirenda family greeting people in Italian, or glance at the delicious desserts in the bakery display case. The wait-staff greets diners with a smile and often an enthusiastic, ‘“Bella!” and it is easy to imagine that you have traveled to Sicily for a well-deserved respite.