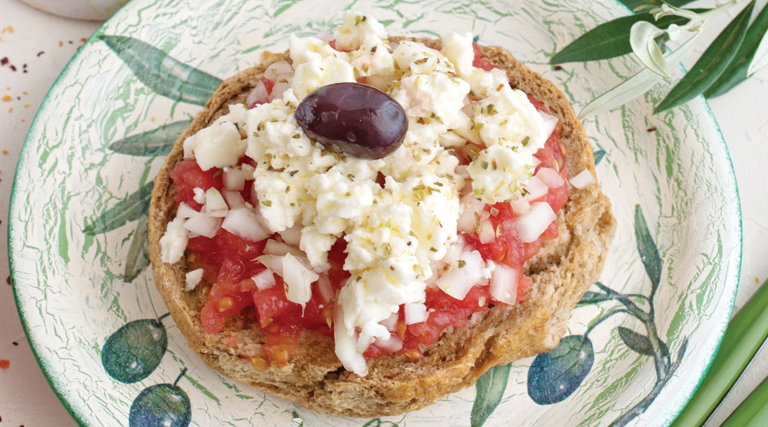 Of all the regional foods I’ve tried in Greece, Cretan cuisine is by far my favorite. From the most rural villages to cities like Chania, you’ll find dishes layered with fresh herbs, cheeses, vegetables and plenty of olive oil—these key ingredients create simple but flavorful dishes. One of the best representations of Cretan cuisine is dakos, a traditional meze (appetizer) that I could eat daily and never tire of.

Similar to Italian bruschetta, dakos is made with a twice-baked rusk bread that is hard as nails, meaning, before serving, it needs to be reconstituted with water or olive oil to soften it. In Crete, rusks are most often barley-based, but wheat- or rye-based are also common.

It’s the toppings that make this dish memorable. For Cretan dakos, rusks are topped with juicy tomatoes (preferably fresh from the vine), soft cheese (such as Cretan mizithra, feta or ricotta) and garnished with a drizzle of extra virgin olive oil and oregano. Complete the dakos with a Kalamata olive on top.

Once assembled, if you look straight down, you might notice the dakos resembles the eye of an owl, which is why in Crete the dish is also referred to as koukouvagia (owl).
If you’re new to Cretan cuisine, dakos is the perfect place to start your journey. You don’t need to travel all the way to Crete to make dakos, as the recipe below easily can be made at home.

Process
Grate tomatoes and put aside in a bowl. Mix in oregano and a pinch of salt with the tomatoes.
Run the rusks under water to lightly moisten them. Plate the rusks and drizzle a generous amount of olive oil over each one.
Spread the tomato mixture on top of each rusk, covering the entire rusk. Add the soft cheese on top.
Drizzle with olive oil and sprinkle additional oregano on top.
To finish, top with a Kalamata olive and enjoy!
Double, triple or quadruple the recipe to make more dakos for your friends and family.